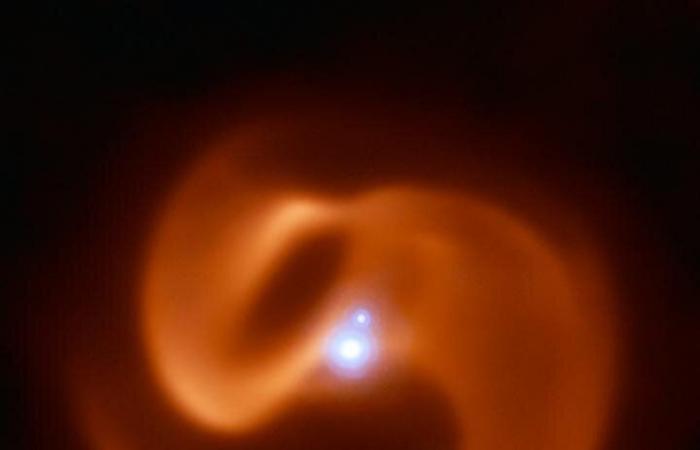 During the COVID lockdown, a Sydney University student wrote a research paper on a star system known as one of the “exotic peacocks of the star world”.

Only one of a hundred million stars makes the cut to a Wolf-Rayet: bright, hot stars that are doomed to collapse in a supernova explosion and only leave a dark residue like a black hole.

The rarest are elegant binary pairs, even among Wolf-Rayets, which, under the right conditions, can pump out large amounts of carbon dust powered by their extreme stellar winds. As the two stars orbit each other, the dust is wrapped in a beautiful glowing soot tail. Only a handful of these shaped spiral flags have ever been discovered.

The target of this study is to be the newest star to join this elite club, but it was found to be breaking all the rules.

“Aside from the breathtaking image, the most remarkable thing about this star system is the way the expansion of its beautiful dust spiral has completely amazed us,” said Yinuo Han, who completed the research during his honorary year at the School of Physics.

“The dust seems to have a mind of its own and floats much slower than the extreme stellar winds that should propel it.”

Astronomers came across this puzzle when the system was discovered two years ago by a team led by Professor Peter Tuthill of the University of Sydney. This star system, 8,000 light years from Earth, was named Apep after the serpentine Egyptian god of chaos.

Using high-resolution imaging techniques at the Very Large Telescope at the European Southern Observatory in Paranal, Chile, the team was able to study the underlying processes that create the spiral we observed.

“The magnification needed to create the images was like seeing a chickpea on a table 50 kilometers away,” Han said.

Going beyond confirming the earlier discovery, the team produced a model that for the first time corresponds to the intricate spiral structure and improves scientists’ ability to understand the extreme nature of these stars.

“The fact that this relatively simple model can reproduce the spiral geometry to this level of detail is just beautiful,” said Professor Tuthill.

However, not all of physics is simple. Mr. Han’s team confirmed that the dust spiral expands four times slower than the measured stellar winds, which is unknown in other systems.

The leading theory to explain this bizarre behavior makes Apep a strong contender for generating a gamma-ray burst when it eventually explodes, something that has never been seen before in the Milky Way.

Dr. Joe Callingham, co-author of the study at the University of Leiden in the Netherlands, said: “Wolf-Rayet star systems have been studied extensively: these are really the peacocks of the star world. Discoveries of these elegantly beautiful but potentially dangerous objects are causing quite a stir in astronomy. ”

He said this paper was one of three published on the Apep system alone this year. Recently, the team showed that Apep is not just made of one Wolf-Rayet star, but actually two. And colleagues from the Institute of Space and Astronautics in Japan will shortly publish a paper on another system, Wolf-Rayet 112. The lead author of that paper, Ryan Lau, co-authored this paper with Mr. Han.

Wolf-Rayet stars are massive stars that have reached their final stable phase before going into supernova and collapsing to form compact remnants like black holes or neutron stars.

“Apep’s main star not only shows the usual extreme behavior of Wolf-Rayets, but also appears to be spinning quickly. This means that it could have all the ingredients to detonate a long burst of gamma rays when it goes into the supernova. ”

Gamma ray explosions are among the most energetic events in the universe. And they are potentially fatal. If a blast of gamma rays hit Earth, it could clear the planet of its precious ozone layer and expose us all to the sun’s ultraviolet radiation. Fortunately, Apep’s axis of rotation means it poses no threat to Earth.

The numbers show Apep’s extreme nature. The two stars are each about 10 to 15 times more massive than the Sun and more than 100,000 times brighter. When the surface of our home star is around 5500 degrees, Wolf-Rayet stars are typically 25,000 degrees or more.

According to the team’s latest findings, the massive stars in the Apep binary orbit each other approximately every 125 years at a distance comparable to the size of our solar system.

“The speeds of the stellar winds generated are just mind-blowing,” said Han. “They turn the stars about 12 million kilometers per hour; that’s 1 percent of the speed of light.

“The dust generated by this system, however, expands much more slowly, at about a quarter of the speed of the stellar wind.”

Mr. Han said the best explanation for this is the rapidly rotating nature of the stars.

“It probably means that stellar winds are launched at different speeds in different directions. The amount of dust we measure is driven by slower winds that are launched near the stellar equator, ”he said.

“Our model now fits the observed data quite well, but we haven’t fully explained the physics of star rotation yet.”

Mr. Han will continue his astronomical studies at Cambridge University when he begins his PhD later this year.

Provided by the University of Sydney

These were the details of the news Bizarre secrets of a ticking time bomb star for this day. We hope that we have succeeded by giving you the full details and information. To follow all our news, you can subscribe to the alerts system or to one of our different systems to provide you with all that is new.