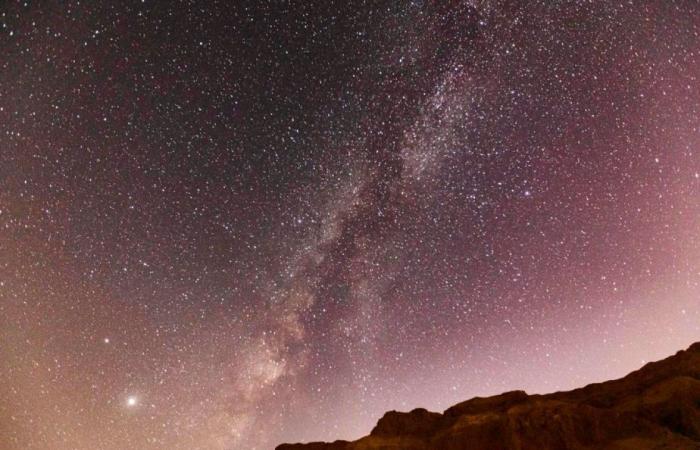 FILE – This long exposure image, taken early August 20, 2020, shows a view of the Milky Way as it rises in the sky over the Jewish Mountains in the occupied West Bank between the Palestinian Jericho and the Israeli Ein Gedi.

A recent study published in the journal Astrobiology found that there are more than a dozen “overinhabitable” worlds in our galaxy.

According to a study by geologist Dirk Schulze-Makuch and astronomers Rene´ Heller and Edward Guinan, astronomers have identified 24 possible “Earth-like” worlds in the Milky Way that are “even better for life than our earth”.

While there are more than 4,000 exoplanets in the Milky Way, astronomers say the list of top contenders could include several factors that can aid life.

One caveat that scientists note is that while some planets might have the right ingredients to support life, that does not mean that life exists on any of these “overinhabitable” planets.

RELATED: Fireball in several east coast states was a meteor, according to experts

It was also found that during this study the initiative was not to look for a perfect mirror image of our earth, but to look beyond an exact twin to our home planet in the hope of finding a similar but sustainable one. The study found that geological history was also taken into account.

“In fact, the earth’s natural history shows that habitability varied significantly across geological eons. This refers not only to large asteroid impacts or other catastrophes that wiped out large parts of the biosphere, but also to prolonged snowball Earth events that resulted in subdued biospheres over millions of years (Ward and Brownlee, 2000) ”the study.

Of the 24 planets that are considered “overinhabitable”, one stands out in particular and meets all of the criteria that scientists use to determine what makes a planet viable.

“Only one of the candidates (KOI 5715.01) meets all three criteria, but has a predicted lower global temperature than the Earth when a gray atmosphere model is used that includes an approximation for a greenhouse effect,” the study says.

“Although none of these planets and planet candidates are closer than 100 light years and are therefore not accessible for high-quality observations from NASA’s TESS mission, we argue that there may be viable planets in the exoplanet sample known today,” says the study.

Astronomers considered several factors that determine what makes a planet “overinhabitable,” including the lifespan of the star around which the planet orbits. The study refers to the fact that life on earth did not arise until 3.5 billion years after it was formed and another 4 billion years before technologically advanced life appears on the planet. The age of the star therefore depends heavily on whether one of its orbiting planets had the chance to create life at all.

Another factor is the composition of the planet. For example, does it contain a core, a mantle and a crust like the earth? In this particular study, scientists believe that an even larger planet and a warmer, more humid planet would actually make the perfect replacement for Earth.

Also, the perfectly sized moon could interfere or interfere with a planet’s ability to support life. Astronomers in this study stated that the earth received all the right ingredients to create a habitable planet, and the size of the moon is actually a big part of that. The size and distance of the Earth’s moon creates a perfect balance for the tides. If the moon were closer or larger, “Earth’s habitability would likely have been worse than due to the tidal lock caused by the gravitational pull of such a hypothetical moon. Once in tidal lock, the Earth’s day length could be several times its current value, which would have a dramatic impact on the surface distribution of sunlight as an external source of energy. ”

Despite these observations, scientists say the ultimate determinant of finding another habitable planet is being able to look into the history of the planet’s evolution, which is virtually impossible, the study said.

“Our goal here is not to identify potential targets for follow-up observations, but to illustrate that overinhabitable worlds may already be among the planets discovered,” the study continued.

However, this does not mean that it is impossible to find another, possibly better “overinhabitable” planet.

“Should such a planet be discovered within about 100 light years in the near future, such a world would have a higher priority for follow-up observations in search of extrasolar life than the most Earth-like planets,” the study concluded.

These were the details of the news Astronomers find 24 “overinhabitable” planets in the Milky Way for this day. We hope that we have succeeded by giving you the full details and information. To follow all our news, you can subscribe to the alerts system or to one of our different systems to provide you with all that is new.

PREV US secures deal on Philippines bases to complete arc around China
NEXT Hands off Africa, says Pope Francis in Kinshasa speech