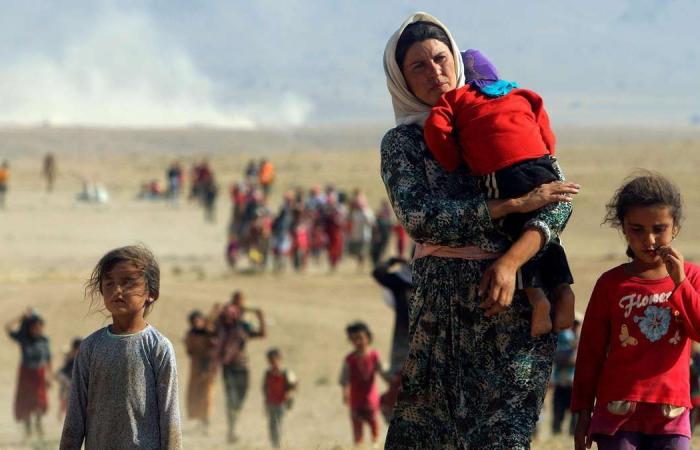 Thank you for your reading and interest in the news Iraq: Sinjar deal between Baghdad and Erbil 'significant step' towards improving relations and now with details

Hind Al Soulia - Riyadh - An agreement between the Iraqi administration and the Kurdish Regional Government over the security and governance of Sinjar is a significant step towards improving relations, officials and analysts said on Sunday.

The administration of Sinjar, which is in a disputed area in the northern Nineveh province, has been one of the issues over which Baghdad and Erbil have failed to find mutual ground.

The deal is significant because it could allow the return of about 200,000 displaced Yazidis and others, Lahib Higel, Crisis Group's senior analyst for Iraq, told The National.

“It is the first understanding between Baghdad and Erbil on a specific area of the disputed territories that addresses governance and security,” Ms Higel said.

But she said its implementation would be difficult because all external forces are supposed to withdraw, including the Kurdistan Workers' Party (PKK), who are considered a terrorist organisation by the US, and the Popular Mobilisation Forces, also known as the Hashed Al Shaabi.

"Unless there can be a negotiated settlement there is a risk for armed confrontation with the new Iraqi security forces that will control the area."

In 2014, Sinjar was overrun by ISIS and liberated by an array of armed forces the following year, but little has been rebuilt.

Water and electricity are scarce in the city, where ISIS killed thousands of Yazidis and forced many women into sexual slavery.

The terrorist group considers Yazidis to be devil worshippers. It held huge areas of Iraq and Syria until 2017 when it was driven out by US-led coalition forces.

The Mayor of Sinjar, Mahma Khalil, said the deal would remove all armed factions, including those with close ties to the PKK and the militia umbrella group, Hashed Al Shaabi.

“It will end the power of outlaw groups and paves the way for the reconstruction of the city and the full return of its people, in co-ordination with the KRG,” Mr Khalil said.

An official in the KRG said that the agreement would face challenges from the PKK and Hashed Al Shaabi.

“But I am sure the KRG and the federal government will overcome this. I believe the agreement will help both sides in preventing the re-emergence of terrorist groups,” he said.

The official said that any agreement between Erbil and Baghdad presents “a significant step towards normalisation” and finding a way to resolve the outstanding issues between the two sides.

The UN and US welcomed the deal and said it would pave the way for reconstruction in the north, in what it called “a first and important step in the right direction”.

Ms Hennis-Plasschaert said it was high time to reach out to the people of Sinjar, to “make them feel that they are, indeed, part of the broader community”.

Washington said it hoped the agreement would ”create conditions that foster the revival of Sinjar and the safe and voluntary return of those who were displaced by ISIS”.

"The interests of Sinjaris, particularly the victims of genocide, should remain at the heart of any plan to restore lasting peace and security," US State Department spokeswoman Morgan Ortagus said.

These were the details of the news Iraq: Sinjar deal between Baghdad and Erbil 'significant step' towards improving relations for this day. We hope that we have succeeded by giving you the full details and information. To follow all our news, you can subscribe to the alerts system or to one of our different systems to provide you with all that is new.