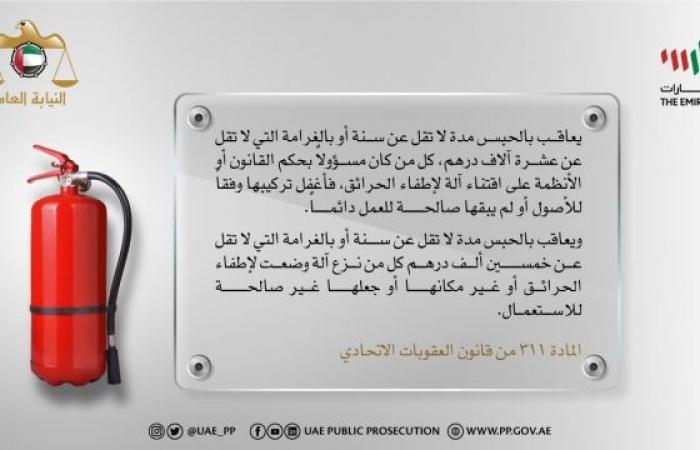 The State Prosecutor’s Office clarified, through a post it has today on its social media accounts, the responsibility for removing fire extinguishers or rendering them unfit for use, as well as the responsibility of whoever is by law responsible for installing them, neglecting to install them according to the principles or not keeping them in working condition always.

It is noteworthy that the publication of these tweets comes within the framework of the Public Prosecution’s ongoing campaign to enhance the legal culture among members of society, and raise the level of public awareness of the law, with the aim of spreading the culture of law as a way of life, and contributing to reducing the percentage of violations resulting from ignorance of the law.

These were the details of the news The State Public Prosecution clarifies the responsibility for removing fire extinguishing... for this day. We hope that we have succeeded by giving you the full details and information. To follow all our news, you can subscribe to the alerts system or to one of our different systems to provide you with all that is new.