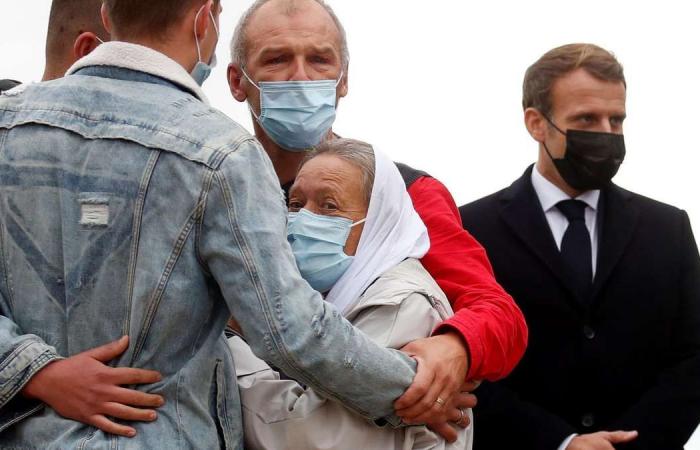 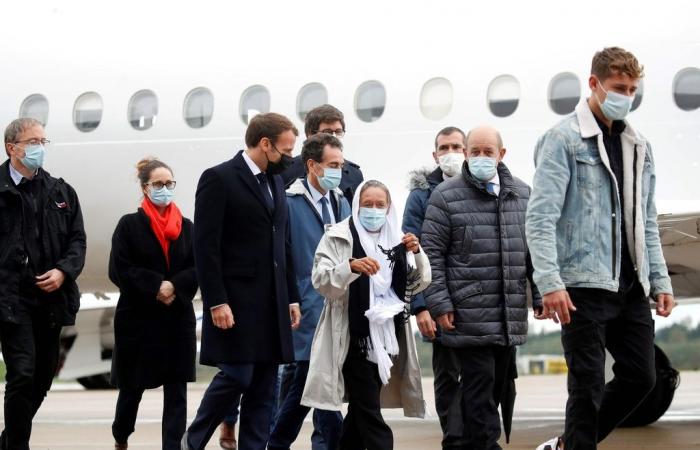 Hind Al Soulia - Riyadh - An elderly French aid worker who was kidnapped by extremists in Mali has received a presidential welcome on her return home.

President Emmanuel Macron greeted Sophie Petronin at an airbase outside Paris at noon - a day after she was released by her captors.

The 75-year-old spent four years in captivity after being taken by a militia group in the west African nation. She is the last known French citizen to be held hostage anywhere around the world.

Relatives gave her a huge embrace while Mr Macron watched on as the humanitarian stepped off the plane.

Wearing a face mask and a white headscarf, she hugged her three grandchildren and spoke to Mr Macron for several minutes before heading to the base’s terminal.

No public statements were made, though Mr Macron had earlier called Ms Petronin's release an "immense relief".

"The French rejoice with me to finally have you back, dear Sophie Petronin. Welcome home!" Mr Macron tweeted after meeting her.

Ms Petronin was released by her captors along with a prominent Malian politician, Soumaila Cisse, and two Italian hostages, who were also on their way home.

Mr Cisse, a three-time presidential candidate and former opposition leader, was also hugged by loved ones at the Bamako airport and greeted by cheering crowds on his way home.

"It was a difficult period, but it has been overcome," the 70-year-old said.

Italian priest Pier Luigi Maccalli, who was abducted in neighbouring Niger in 2018, and Nicola Chiacchio, who went missing last year while on a solo bicycle trip, were also freed.

Mali's government has not revealed the circumstances of the releases, which followed talks with hostage-takers.

But Malian authorities freed more than 100 prisoners over the weekend, sparking speculation of swaps for Ms Petronin and Mr Cisse.

Late on Thursday, a frail-looking Ms Petronin, who is known as "Mama Sophie" and dedicated years of her life to a charity for malnourished children, was twirled around by her son, Sebastien Chadaud, as she arrived in Bamako.

Footage shared on social media showed the mother and son Sebastien Chadaud with their foreheads pressed together, as Ms Petronin told him: "You were there by my side telling me, hang in there."

Her son later told reporters: “She’s like a block of granite, my mum.”

In an unexpected development, the Malian prime minister's office announced that two Italian nationals had also been freed.

Mali's government has been struggling against a brutal extremist insurgency that emerged in the north in 2012, which has since spread to central Mali as well as to Burkina Faso and Niger.

The extremist groups are linked to Al Qaeda.

Thousands of soldiers and civilians have died in the conflict and hundreds of thousands have been displaced, and kidnappings are common.

For Mali, I will pray and implore the blessing and the mercy of Allah, because I am a Muslim

Mali's former colonial power France has 5,100 soldiers deployed across the Sahel as part of its anti-extremist Operation Barkhane.

Ms Petronin was abducted by gunmen on December 24, 2016, in the northern city of Gao, where she did her charitable work.

Mr Cisse was kidnapped on March 25 while campaigning in his home region of Niafounke, central Mali, ahead of parliamentary elections.

Speaking to reporters, Ms Petronin thanked the Malian and French governments for their help.

"For Mali, I will pray and implore the blessing and the mercy of Allah, because I am a Muslim," she said.

"You say Sophie, but it's Mariam you have before you," she added.

Ms Petronin appeared in good spirits despite concerns about her health after a 2018 hostage video showed her looking emaciated.

The footage triggered alarm among her family members, who pressured Mr Macron to negotiate with her captors.

France's president had said several times that his services were working "tirelessly" for Ms Petronin's release.

One of the hostage negotiators, who requested anonymity, told AFP the talks remained difficult to the end.

The intermediary said releasing prisoners had been unavoidable. "Yes, terrorists were released," he said. "We had to obtain the release."

The office of Mali's prime minister said the four hostages had been held by the Group to Support Islam and Muslims.

The alliance comprises jihadist groups aligned to al-Qaeda, and has claimed responsibility for some of the biggest attacks in the Sahel.

The prisoner release comes as an interim government is due to govern Mali for 18 months, before staging elections, after a military junta overthrew president Ibrahim Boubacar Keita in August.

The kidnapping of former opposition leader Mr Cisse was one of the factors that fuelled popular protests leading to Mr Keita's ouster, over his perceived inability to crush the Islamist insurgency.

Several hostages remain detained by militant groups in the Sahel.

These were the details of the news Released French aid worker greeted by Emmanuel Macron on return home for this day. We hope that we have succeeded by giving you the full details and information. To follow all our news, you can subscribe to the alerts system or to one of our different systems to provide you with all that is new.