Fierce battles in Karabakh .. Russia does not intend to intervene... 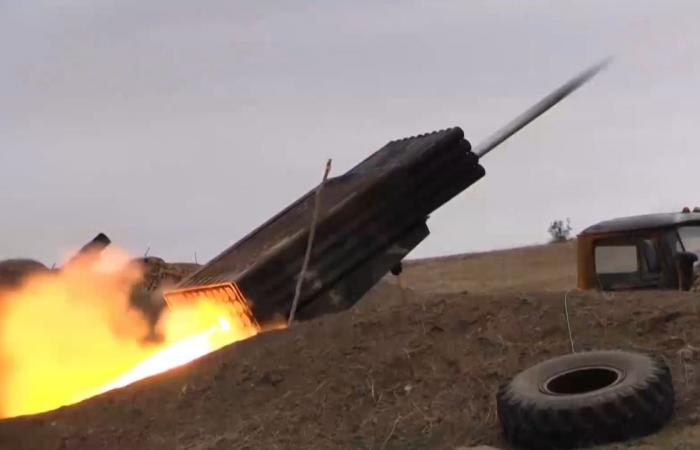 Fierce battles continue in the Nagorno Karabakh region between Armenian and Azerbaijani forces, and while Russia distanced itself from interfering militarily in the conflict, Armenia accused Turkey of working to revive the Ottoman Empire by supporting Azerbaijan.

Sources in the Azeri Ministry of Defense said that its forces’ operations are continuing on all fronts.

The Anadolu Agency reported that the Azerbaijani army’s air defense systems impeded an Armenian long-range missile attack on the city of “Havela”, as the attack came after targeting the “Baku Tbilisi Kars” pipeline to transport natural gas on Tuesday evening.

The Armenian army had announced the killing of 60 Azeri soldiers and the destruction of dozens of heavy machinery and weapons during repelling an attack by the Azeri forces on Gabriel.

He added that the missile and artillery shelling renewed the neighboring city of Shushi, and led to civilian casualties.

Fighting axes
Earlier, the Ministry of Defense of the Nagorno Karabakh region, which is not recognized internationally, reported renewed fighting between its forces and the Azerbaijani army on various axes of fighting within the region.

The ministry added that the fighting focused on the southern and northern axes of the battle lines, referring to what it considered a decline in the activities of the Azeri forces.

The Prime Minister of Armenia said that the so-called Self-Defense Forces in Nagorno Karabakh had tactically retreated in the axis of the city of Gabriel in the southeast of the region to besiege the Azerbaijani army, and that the operation is proceeding successfully.

The Armenian Ministry of Defense announced that the “Karabakh” forces repelled an attack by the Azeri army, killing 20 Azeri soldiers, and destroying a number of military vehicles and heavy weapons, forcing him to withdraw to the rear, according to the ministry.

Citizens of the Azerbaijani villages in the east of the Nagorno Karabakh region have resorted to schools to take shelter from the Armenian bombardment, as the villages of Agha Badi and Aghdam regions have been under constant bombardment since the start of the fighting on 27 September.

Political developments
Russia has made it clear that its obligations to Armenia’s security do not apply to Karabakh.

Kremlin spokesman Dmitry Peskov stated that Russia’s obligations towards the security of Armenia within the framework of the Collective Security Treaty Organization do not apply to Naourni Karabakh.

As for Armenian Prime Minister Nikol Pashinyan, he said that his country is ready to recognize the independence of what he called the “Karabakh Republic” if this would help in resolving the crisis.

Pashinyan added, during a call with Russian President Vladimir Putin, that the settlement of the conflict must have compromises and concessions, and that his country is ready for that if Azerbaijan wishes to do so, he said.

Pashinyan emphasized that the conflict in Nagorny Karabakh went outside the borders of the region and became a threat to international security, and accused Turkey of seeking to revive the Ottoman Empire and repeat what he described as the Armenian genocide.

Critical stage
For his part, Azerbaijani President Ilham Aliyev told Russian Channel One that his country would return to talks with Armenia after the “critical” phase of the military conflict ends.

He explained that the international community – including the Minsk Group heads – stated earlier that the status quo in the Nagorno Karabakh case could not be accepted.

Aliyev added that Turkey “as a big country and our neighbor in the South Caucasus” has the right to participate in the mediation, after Pashinyan told Time magazine that his country will not agree to a ceasefire unless Turkey stops engaging in the conflict and the “mercenaries” are withdrawn.

Aliyev had spoken by phone with Putin, where the latter described what was happening in the region as a tragedy, and called for a ceasefire as soon as possible.

In Paris, French Foreign Minister Jean-Yves Le Drian told the Foreign Affairs Committee of the National Assembly that “what is new in the matter is the presence of a military intervention by Turkey, which could lead to fueling and internationalizing the conflict.”

These were the details of the news Fierce battles in Karabakh .. Russia does not intend to intervene... for this day. We hope that we have succeeded by giving you the full details and information. To follow all our news, you can subscribe to the alerts system or to one of our different systems to provide you with all that is new.