The intrusive weapon terrorizes the Bekaa … Who will “avenge” the... 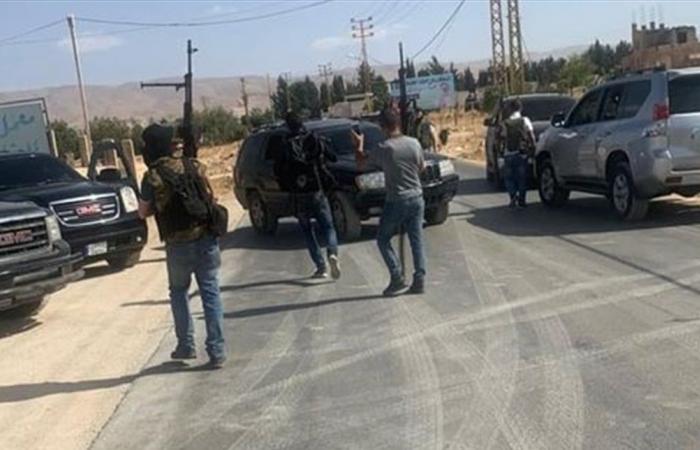 Nidaa al-Watan wrote, “The weak state is ruled by strongmen who do not value the constitution and ignore the laws, so they are getting stronger and weaker the state.” Who did the President of the Republic Michel Aoun mean with this tweet yesterday? His “Hezbollah” ally, resplendent with the glow of his weapons on the state and the constitution? Or the militants in the Bekaa who boasted of broadcasting pictures and videos documenting their military strikes in conjunction with the launch of his position? If he did not mean this or that, then his tweet becomes meaningless … Your Excellency, the President, it is known that you are friendly with Hezbollah and defend its weapons “on top of the roof”, but you have probably seen, as the general public of the Lebanese, during the last hours, scenes of intrusive weapons arriving and roaming Flaunting his authority on the national soil in the Bekaa? What are you doing as the Supreme Commander of the Armed Forces? Do you surrender and surrender to the reality of hijacking the state’s prestige in Bekaa, or raise the state’s flag and demand a “revenge” for legitimacy?

The security situation in the Bekaa is dangerous, and the Bekaa’is complain about the state’s scandalous absence from the scene of revenge tribal disputes. After two days of continuous military parades that were broadcast on social networking sites of tribal militants armed with various types of weapons and machine guns and missiles, after the killing of a young man from the Al-Shams clan by gunmen from the Jaafar clan as a result of a revenge operation, the governor of Baalbek Hermel reassured Bashir Khader via Twitter Noting that the Lebanese army sent its reinforcements to the region “to withdraw the fuse of sedition, extend security and arrest outlaws,” warning that “what is happening in Baalbek is extremely dangerous and harmful to Baalbek-Hermel and its people.”

The people of the Bekaa, from Baalbek to Hermel, suffer before others from the repercussions of the security breakdown and the weapons that are spread without deterrence in the hands of outlaws. In their homes and on the roads, firing shots and missiles in the air, like Hollywood action films, in the midst of a complete absence of state security, these people encouraged more rebellion and austerity. Set the position.”Weapon is the adornment of men,” “blood with blood,” and “revenge establishes presence and strength” are the tribal bases in Baalbek-Hermel and other areas that witness similar appearances. Failure to adhere to them indicates subservience, loss of courage and masculinity. The Bekaa witnessed a number of revenge operations in which the Lebanese army personnel had a share as well, against the background of revenge operations by military elements for their involvement in certain arrests or firing at gunmen who did not comply with a security checkpoint. Likewise, the pace of revenge operations between families and clans in the region is escalating, causing the state to lose much of its presence and prestige in order for the “law of the jungle” to prevail.

The killing of Muhammad Shamas last Sunday in the Nabi Anam neighborhood in Baalbek sparked the fire front between the Jaafar and Shams clans. In the details of the incident, as reported by field sources, an individual problem occurred two years ago between young men from the two clans, during which two brothers of Muhammad Shamas killed a young man from the Jaafar family in the market of Baalbek, and the efforts led to the handing over of the perpetrators to the Lebanese state and restricting the “opponents” of the Jaafar clan to the two youth Without harming their family. Accordingly, their brother opened a store in the Nabi Anam neighborhood and began working in it. After one of his brothers was released from prison days before he was killed, and when the young men of the Jaafar clan were unable to kill him, Muhammad was liquidated in his place on Sunday afternoon, where the revenge operation was accompanied by shooting and intimidation of citizens to open the way in front of the car that carried out the operation and secure its access to Al-Sharawna, to begin The joy of revenge, when the city was torched with rockets and bullets for hours. This development prompted the al-Shamas family to prepare for revenge against the four youths who carried out the revenge operation. In recent days, “military parades” of the two tribes’ gunmen armed with machine guns, shells and missiles loaded on columns of cars and four-wheel-drive vehicles have followed.

In light of the deployment of the army and the sending of reinforcements to the region, it seems that the political and security contacts have cooled the ground of the problem, especially since the Jaafar clan issued a statement in which it regretted what had happened and relied on the wisdom of the wise people in the Shams family.

These were the details of the news The intrusive weapon terrorizes the Bekaa … Who will “avenge” the... for this day. We hope that we have succeeded by giving you the full details and information. To follow all our news, you can subscribe to the alerts system or to one of our different systems to provide you with all that is new.