Assange’s fate is on hold until next year: the empire’s crime... 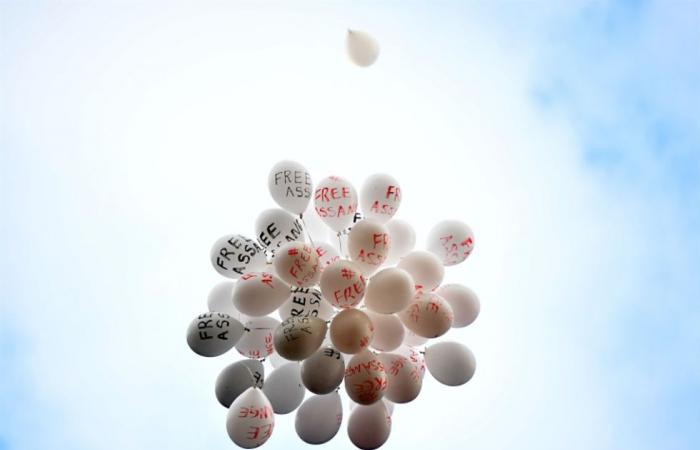 Over the past few weeks, Julian Assange’s trial sessions were held at the Old Bailey Criminal Court in London, ending with setting the date of next January 4 as the date for the decision to extradite the founder of “WikiLeaks” to the United States, where he faces, under the “law The American espionage, 18 charges, against the background of the organization’s website publishing hundreds of thousands of secret documents that exposed US and military “diplomatic” activities. Once again, the trial showed that the crime is still going on by the British and American governments, and their intelligence agencies, after the unveiling of evidence that is revealed in succession, to tell part of the ongoing violations of Assange’s right.
In a unique way, the United States enforced the law in proportion to its case against Julian Assange. Under the 2003 US-British extradition treaty, the US prosecutor submitted a request to compel the United Kingdom to extradite the founder of “WikiLeaks”, despite the fact that Article 4 of the aforementioned treaty states that “extradition is not permissible if the crime for which extradition is requested is a political crime.” “. The agility of the American hand reflected the contradiction in Washington’s claims to implement the “espionage law” against Assange, an Australian, while depriving him of protection under another law, which is the First Amendment to the Constitution that is supposed to guarantee the “right to freedom of expression.”
Since the US Army Counter-Espionage Center started, in 2008, to “destroy or destroy the center of gravity” (referring to “WikiLeaks”), all US agencies have been mobilized for the same purpose; With the accession of the “Pentagon”, the CIA, the “National Security Agency” and the State Department, to the leadership of the center, special task forces were formed to overthrow “WikiLeaks” and its founder. The first operation against Assange dates back to September 2010, when his belongings, including three laptops and hard drives, disappeared from the plane that was taking him from Sweden to Germany, to be followed by another in 2011. At that time, agents from the “FBI” approached FBI, to Iceland to recruit an informant named Segodor Thordarsson, to spy on WikiLeaks. Wherever Assange went, surveillance intensified, leading to his asylum in the Ecuadorian embassy in Britain (June 2012) to avoid extraditing him to Sweden, where he would face sexual assault charges against two women, which turned out to be fabricated (which Stockholm had officially dropped earlier last year). At this time, the US and British National Security Agencies were tracking people who logged into the “WikiLeaks” site, so that US financial institutions sought to cripple the site financially by forbidding donors to use credit cards to support the organization. The culmination of the extremist measures against Assange came with the arrival of Lenin Moreno, succeeding Raphael Correa, to the presidency in Ecuador in 2017.

Fed up with the “heavy guest,” the man hired a private Spanish security company, UC Global, to spy on him and get rid of him if possible (plans to poison Assange or kidnap him from the embassy were discussed between US intelligence officials and the security company). In the embassy, ​​where he stayed for seven years before his delivery in April 2019, and his detention in Belmarsh prison for serious security cases, cameras equipped with microphones were installed and broadcast live “so that our friends in the United States” can reach the embassy whenever they want, according to the founder The director of UC Global, David Morales. This is part of what two former employees of the company recounted in their testimony before the court last week. One of them explained that attending a trade fair for the security sector in Las Vegas, where he secured a contract with the Las Vegas Sands company, owned by American billionaire Sheldon Adelson, a supporter of Donald Trump (he was a presidential candidate at the time), changed everything. Morales returned to the company’s offices in Jerez, southern Spain, to announce that “(we) will play in the big league,” with UC Global switching to the “dark side,” according to the witness who confirmed that a complex process has been launched to monitor Assange, which will accelerate with taking over Trump will be in office at the beginning of 2017, when Morales’ trips to the United States will be repeated.
The context confirms the impossibility of Assange getting a fair trial; As of 2017, it was also found that the husband of the first judge in charge of the Assange case, Emma Arbuthnot, and her son, had links with people whose names were mentioned in the context of criminal cases published by “WikiLeaks”. When the Arbuthnot family’s ties to Britain’s intelligence and defense industries became known, she withdrew from the case, but she remains the principal investigative judge in Westminster, meaning she oversees the lower-ranking judges. One of them, Vanessa Barritzer, who presided over Assange’s trial, and concluded after nearly four weeks of hearings at the Old Bailey criminal court, to postpone the handover decision until after the US presidential elections on the third of next month, after Assange’s lawyer, Edward Fitzgerald, that the handover of his client was politically motivated during the Trump era.
Assange’s deteriorating health and psychological state was sufficient to prevent his extradition to Washington; Several psychiatrists, most recently the Emeritus Professor of Psychiatry at King’s College, Michael Copelman, have confirmed that he has suicidal tendencies. In his court testimony, Kopelman spoke of “acute depression” and “symptoms of psychosis,” among them the auditory hallucinations that appeared on Assange in his maximum security cell in Belmarsh prison. In the background of this lies a long family history with suicide, which makes the possibility likely for a person who has “intentionally, over several years, been subjected to various and severe forms of cruel, inhuman and degrading punishment, the accumulated effects of which can only be described as psychological torture,” as he described The United Nations Special Rapporteur on torture, Niels Melzer.

These were the details of the news Assange’s fate is on hold until next year: the empire’s crime... for this day. We hope that we have succeeded by giving you the full details and information. To follow all our news, you can subscribe to the alerts system or to one of our different systems to provide you with all that is new.