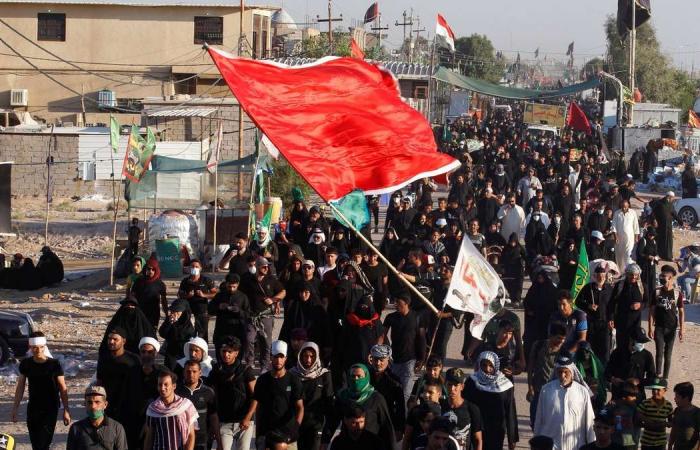 Thank you for your reading and interest in the news Iraq: Sadr calls on supporters to crackdown on anti-government protests and now with details

Dozens of anti-government protesters were injured during the annual Shiite pilgrimage of Arbaeen late Tuesday while carrying pictures of victims of last year's demonstrations and chanting against the government and Iranian interference.

“Those [who protested] clearly sympathise with ISIS and the Baath regime and are against religion,” Mr Al Sadr said in a tweet.

The cleric, who had previously been an open supporter of the demonstrations, threatened protesters that he would mobilise his followers to prevent future protests from occurring.

Clashes between security forces and protesters took place between two important holy shrines in the city on Tuesday. They was triggered when a group of pilgrims from other parts of southern Iraq entered the visitation area separating the Imam Hussein and Imam Abbas shrines. They held banners with pictures of protesters killed in mass demonstrations last year and chanted anti-government slogans.

The Shiite pilgrimage marks the end of 40 days of mourning for Imam Hussein, Prophet Mohammed’s grandson.

Armed groups with ties to Iraq’s top Shiite Cleric Ayatollah Ali Al Sistani, who are in charge of guarding the shrines, attempted to keep the group from intermingling with other pilgrims.

Protesters were beaten with sticks after police were dispatched to the area. Among the injured were 30 demonstrators and less than a dozen pilgrims, including women. Some of the militiamen guarding the shrines were also injured.

“The attacks that occurred are a clear violation of human rights, those protesting should have not been harmed, they are only protesting for their basic rights,” Hassan Ahmed, an activist from Baghdad, told The National.

Security forces, government and religious authorities must do more to ensure that citizens are protected, he said.

“Authorities must be aware that the pilgrimage to Karbala this year has a different tone to it, it’s more political, which reflects different ideologies among the Iraqi youth,” Mr Ahmed said.

Security forces held “infiltrators” responsible for the attacks that occurred.

“During the pilgrimage in Karbala, a number of demonstrators from different governorates gathered yesterday afternoon in Karbala and headed towards the Qibla Gate and tried to enter through a closed road,” a statement by security forces said.

The protesters “attacked security forces with stones” which then triggered the violence, it said.

The pilgrimage is a key part of religious and social public rights of Iraqis Ali Al Bayati, a member of the Iraqi Human Rights Commission, said.

“The citizen must adhere to the instructions laid down by the authorities supervising the pilgrimage. Security officials must also understand the difficult conditions in which people are in such as fear of catching coronavirus,” Mr Al Bayati said.

It comes as Prime Minister Mustafa Al Kadhimi ordered the launch of a committee to investigate security breaches in the country.

For months US diplomats and troops across the country have been targeted in dozens of missile attacks blamed by Washington on pro-Iranian armed factions.

Several rockets landed in a residential area near Baghdad's Green Zone overnight but did not explode early Monday raising concerns about the safety of Iraqi civilians.

A Katyusha rocket attack struck a residential home killing six people – all of them women and children – last Monday.

The committee will “obtain any information it requires from any party to carry out its investigations,” a statement by the prime minister’s office said.

“The findings of the committee will contribute to enhancing the authority of the state. Only the Iraqi state has the authority to decide on matters of war and peace,” it said.

New protests erupted on October 1 in Baghdad to mark a year since mass anti-government protests engulfed the capital and the predominately Shiite south. A year ago, tens of thousands of Iraqi youth marched to decry rampant corruption and demanded early elections, better services and jobs. More than 550 people, mostly protesters, died by gunfire from Iraqi security forces who used live ammunition and tear gas to disperse crowds.

These were the details of the news Iraq: Sadr calls on supporters to crackdown on anti-government protests for this day. We hope that we have succeeded by giving you the full details and information. To follow all our news, you can subscribe to the alerts system or to one of our different systems to provide you with all that is new.