The President of Azerbaijan talks to Al Jazeera about the battles... 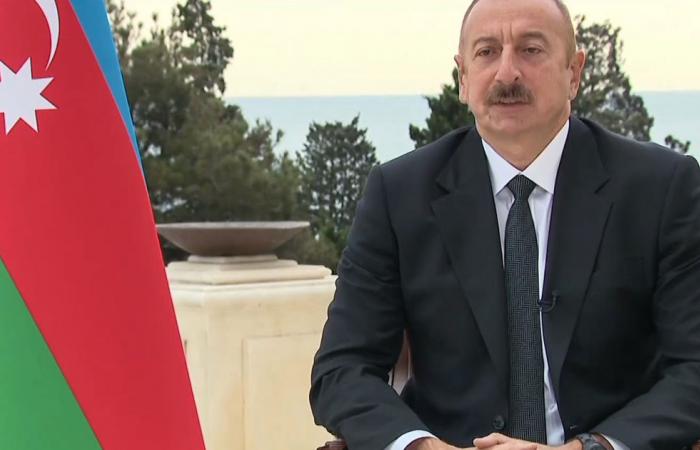 President of Azerbaijan Ilham Aliyev spoke to Al Jazeera about the ongoing battles in the Nagorno Karabakh region between his forces and Armenian forces. In parallel with international calls for a political solution, Armenia expressed its readiness for a ceasefire, while Turkish President Recep Tayyip Erdogan stressed the need to “liberate” the region from the Armenian occupation.

In his interview on Friday, the Azerbaijani President held Armenia responsible for the escalation in the region and the continuation of the conflict in it, accusing it of seeking to preserve the areas “it occupied in the past.”

Aliyev said, “The first reason for the escalation is that Armenia does not want peace, because it wants to keep the territories it occupies permanently, and it does not want the situation to change. Armenia had to show its goodwill to respect international decisions.”

“In 1993 Armenia occupied this region, and the Security Council issued 4 resolutions calling for the rapid and unconditional withdrawal of Armenian forces from the region. The Minsk Group was established to facilitate the implementation of these decisions,” he added.

“As for the other reason, it is a lack of determination on the part of the mediators, and a lack of pressure on Armenia to start implementing the UN Security Council resolutions,” he said.

In a related context, the Azerbaijani President strongly denied Armenia’s accusations to Turkey of sending Syrian fighters to Azerbaijan, and said that these accusations were fabricated.

In response to a question by Al-Jazeera in this regard, Aliyev likened these accusations to what was said about a Turkish fighter shooting down an Armenian fighter a few days ago.

For its part, the Armenian Foreign Ministry announced that Armenia is ready to start negotiations for a ceasefire in Karabakh under the auspices of the Minsk Group of the Organization for Security and Cooperation in Europe.

The Armenian Foreign Ministry welcomed the call of the Presidents of Russia, the United States and France for a voyage ceasefire in Karabakh.

Political solution
Regarding the diplomatic movement to stop the fighting in Nagorny Karabakh, Russian President Vladimir Putin stressed on Friday in a phone call with Armenian Prime Minister Niko Pashinyan the need for an immediate cessation of hostilities in the region and the resumption of political efforts in line with the data of the joint Russian-American-French statement.

The Kremlin said – in a statement – that the two sides expressed their concern about the information that talks about the participation of armed men coming from the Middle East in the ongoing battles in the region.

In the same context, the Secretary of the Russian Security Council Nikolai Patrushev held talks in Geneva with the US President’s National Security Adviser Robert O’Brien.

According to a spokesman for the Russian Security Council, the two sides stressed the need to launch the political-diplomatic process in Karabakh as soon as possible, and that the Russian and American visions are identical on the problem of the region.

In the same context, French President Emmanuel Macron spoke on Friday with Armenian Prime Minister Nikole Pashinyan and Azerbaijani President Ilham Aliyev, and renewed the call for a ceasefire between the two countries.

The French presidency said that Macron proposed a new approach to resume talks between Armenia and Azerbaijan within the framework of the Minsk Group.

The Secretary-General of the United Nations, Antonio Guterres, also renewed his call to stop the fighting in Nagorno Karabakh.

Guterres stressed that dialogue is the only way to a sustainable solution, stressing that there is no military solution to the conflict in Karabakh.

Liberate Karabakh
For his part, Turkish President Recep Tayyip Erdogan affirmed that “the struggle in Azerbaijan will continue until the liberation of Karabakh region from the Armenian occupation.”

In a speech during the inauguration of a medical city on Friday in Konya (south of the capital, Ankara), Erdogan said that the attempts to blockade Turkey are unfolding and that they will not succeed in achieving their goals.

He added that, looking at the places of crises extending from Syria to the Mediterranean and the Caucasus, the attempts to blockade Turkey are unfolding, stressing that the latter is keen on its strength and unity to thwart all these attempts.

The Turkish president indicated that Armenia attacked Azerbaijan again at a time when the issue of Nagorny Karabakh, which was occupied by Armenia by committing despicable massacres, was not resolved.

Erdogan pointed out that, after its recent attack, Armenia faced an unexpected result.

He pointed out that “sister Azerbaijan has started a large military operation in order to defend its soil and liberate Karabakh,” stressing that “the Azerbaijani army that is advancing successfully on the front has succeeded in liberating many regions.”

Sixth day fights
On the ground, battles continued on Friday for the sixth consecutive day between Armenian and Azeri forces, and each side stressed that it had inflicted heavy losses on the second party.

And the Armenian Ministry of Defense declared a state of general alert in the army, and said that its forces had successfully responded to the attacks of the Azerbaijani army and that they had inflicted losses on soldiers and equipment.

The areas of “Martakert” and “Agadam” in the north, “Martoni” and “Fozuli” in the south are witnessing the fiercest battles between the two armies.

On the other side, the Al-Jazeera correspondent quoted Azeri military sources as saying that the army had taken control of the heights overlooking the Madagues region in Karabakh.

The Azeri army showed pictures it said were weapons and military vehicles captured from Armenian forces.

These were the details of the news The President of Azerbaijan talks to Al Jazeera about the battles... for this day. We hope that we have succeeded by giving you the full details and information. To follow all our news, you can subscribe to the alerts system or to one of our different systems to provide you with all that is new.