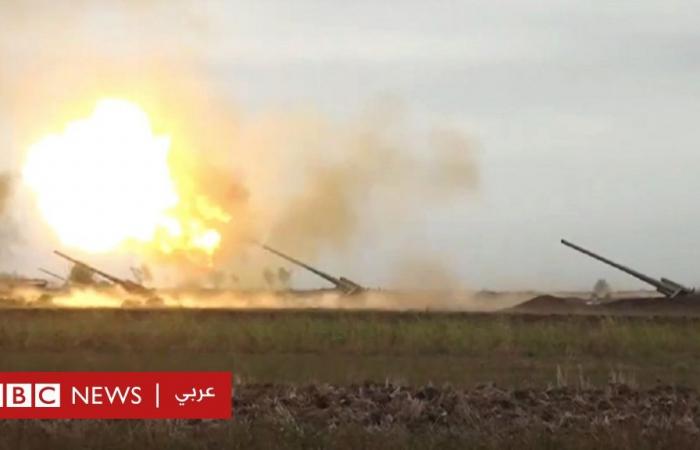 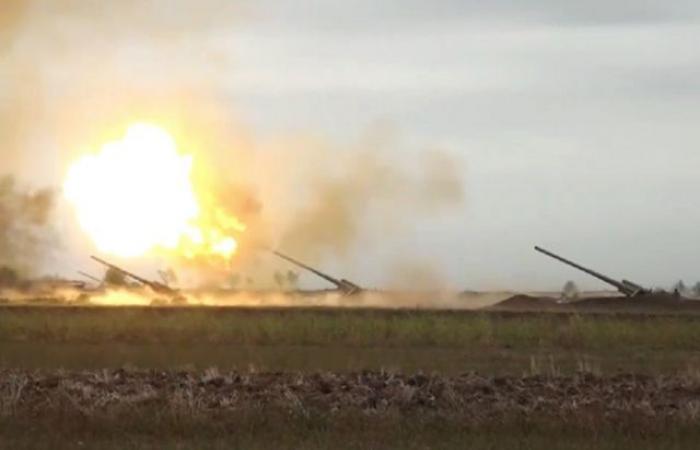 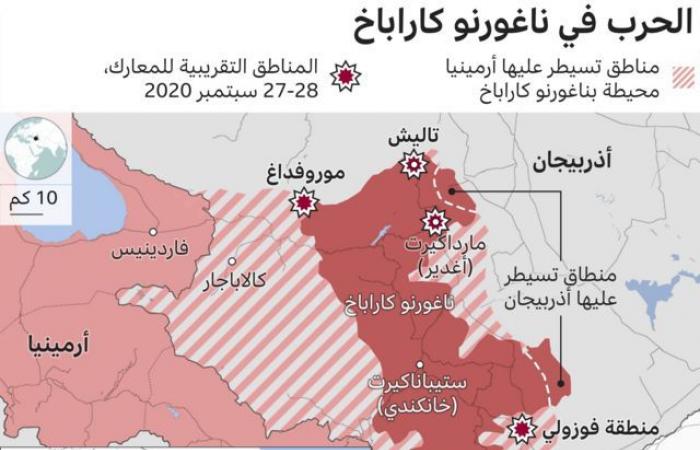 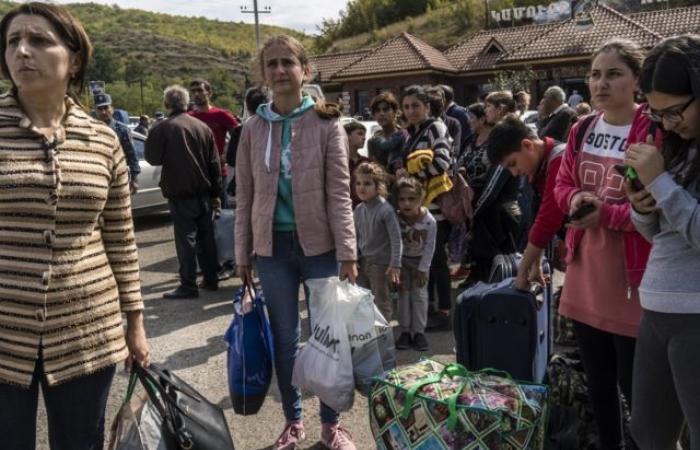 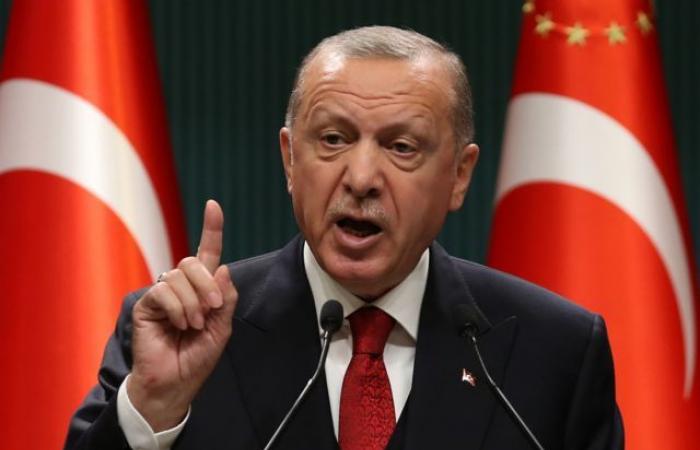 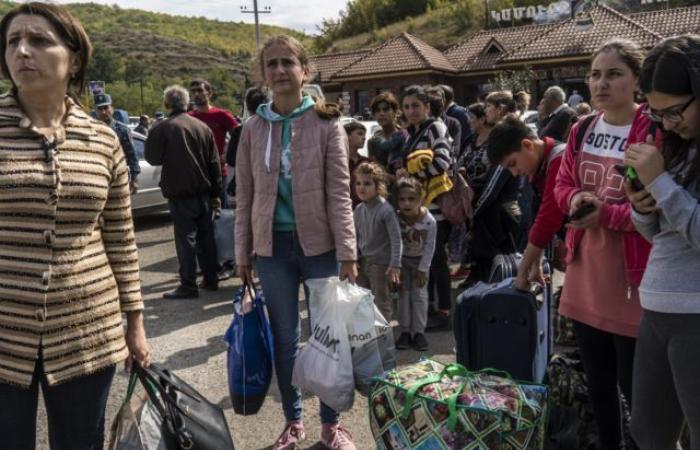 Amidst the intensification of the fighting over the Nagorno Karabakh region, reports are continuing regarding Turkey sending Syrian fighters to support Azerbaijan, which was denied by the authorities there, and the Turkish Ministry of Defense denied it despite the announcement by President Recep Tayyip Erdogan that his country stood by Azerbaijan with all its capabilities and demanded that Armenia end its “occupation.” For the area.

The Guardian newspaper and Reuters news agency reported reports about sending Syrian fighters backed by Turkey to Azerbaijan, and that a first batch of 500 Syrian fighters had already arrived there, according to what was reported by several sources within the so-called Syrian National Army (the main umbrella of the Turkish-backed Syrian armed groups) As well as the Syrian Observatory for Human Rights.

The Guardian stated that it spoke to three people living in the last stronghold of the armed opposition in Syria, and they confirmed that nearly a decade of war and extreme poverty led them to register their names with the leaders of the militants and mediators who promised them to employ them in a private Turkish security company abroad.

They said they expected to proceed to Turkey before being transferred to Azerbaijan.

The Guardian also says that the arrival of foreign fighters would further complicate the conflict over the Nagorno-Karabakh region, which is internationally recognized as part of Azerbaijan while Armenians have controlled it since it declared secession from Baku after the collapse of the former Soviet Union.

The Guardian also quoted the two brothers Muhammad and Mahmoud – who asked to change their names due to the sensitivity of the matter – who live in pride, that they were transferred to a camp in Afrin on September 13, and that an armed commander in the Turkish-backed “Sultan Murad Division” told them that there were opportunities to work in observation points. For oil and gas installations in Azerbaijan, contracts for three or six months, in exchange for a monthly salary of between 700 and 1000 dollars, which is much more than what they would get inside Syria.

The commander did not provide details about the nature of their work or the timing of their departure from the country, and the two men also do not know the name of the Turkish security company or the party that will pay them the salary.

“The commander told us that we will not fight, but we will help guard some areas. Our salaries are not enough, so I think it is a good opportunity to earn money,” says Muhammad.

His brother adds, “There are no job opportunities. I used to work as a seamstress in Aleppo, and since we were displaced to Azaz (after government forces regained control of Aleppo in 2016) I tried to work with several letters, but my family and I did not get enough to meet our needs.”

The Guardian notes that the salaries that were promised to receive them are much higher than what the Syrian fighters get from Ankara, ranging from 450 to 550 Syrian pounds per month.

As for Omar from Idlib – who also requested anonymity – he told the Guardian that he was summoned to Afrin on the twenty-second of September with 150 men, and asked them to prepare to leave, before they were informed later in the day that their travel was postponed for an indefinite period.

He said that he had registered his name with a local broker after learning of news of a possible spread abroad, provided that the broker would get two hundred dollars of his first salary.

“At first we received job opportunities in Libya, and people were afraid to go there, but now for sure, thousands among us are ready to go to Libya or Azerbaijan. We have nothing here.”

The Guardian says that some of the men sent to Libya were also told that they would work as a guard, but instead found themselves caught up in the fighting in the front lines. Many of them reported that their commanders received 20% of their salaries.

In this context, Elizabeth Tsurkov, a fellow at the Center for International Policy in Washington, told the Guardian newspaper: “The international community considers the lives of Syrians to be disposable, with Syria being an arena for achieving geostrategic goals and increasing the gains of countries that interfere in its affairs at the expense of the Syrians.”

“The Syrians have resisted and are still resisting this logic, but the economic devastation caused by the war and the recent collapse in the value of the local currency means that most Syrians are struggling to feed themselves. With limited options, many are now willing to sell themselves to those who pay the most.”

Several sources within the so-called Syrian National Army as well as the Syrian Observatory for Human Rights stated that a first batch of 500 Syrian fighters from the Sultan Murad and Hamza divisions had already arrived in Azerbaijan, including two prominent leaders, Fahim Issa and Saif Abu Bakr, while the Ghadryans were unable to verify the authenticity. These reports are from independent sources.

Reuters news agency also reports that two fighters belonging to Turkish-backed opposition groups in the areas of northern Syria under Turkish control are on their way to Azerbaijan in coordination with Ankara. They added that the leaders of the Syrian battalions told them that they would receive about $ 1,500 a month for that.

While Reuters was not able to independently verify the authenticity of their account, the two fighters refused to publish their names due to the sensitivity of the matter as well.

Reuters quoted a fighter who fought in Syria for the Turkish-backed Ahrar al-Sham group as saying, “I did not want to go, but I have no money. Life is very difficult and poverty is very extreme.”

He said that he arranged his mission with an official from the Turkish-backed Syrian National Army in Afrin, while the other fighter, who is from the Elite Army faction of the Syrian National Army, confirmed that he was informed that it was decided to deploy nearly 1,000 Syrians in Azerbaijan. Other opposition figures, who declined to be named, spoke of numbers ranging from 700 to 1,000

The two men, who spoke to Reuters last week, said they expected to be sent to guard facilities, but not to fight.

On Monday, the Armenian ambassador in Moscow said that Turkey had sent about 4,000 fighters from northern Syria to Azerbaijan while they were fighting there, which was denied by an aide to Ilham Aliyev, President of Azerbaijan.

Armenia also said that Turkish military experts were fighting alongside Azerbaijan in Nagorno Karabakh, and that Ankara had provided drones and warplanes.

On the other hand, Azerbaijan denied the validity of these reports, as Hikmat Hajiyev, assistant to the President of Azerbaijan for foreign policy affairs, said that saying that Syrian fighters are coming to help his country is “complete nonsense,” adding, “Our armed forces have enough personnel and reserve forces.”

Turkey enjoys close cultural and economic relations with Azerbaijan, as for Russia, it has always been close to Armenia, but in recent years it has documented its ties with Azerbaijan, and Moscow continues to sell arms to the two parties. While the West fears an escalation of the conflict in this region, as it is a main passage for gas and oil supplies.

During the past years, Turkey sought to extend its influence abroad with incursions into neighboring Syria and Iraq, and military support provided to the internationally recognized government in Libya. And sending opposition fighters in Syria to Azerbaijan – if these reports are correct – would create a third stage for the competition between Ankara and Moscow, according to Reuters.

These were the details of the news Nagorno Karabakh: Are there Syrian mercenaries fighting for Azerbaijan? for this day. We hope that we have succeeded by giving you the full details and information. To follow all our news, you can subscribe to the alerts system or to one of our different systems to provide you with all that is new.