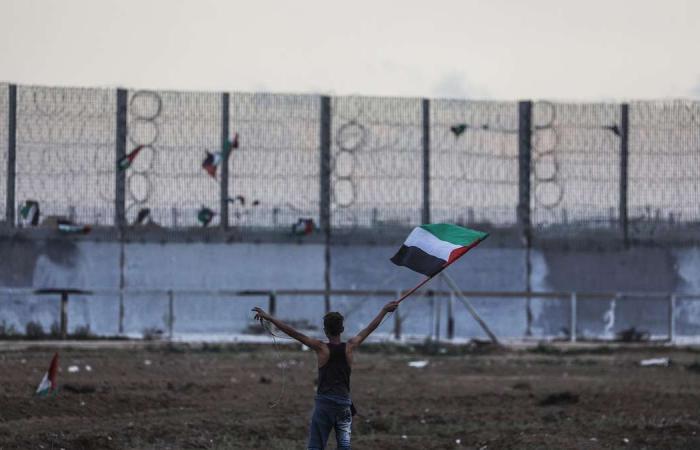 Hind Al Soulia - Riyadh - Thousands of Palestinians demonstrated along the Gaza-Israel frontier on Friday as the territory's Hamas rulers resumed the regular protests after a three-week pause.

The renewed weekly protests came as leaders from Hamas and the smaller but more radical Islamic Jihad were in Cairo, talking with Egyptian mediators about cementing a cease-fire with Israel that is expected to ease Gaza's 12-year-old blockade.

Organizers of the marches kept them restrained Friday, with no burning tires or firebombs, and with only a few protesters approaching the fortified perimeter fence and hurling stones at Israeli troops with slingshots.

The health ministry said 14 Palestinians were wounded by Israeli fire, four of them with live gunshots.

The militant Hamas group had put the weekly marches on hold since mid-November following a short round of cross-border fighting with Israel.

The fighting, the worst in months, was sparked by an Israeli targeted killing of a senior Islamic Jihad commander. Over the past decade, Israel and Hamas have fought three wars and dozens of shorter skirmishes.

Hazem Qassem, a Hamas spokesman, said his movement is determined to break the blockade and that the talks in Cairo, which also include bilateral discussions with the Islamic Jihad, were for this purpose.

"We won't allow this situation to last and we will continue the protests until the siege is broken," he said in a statement.

Unconfirmed reports say Egypt has proposed a five-year truce that will see economic incentives to Gaza to sustain calm.

In the West Bank, meanwhile, Israeli forces shot a 22-year-old Palestinian near the city of Hebron. The health ministry said the man was in serious condition after a live bullet hit him in the chest.

On Thursday, Palestinian officials expressed "great concern" over a report by the International Criminal Court's chief prosecutor that includes a warning that Palestinian stipends to attackers and their families could constitute a war crime.

Thursday's report, released in the Hague, highlighted possible crimes by both Israel and the Palestinians that are under investigation, including Israel's use of sometimes deadly force against protesters along the Israel-Gaza border fence, and Palestinian militant rocket fire and use of human shields in Gaza.

At the Palestinians' request, ICC prosecutor Fatou Bensouda opened a preliminary investigation in 2015 into alleged violations of international law following the 2014 war between Israel and Palestinian militants in the Gaza Strip.

Thursday's report said the prosecutor "believes that it is time to take the necessary steps to bring the preliminary examination to a conclusion."

These were the details of the news Protests at Gaza-Israel fence resume after three-week pause for this day. We hope that we have succeeded by giving you the full details and information. To follow all our news, you can subscribe to the alerts system or to one of our different systems to provide you with all that is new.