Syrian Foreign Minister: The “Turkish regime” has become rogue and out... 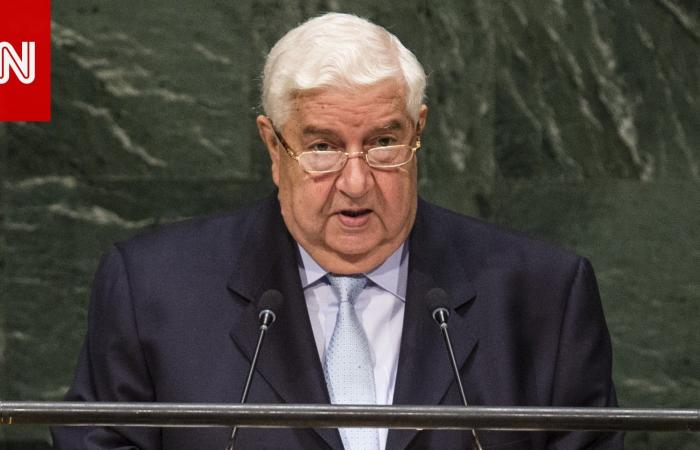 Dubai, United Arab Emirates (CNN) – Syrian Foreign Minister Walid al-Muallem attacked what he described as the “Turkish regime”, accusing Ankara of sponsoring terrorism in Syria and the region in general, during his speech on Saturday before the United Nations General Assembly.

Al-Muallem said in his speech: “Of course when we talk about supporting and investing terrorism, the current Turkish regime imposes itself strongly as one of the main sponsors of terrorists in Syria and the region .. This system has facilitated the entry of tens of thousands of foreign terrorists into Syria and continues to provide all forms of support to Jabhat al-Nusra. “And its sisters are among the terrorist organizations that have shredded the blood of the Syrians and are practicing a policy of Turkishization and forced displacement in the lands it occupies in Syria,” as he put it.

The Syrian Foreign Minister accused Ankara of practicing “collective punishment” against the people of the governor of Hasaka, who rejected what he described as the “Turkish occupation”, by cutting off water from them, describing it as a “war crime.”

Al-Muallem pointed out that Ankara did not abide by the outcomes of the Astana meeting and the Sochi understandings about Idlib, and touched upon Turkey’s transfer of Syrian fighters to Libya and “an assault on Iraq’s sovereignty and trading in the suffering of refugees to blackmail European countries and attempt to rob energy resources in the Mediterranean,” as he put it.

The Syrian Foreign Minister said: “The current Turkish regime has become a rogue regime that is outside international legitimacy … and its policies and actions that pose a threat to security and stability in the region as a whole must be put to rest,” as he put it.

Al-Muallem added, “The continued illegal presence of American and Turkish forces on Syrian territory is an occupation with all the legal dimensions that this entails,” as he put it.

In a related context, the Syrian Foreign Minister affirmed that his government stands with Iran in the face of American policies, and said about this: “My country reaffirms its support for the position of the Islamic Republic of Iran in the face of the US policy aimed at undermining the nuclear agreement and destabilizing the region, and confirms that this policy only shows the extent of The US administration’s disdain for international law and its failure to respect its obligations under international agreements, “he said.

These were the details of the news Syrian Foreign Minister: The “Turkish regime” has become rogue and out... for this day. We hope that we have succeeded by giving you the full details and information. To follow all our news, you can subscribe to the alerts system or to one of our different systems to provide you with all that is new.