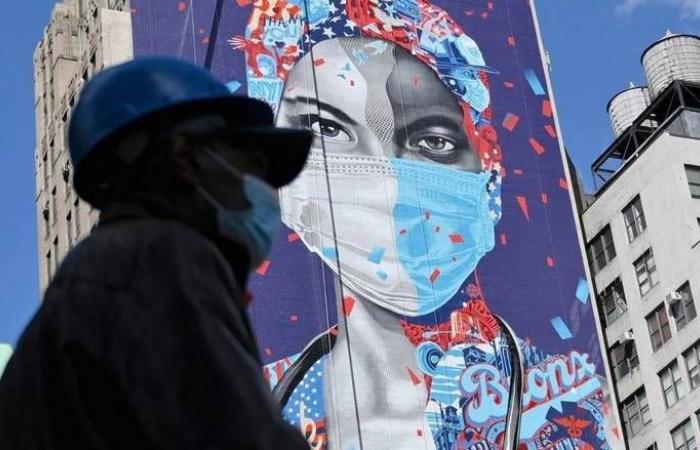 Thank you for reading the news about Coronavirus: Do masks help boost Covid-19 immunity? and now with the details

Aden - Yasmine El Tohamy - Researchers are launching several studies to try and test the theory while we wait for a vaccine.

Could the mask - already seen by many scientists as the most effective shield against Covid-19 - have yet another benefit? Some researchers now believe that they expose wearers to smaller, less harmful doses of the disease which spark an immune response.

This as yet unproven theory suggests that masks could help inoculate people while we wait for a vaccine.

Non-medical fabric or disposable masks have been recommended across the world, mainly as a way to help stop infected people from spreading the new coronavirus.

While they do not offer full protection, masks may potentially reduce the amount of virus inhaled by a wearer, according to a recent paper published this month in the prestigious New England Journal of Medicine (NEJM).

"We hypothesise that the higher a dose (or inoculum) of virus you get into your body, the more sick you get," one of the authors Monica Gandhi, a specialist in infectious diseases at the University of California San Francisco, told AFP.

"We think that masks reduce that dose of virus that you inhale and, thereby, drive up rates of asymptomatic infection."

Gandhi, director of the UCSF-Gladstone Center for AIDS Research, said that asymptomatic infection was linked to a strong immune response from T lymphocytes -- a type of white blood cell -- that may act against Covid-19.

"We think masks can act as a sort of 'bridge' to a vaccine by giving us some immunity", she said, adding that researchers were launching several studies to try and test the theory.

These would include looking at whether the requirement of a mask in certain cities had reduced the severity of the disease there.

They are also looking at antibody studies in Taiwan, where masks are ubiquitous but there are very few restrictions.

"Of course, it's still a theory, but there are many arguments in its favour," Bruno Hoen, director of medical research at the Institut Pasteur in Paris, told AFP.

He said we should "take a different look at the use of masks", which were initially deemed unnecessary by health authorities, against the backdrop of shortages.

Today, they are widely recommended to slow the spread of infection.

The theory echoes "variolation", a rudimentary technique used before the appearance of vaccines that involved giving people a mild illness to try to inoculate them against more serious forms of a disease.

In Asia, early variolation often meant blowing dried scabs from smallpox patients up the noses of healthy people, according to the US National Library of Medicine.

When it reached Europe and America in the 18th century, the practice -- which sometimes killed the patient -- commonly involved inserting smallpox under the skin.

The NEJM article suggests a parallel in the idea that being exposed to small doses of virus boosts immunity.

"It is an interesting theory with a reasonable hypothesis," Archie Clements, Vice-Chancellor Faculty of Health Sciences at Australia's Curtin University, told AFP.

But others expressed reservations.

Angela Rasmussen, a virologist at Columbia University in New York, said she was "pretty sceptical of this being a good idea".

She noted that we do not yet know if a lower dose of virus does mean a milder illness.

We do not know if masks reduce exposure to the virus, she said on Twitter, adding that the duration and level of immunity are also still poorly understood.

"This is an interesting idea, but there are too many unknowns to say that masks should be used as a tool for 'variolating' people against SARS-CoV-2," she added.

A key stumbling block to answering these questions is that testing the UCSF researchers' hypothesis is difficult.

"It is true that such a hypothesis in humans using gold standard methods (of experimental design) can never be proven given that we cannot expose humans deliberately to the virus," Gandhi said.

But some studies have proved useful, she said, including research conducted in Hong Kong on hamsters.

Scientists simulated mask-wearing by placing one between the cages of infected rodents and healthy ones.

They found that hamsters were less likely to catch Covid-19 if they were "masked", and even if they did catch it, their symptoms were milder.

There have also been a few accidental real-world experiments.

In one case, a cruise ship that departed from Argentina in mid-March issued everyone on board with surgical masks after the first sign of an infection.

Researchers found that 81 per cent of those who caught the virus were asymptomatic, which Gandhi said compared to around 40 per cent on other vessels where masks were not worn systematically.

These were the details of the news Coronavirus: Do masks help boost Covid-19 immunity? for this day. We hope that we have succeeded by giving you the full details and information. To follow all our news, you can subscribe to the alerts system or to one of our different systems to provide you with all that is new.