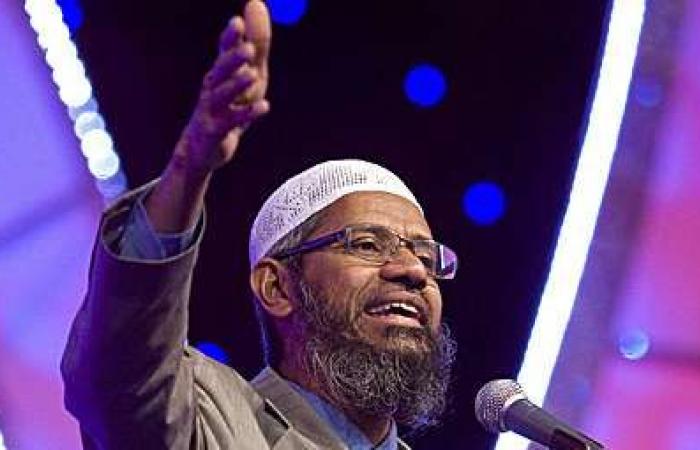 Thank you for your reading and interest in the news Firms behind Zakir Naik’s Peace TV file for liquidation avoiding £300,000 hate speech fines and now with details

Hind Al Soulia - Riyadh - The firms behind Zakir Naik’s Peace TV have both filed for liquidation.

Club TV and Lord Productions were fined £300,000 (Dh1.4 million) by the UK's media regulator Ofcom in May for airing hate speeches.

Now both have filed for liquidation with Companies House claiming they have no assets leaving the regulator £300,000 (Dh1.4 million) out of pocket.

Ofcom had found that four programmes on Peace TV and Peace TV Urdu breached broadcasting rules on incitement to commit crime, hate speech, abuse and offence after it aired diatribes that described people “worse than animals” and advocated the execution of magicians.

It ruled that the broadcasts were “very serious” and could encourage vulnerable viewers to commit killings.

Mr Naik ran both Peace TV and Peace TV Urdu and presented on both channels. Two of the complaints related to his broadcasts.

The TV personality, who is based in Malaysia, has been excluded from travel to the UK, India and Bangladesh and is accused by the Indian government of laundering £23m (Dh109.3m).

Britain barred him from entering the country in 2010, citing “unacceptable behaviour”, although officials have never spelled out the nature of the behaviour.

Club TV and Lord Productions Limited, which Mr Naik set up and was a director, are both owned by parent company Universal Broadcasting Corporation Limited which is still operating.

Both the satellite stations are bankrolled by UK registered charity the Islamic Research Foundation International, which was founded by Mr Naik who is also its chairman.

It is now under investigation by the UK's Charity Commission.

Last year, Ofcom threatened to strip both the television stations, which claimed to reach two million viewers, of their licences but both voluntarily surrendered them last November.

“In this case, the potential for very serious harm if this material incited others was clear, “ Ofcom had said.

“Ofcom was concerned that the statements made by the scholar had the clear potential to influence impressionable viewers by encouraging serious crime, up to and including murder, and/or leading to disorder in relation to members of the public, in particular to Muslim people practicing magic as part of their faith.

“We also found that the scholar’s religious standing gave his statements greater weight and authority with the viewer, which compounded the seriousness of the breach. Ofcom considers the potential harm arising from such hate speech to be very serious.”

The Commission’s inquiry is focusing on why the charity has continued to fund Peace TV channels following repeated broadcasting breaches due to hate speeches and hosting radicals and extremist speakers in the past four years.

Mr Naik was barred from the UK in 2010 but continued to operate the channels until last year.

“In reaching its decision on the imposition of a sanction in this case, Ofcom has taken full account of the need to ensure that any penalty acts as a deterrent, including to other broadcasters,” it added.

“In this case Ofcom believed that a financial penalty was necessary to reflect the serious nature of the Code breaches and to act as an effective incentive to comply with the Code, for other licensees.”

These were the details of the news Firms behind Zakir Naik’s Peace TV file for liquidation avoiding £300,000 hate speech fines for this day. We hope that we have succeeded by giving you the full details and information. To follow all our news, you can subscribe to the alerts system or to one of our different systems to provide you with all that is new.

PREV The Antarctic fossil could have been the largest flying bird of...
NEXT Europe’s astronaut ink NASA deal – EURACTIV.com