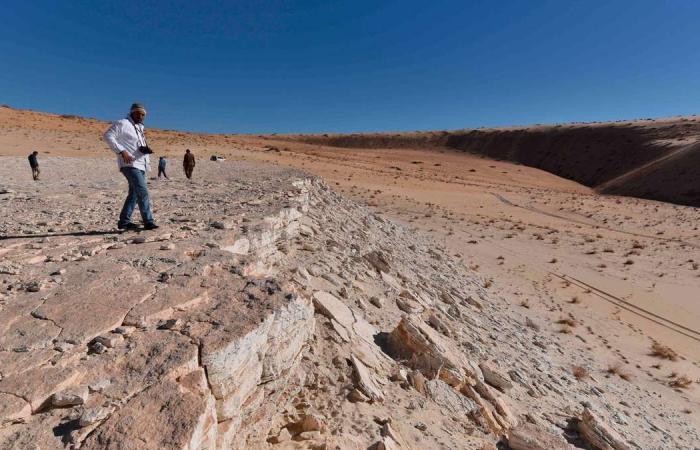 Thank you for your reading and interest in the news 120,000-year-old footprints discovered in Saudi Arabia reveal how the first people lived and now with details

Hind Al Soulia - Riyadh - Frozen in time for around 120,000 years, fossilised footprints in Saudi Arabia have pushed back the date when humans are first believed to have migrated from Africa.

The prints, which also include elephants, camels and horses, were discovered on the floor of an ancient dry lake bed in the Nafud Desert, a remote area in the heart of the Kingdom.

They are the earliest dated evidence for humans on the Arabian Peninsula, and pushes back migration dates from Africa through the region by tens of thousands of years.

Their discovery also provides important clues to major climate changes in the region over millennia.

I'm sure more finds will come out from across Arabia and Africa. And that will add and build the jigsaw puzzle as to what our species’ evolutionary history looked like

The land these early humans found was not the arid, waterless desert of today, but stretches of green savannah with fresh water lakes, and crossed by flowing rivers.

Researchers think that these conditions made what is now Saudi Arabia so attractive for both people and animals as they moved north to Europe and Asia.

The investigating team quickly found footprints of elephants “because they’re pretty big, they’re obvious” said Richard Clark-Wilson, a lead author from the Royal Holloway, University of London, which worked with the Max Planck Institutes in Germany along with Saudi Arabian archaeologists and other partners in what is known as the Green Arabia project.

Further searching discovered what seemed to be a human print, confirmed by analysis that included 3D modelling and high resolution photographs.

Dating the footprints involved calculating the erosion of the former lake bed over time and “luminescence dating”, which measures radiation in buried grains of sand and works out when they were last exposed to direct sunlight.

“Prehistoric humans would be attracted to resources in the landscape,” said Mr Clark-Wilson. “So freshwater they could drink, and they would also be attracted to their prey. And they're likely to follow the movements of their prey, and also the water resources.”

Changes in the prehistoric environment saw areas like the Arabian Peninsula become wetter and greener, while existing areas to the south became drier and most hostile.

Both animals and humans moved north in search of food and water, a pathway that led naturally out of Africa and into Europe and Asia.

It has long been accepted that mass migration of humans from Africa took place around 60,000 years ago, but recent discoveries have found some populations may have left much earlier.

Two years ago, Israeli archaeologists revealed that a fragment of jawbone dated back around 180,000 years, making it the oldest human remains discovered outside Africa.

The latest Saudi discovery is further confirmation that homo sapiens moved to what is now the Middle East much earlier than once thought.

The dating of the Saudi footprints have a margin of error of around plus or minus 10,000 years and it is impossible to tell if they were made by men or women.

Because they were laid down in less than a few hours, they provide a unique snapshot in time.

"We know people visited the lake, but the lack of stone tools or evidence of the use of animal carcasses suggests that their visit to the lake was only brief,” said Mathew Stewart of the Max Planck Institutes for Chemical Ecology, and co-author of the study.

“As to where they were going, it's really hard to tell it's hard to tell whether they managed to expand further on,” says Mr Clark-Wilson.

“They may have expanded across the Arabian interior further into Asia or they may have gone extinct.”

It is unlikely, he thinks that modern day humans are descended from these early ancestors, but rather from the later migrations.

The new discoveries, however, underline the importance of the Arabian Peninsula for the study of human prehistory, something which is now only being properly understood and studied.

“It's a really important region. It lies adjacent to Africa, and is the only land bridge between Africa and Asia,” said Mr Clark-Wilson.

“I'm sure more finds will come out from across Arabia and Africa. And that will add and build the jigsaw puzzle as to what our species’ evolutionary history looked like.”

These were the details of the news 120,000-year-old footprints discovered in Saudi Arabia reveal how the first people lived for this day. We hope that we have succeeded by giving you the full details and information. To follow all our news, you can subscribe to the alerts system or to one of our different systems to provide you with all that is new.

PREV FBI pinpoints suspect in probe of US Capitol policeman’s death, reports NYT
NEXT UK vaccinates over 20 million people with at least one dose