Banksy suffers 'devastating' defeat in battle over most famous artwork 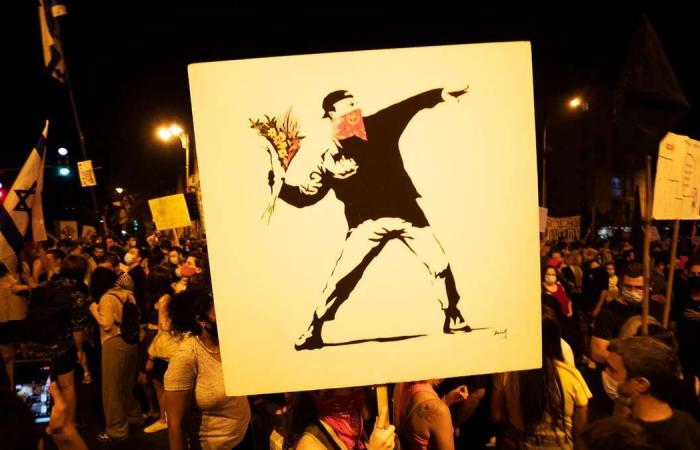 Hind Al Soulia - Riyadh - A Palestinian boy walks past a Banksy mural of children using an Israeli army watch tower as a swing ride in Beit Hanoun, Gaza, as seen on April 10, 2015. EPA

'The Flower Thrower', arguably one of the most famous works by Banksy, depicts a masked Palestinian man throwing a bouquet of flowers, seen in Bethlehem on December 12, 2018. EPA

Palestinians ride a motorcycle past words thought to be painted by British street artist Banksy on the wall of destroyed homes in Beit Hanoun town in northern Gaza. Pictured on April 10, 2015. EPA

A work by Banksy, seen in Bethlehem in December 2007. The stencilled work has been interpreted to depict a small girl in a dress, thought to be Palestinian, frisking an Israeli soldier. EPA

An armed Palestinian policeman stands before 'The Armoured Dove', a graffiti painting by Banksy depicting a peace dove wearing a flak jacket with crosshairs on the bird's chest, painted on a wall at the entrance to the West Bank city of Bethlehem, as photographed on January 6, 2019. EPA

Banksy opened The Walled Off Hotel in Bethlehem in 2017. EPA

A view through a window inside The Walled Off Hotel. EPA

A room at The Walled Off Hotel in Bethlehem with a work by Bansky, depicting an Israeli soldier and a Palestinian protester during a pillow fight. EPA

A graffiti mural of a kitten by Banksy, on the wall of the Al Shimbari family's home, which was damaged during the 2014 conflict between Israel and Hamas, in Beit Hanoun in northern Gaza. Seen on February 27, 2015. EPA

'Scar of Bethlehem' is a modified nativity set that Banksy created for the Walled Off Hotel in Bethlehem in December 2019 . EPA

A work by Banksy, depicting a camel with human figures climbing up and down its legs. Seen on December 4, 2007. EPA

A stencilled work by Banksy, showing an Israeli soldier asking a donkey for its identity card, seen on December 4, 2006. EPA

A mural by Banksy in Beit Hanoun, as seen in February 2015, depicts a bent figure wearing a head scarf, painted on the door of a home destroyed by the Israeli military in 2014. EPA

Banksy street art on the entrance to the Aida refugee camp in Bethlehem, as seen on April 18, 2019. EPA

This stencil of a tank being towed away on the wall of a house on a main street in Bethlehem is credited to Banksy, but not signed, as seen December 4, 2007. EPA

These were the details of the news Banksy suffers 'devastating' defeat in battle over most famous artwork for this day. We hope that we have succeeded by giving you the full details and information. To follow all our news, you can subscribe to the alerts system or to one of our different systems to provide you with all that is new.