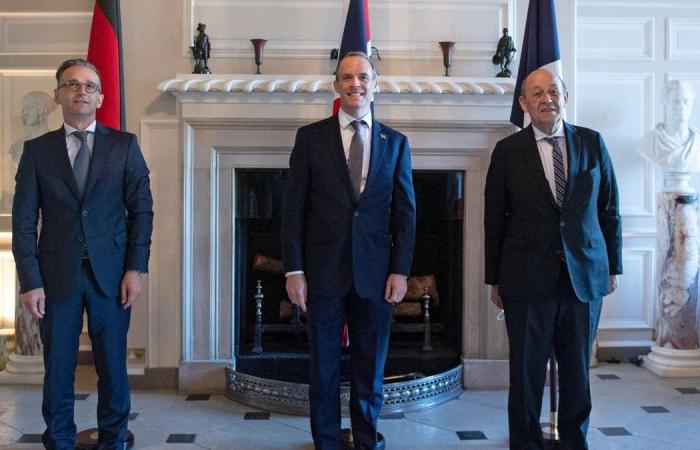 Hind Al Soulia - Riyadh - The British foreign secretary has demanded Iran complies with its nuclear deal but has avoided a commitment to reimpose UN arms sanctions against Tehran, it emerged today.

After meeting with his German and French counterparts to discuss whether the three European ‘E3’ countries would vote with the US for the sanctions next month, Dominic Raab failed to make a full statement on Britain’s position.

The UK has been under intense pressure from America to support President Donald Trump’s demand for a “snapback” on all UN sanction against Iran.

But it appears after the meeting in Britain the E3 are against a move that could jeopardise the Joint Comprehensive Plan of Action (JCPOA) nuclear deal and have agreed to hold out against US demands.

Unusually the Foreign Office failed to issue a formal statement following the meeting. Instead officials highlighted Mr Raab’s tweet which stated: “Iran must never develop a nuclear weapon. It must comply with its nuclear commitments & preserve the JCPoA – that was the conclusion of the E3 when I met with @HeikoMaas & @JY_LeDrian today. We are committed to holding Iran to account”.

In his tweet, Jean-Yves Le Drian, the French foreign secretary, merely stated that he “traveled to the UK for a meeting on the Iranian dossier” and his German counterpart did even mention it on Twitter, despite Mr Raab’s hashtag.

Britain’s silence on the issue is likely to infuriate President Donald Trump and could jeopardise talks for a free trade deal with America post Brexit.

America has pressured Britain into backing sanctions after its UN ambassador suggested last month that failing to do so would allow the “world’s largest state sponsor of terrorism to buy and sell weapons”.

Mike Pompeo, the US secretary of state, has requested the UN Security Council trigger a “snapback” mechanism contained in the JCPOA accord to seek the re-imposition of sanctions lifted in 2015. It cites Tehran’s breach of the deal by its continued attempt to enrich uranium.

But America withdrew from the JCPOA two years ago which the European say make its “snapback” attempt invalid.

Since then the US has been isolated on the UN security council in its efforts to prevent Iran being allowed to rearm.

The arms ban is set to lift automatically in October in line with the five year timetable set out by the nuclear deal in 2015.

Germany and France have cooperated with Britain over Iran despite the legal issues of the UK reneging on an international deal over Brexit.

These were the details of the news European powers resist US pressure but demand Iran meets nuclear commitments for this day. We hope that we have succeeded by giving you the full details and information. To follow all our news, you can subscribe to the alerts system or to one of our different systems to provide you with all that is new.