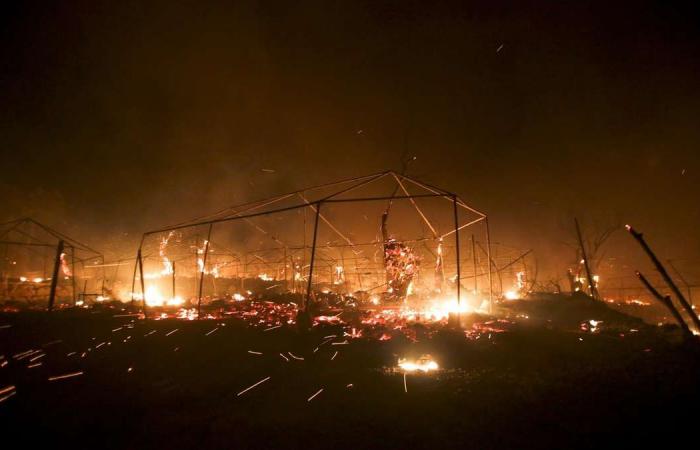 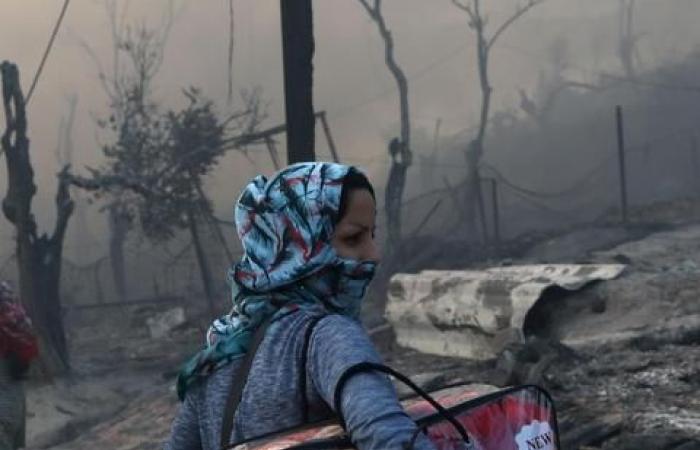 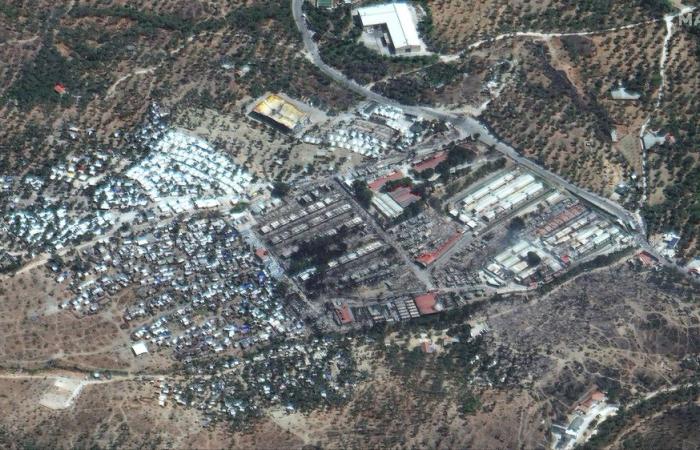 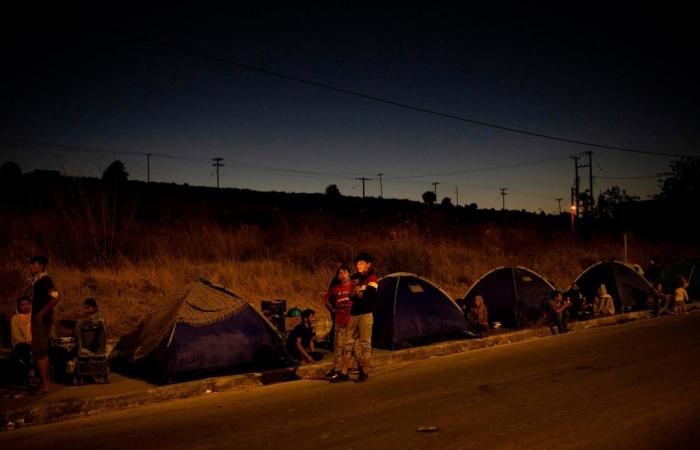 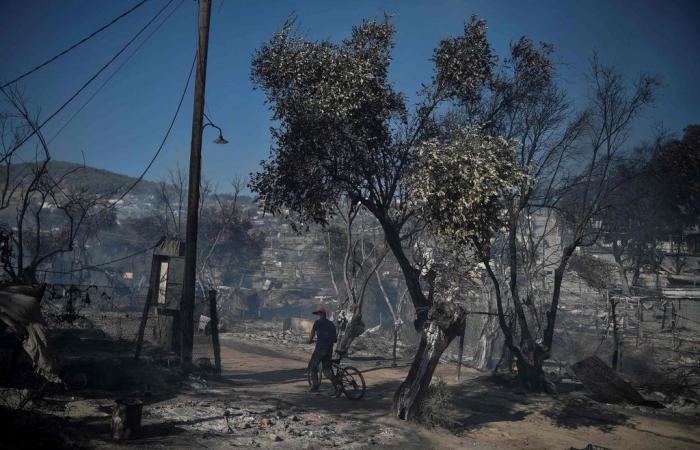 Thank you for your reading and interest in the news 'My daughter’s eyes nearly popped out'. Moria turns into living hell and now with details

Hind Al Soulia - Riyadh - When he fled Syria in 2018 to avoid the military draft, Mahmoud Jassem, 32, never expected to be twice made a refugee within Europe’s borders.

Sitting with his wife and two daughters on a simmering piece of asphalt, a kilometre from the still-smouldering camp of Moria on Lesbos, Mr Jassem describes how a teargas barrage by the Greek police followed the initial shock of realising on Sunday night that his family’s tent would soon be on fire.

“My daughter’s eyes nearly popped out and she kept on screaming till we could get her away from the fire and the teargas,” Mr Jassem said in his thick Deir Ezzor accent.

“We were expecting that NGOs might come and support us on the day after the fire, but that didn’t happen either.”

Not only are the nearly 13,000 residents of Europe’s largest and most disreputable refugee camp receiving scant Greek government support, but a political battle has broken out. 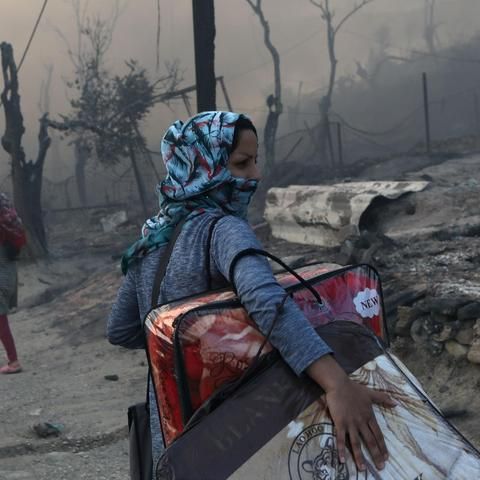 The centre-right government and a large number of islanders sick of being stuck between the whims of Turkish President Tayyip Erdogan and an EU policy of advertised humanitarianism. The islanders and their unwanted refugee guests are caught in the middle on an island that has become Europe’s Nauru and Manus.

Without the NGOs, this will be a total disaster

“The Greeks are relying on the NGOs to provide a lot of the services that the government cannot since they’ve never done it and they’ll never do it,” said Tommy Olsen, the founder of the Aegean Boat Report, an organisation that tracks boat arrivals and pushbacks on the Aegean Sea between Turkey and Greece.

“Without the NGOs, this will be a total disaster.”

Two days after it burned down, Moira keeps on bursting back into flames.

After the large fire that largely destroyed the whole camp on Sunday night, it erupted again, first on Tuesday night and then again on Thursday afternoon, belching fresh plumes of smoke from inside the camp. It seemed as if Moria’s arsonists – whoever they might be – were committed to making the camp uninhabitable.

Thousands of asylum-seekers, mostly from Afghanistan, Arab and African countries, dragged their possessions under the harsh sun through the streets, protesting that they had yet to be fed or even offered water. They claimed police were instructing businesses to ban them from entering the stores. Authorities began disbursing water and food on Thursday afternoon.

The refugees’ slow progress on the hot asphalt came to an end against lines of riot police, deployed a couple of kilometres from the smouldering camp.

Incapable of moving forward, they sought out the scant shade offered by trucks, riot-police vans, or pieces of cardboard erected against the glare, and sat in suffering patience.

The riot police vans and refugees on usually deserted roads and the shops in the town filled with mask-wearing locals painted a picture of a place suffering from both a pandemic and a collapse in law and order.

“Moria is finished,” said Eman, a 24-year-old Afghan gathered with other Afghan men by the first riot police block. “It will never function again as a camp.”

Inside the camp, a few refugees moved among the camp’s carbonised tents and pathways under Fire Service airplanes and a hovering helicopter. Among smoking olive tree stumps and melted metal containers, the only pattern on the scorched earth visible were the bases on which tents had once been pitched.

“Moria is not there in order to host but in order to send away," said Dimitris Tsirkas, an Athens-based journalist and commentator.

"To shout to those others who hope to pass into the European Eden: forget it, there is no paradise here for you, only hell. And if you managed to escape one hell, we have another, even worse one in store for you. Until you leave, or better still, never come in the first place."

Opposition to migrants in Greece has intensified

Five years after Europe opened, then closed, its gates to refugees, many of the locals no longer want to see people such as Yussef on their island, and are expressing their frustration in escalating shows of protest.

Unrest began last February when locals faced down riot police units dispatched from Athens in opposition to the creation of permanent camps on the island.

Greece’s right-wing government is pandering to its conservative voter base through a policy of reducing the numbers of asylum-seekers by speeding up asylum processes and rejections, and increasing pushbacks of boats at sea.

Now, in the aftermath of this embarrassing disaster, the government is rushing to house the refugees in military and civilian ships, and thousands of tents.

“So now you have a state of emergency for the next four months and they’re bringing in lots of riot police because they know that this won’t go quietly,” said Olsen, the Aegean Boat Report founder.

“The refugees won’t stay put and nor will the locals: already local vigilantes and fascist groups were going around town last night intimidatingly checking the IDs of volunteers.”

"At this moment we have two fronts,” said Notis Mitarakis, Greece’s Minister of Migration. “That of the migrants blackmailing to be allowed to leave [Mytilini], and unfortunately that of the local authorities and the lack of the necessary responsibility that should be shown during tough times."

Outside Moria, locals faced off on Thursday morning with army bulldozers seeking to start the process of rehabilitating the camp.

For kilometres on both sides of the camp, ragged families continuing lugging the few possessions they had managed to rescue from the fire, or sat by the roadside, as fresh plumes of smoke erupted from inside the camp. Looters had already stripped most tents and local shops of anything valuable.

“We don't know who it was who set fire to the camp, but they were quickly followed by thieves who stole our refrigerator, clothes and the stock of the shop we used to maintain here,” said Ali, a 19-year-old Afghan refugee from Pakistan, as he sorted through the remnants of his intact but looted tent. Ali spent four years working illegally in Iran before arriving in Greece.

In the absence of a functioning Moria camp, tensions on the island will remain high, until a more permanent solution is found.

Mr Jassem and his family sipped tea as they prepared to bed down for another night, alongside the safety of two other families. They left family members and friends as watchmen, both to protect themselves and to keep an eye out for fresh outbursts of fire.

These were the details of the news 'My daughter’s eyes nearly popped out'. Moria turns into living hell for this day. We hope that we have succeeded by giving you the full details and information. To follow all our news, you can subscribe to the alerts system or to one of our different systems to provide you with all that is new.