Banksy-funded rescue boat in crisis as it shelters 200 people 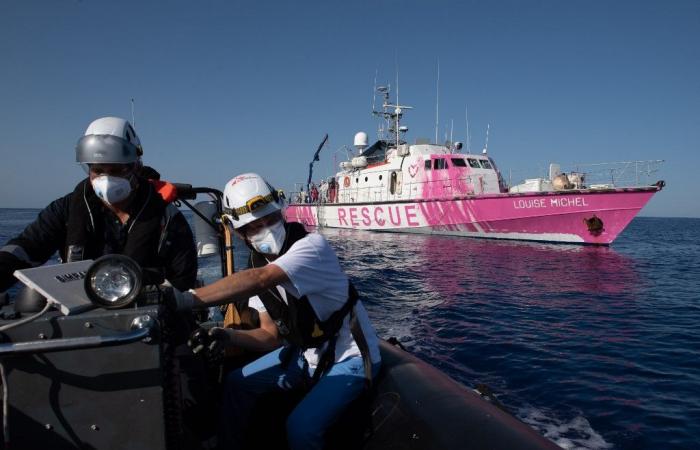 Jeddah - Yasmine El Tohamy - LONDON: The rescue boat funded by UK street artist Banksy is close to declaring a “state of emergency” as it safeguards over 200 people off Libya’s coast, while European authorities allegedly ignore their pleas for help.

On Thursday, the ship rescued 89 people, including 14 women and four children, in the central Mediterranean.

The ship then received a mayday call from an aircraft that monitors migrant boats in danger in the Mediterranean, which said it had located a dinghy that was not moving and was taking on water.

A ship spokesman said the “Louise Michel proceeded at full speed” in response to the call, and “handed out life vests to 130 people to secure the situation.”

The dinghy, located in the Maltese search and rescue zone, had a dead body on board and a number of injured passengers. It was dangerously overcrowded and taking on water.

The Louise Michel, with a maximum capacity of 120 people, is now safeguarding the 130 passengers on board the distressed dinghy, in addition to the 89 migrants already on board from its previous rescue operation.

Maltese and Italian authorities have been alerted to the dire conditions on the dinghy, but activists said neither have responded to the situation.

Activists on the Banksy-funded ship said the people had been left alone in a European search and rescue zone, and implored authorities to respond. “Don’t let it become a body count. Do your job. Rescue them,” they said.

Lea Reisner, head of operations for the Louise Michel, said European authorities are flaunting their duty toward migrants and refugees in the Mediterranean.

“They deny responsibility while we are trying to keep everyone alive … We need immediate assistance,” she added.

So far in 2020, more than 500 migrants and refugees are known to have died trying to make the perilous crossing from North Africa to Europe, though the real number of deaths is estimated to be far higher.

These were the details of the news Banksy-funded rescue boat in crisis as it shelters 200 people for this day. We hope that we have succeeded by giving you the full details and information. To follow all our news, you can subscribe to the alerts system or to one of our different systems to provide you with all that is new.