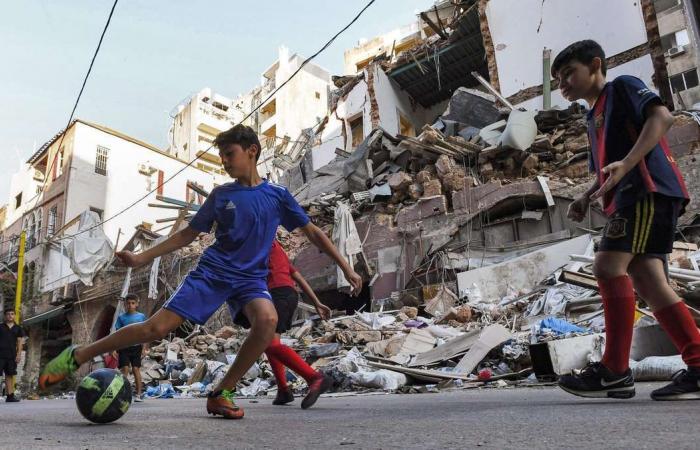 Thank you for your reading and interest in the news The Middle East Framed - regional photography for August 29, 2020 and now with details

Hind Al Soulia - Riyadh - An aerial view of Syrians gathering for a demonstration by the ruins of a building that was hit in prior bombardment and adorned with a giant flag of the Syrian opposition, in the town of Ariha in the rebel-held northwestern Idlib province. AFP

Palestinian volunteers distribute food to empoverished people in Rafah in the southern Gaza Strip during a lockdown in the Palestinian enclave due to increasing cases of the Covid-19 coronavirus infections. AFP

Palestinian members of staff pray in an almost empty mosque in the northern Gaza Strip. Reuters

Children play with a football past rubble and destruction along a street in the Gemmayzeh district of Lebanon's capital Beirut in the aftermath of the monster blast at the nearby post which devastated the city. AFP

An aerial view of children playing with a football past rubble and destruction along a street in the Gemmayzeh district of Lebanon's capital Beirut. AFP

A worker sprays disinfectant as worshippers gather near the Imam al-Abbas Shrine. AFP

Iranian Supreme Leader Ayatollah Ali Khamenei wearing a protective face mask as he listens to a reciting of the Quran and a speaker at the empty mosque in his residence compound during the holy month of Muharram, ahead of Ashura day, in Tehran, Iran. EPA

Cows graze on grass as a young farmer watches them, near a village in Yemen's Jabal Haraz mountainous region located between the capital Sanaa and the city of Hodeidah. AFP

Muslims wearing protective face masks are seen at Al-Azhar mosque for the first Friday prayers after reopening it as the government eased restrictions, in the old Islamic area of Cairo, Egypt. Reuters

Muslims maintain social distance as they pray inside the Al-Azhar mosque during the first Friday prayers after reopening, in the old area of Cairo, Egypt. Reuters

Three small rescue boats that are part of the Sea-Watch 4 civil sea rescue ship approching he pink rescue boat "Louise Michel" off the coast of Libya. British street artist Banksy is funding the Louise Michel, covered with his own artwork, to rescue migrants in the Mediterranean. AFP

These were the details of the news The Middle East Framed - regional photography for August 29, 2020 for this day. We hope that we have succeeded by giving you the full details and information. To follow all our news, you can subscribe to the alerts system or to one of our different systems to provide you with all that is new.