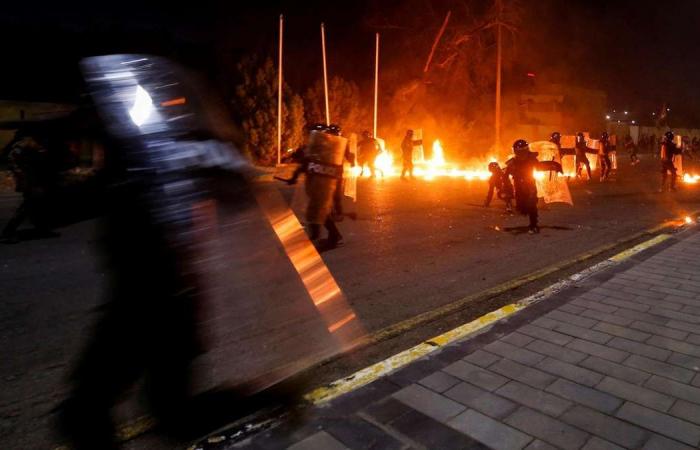 Hind Al Soulia - Riyadh - Iraqi Prime Minister Mustafa Al Kadhimi travelled to Basra on Saturday, soon after returning from his official visit to the US, following days of protests in the southern city over the killing of prominent activists

The prime minister was accompanied by a high-ranking security delegation that included the defence minister, and the heads of the national security agency and Counter-Terrorism Services, a government official told the Iraq news agency.

Anger over the assassinations of two activists boiled over on Friday as protesters torched parliament offices in Basra, following days of inaction by the government over the killings.

Demonstrators burnt the outer gate of the entrance to the building housing the Iraqi parliament's local offices for Basra province, the area that produces the lion’s share of Iraq’s oil.

It was the most significant incident against the government in Basra since mass anti-establishment demonstrations began in October, when tens of thousands took to the streets in Baghdad and across the south to decry government corruption. Protests also erupted in Basra in the summer of 2018.

Protesters have blamed Iran-backed Iraqi militias for attacks on activists.

Abbas Al Darraji, one of the most prominent protesters based in Basra, said demonstrators sought to increase the pressure on local officials.

“Yesterday, we poured into the parliament building in Basra to pressure Basra MPs to sign the dismissal of Basra's governor Asaad Al Eidani,” he said.

Many on the streets of the southern city blame local politicians for failing to take action to address their grievances over lack of jobs, poor public services, corruption and police brutality despite months of protests.

“We ask the Basra MPs to sign a paper to [enact the] resignation of Al Edani, they see injustice but have made no tangible measures to help the people for years,” said Mr Al Darraji.

Protesters gathered to demand the resignation of the Basra governor after two activists were gunned down and several others injured in attacks in the city in the past week.

Activist Reham Yacoub was killed in Basra on Wednesday by unidentified gunmen. She was a respected activist who had been active in the October demonstrations.

Days earlier, activist Tahseen Osama was killed by armed men. That killing prompted dozens of protesters to take to the street, and police responded by firing live rounds at them.

“Sooner or later, we must remove the governor from the political circle just like dismissing the Basra police chief who allowed the killing of protesters in the city,” Mr Al Darraji added.

But protesters said this was not enough, decrying inaction by the Iraqi government over the two killings. They carried banners calling for the activists’ killers to be held accountable.

“Al Eidani bears the greatest responsibility” for the deaths of the activists, said protester Ahmed Qassim, “because he is the head of the Supreme Security Committee and he is responsible for bringing any party involved in the assassinations to court”.

“Because he did not move a finger, he is complicit in the suppression of protesters by force,” Mr Qassim said.

Mr Al Darraji said he was sure that the people would not back down, despite the attacks.

“The people are the source of all power, we brought them to the government and we will kick them out the circle,” he said.

Angry protesters erected a sign on the Basra parliament building reading that it was closed by order of the people.

But Mr Al Darraji said that he, like many of the prominent figures in the protest movement, was scared after the recent attacks and planned to move somewhere safer.

Mr Al Kadhimi is on a visit to Washington for strategic talks expected to shape the future of US-Iraq relations, and the future of the US troop presence in the country. – Additional reporting by The Associated Press

These were the details of the news Iraq PM rushes to Basra after return from US for this day. We hope that we have succeeded by giving you the full details and information. To follow all our news, you can subscribe to the alerts system or to one of our different systems to provide you with all that is new.