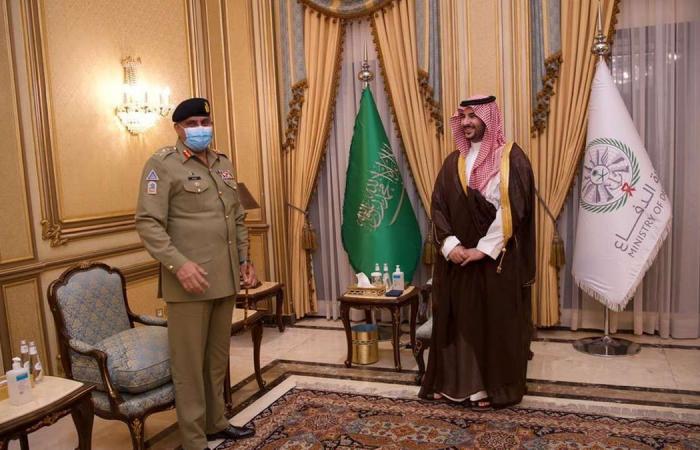 Hind Al Soulia - Riyadh - Pakistan's army chief arrived in Riyadh on Monday on a visit aimed at smoothing relations between the two countries over the disputed region of Kashmir.

Gen Qamar Javed Bajwa's visit is apparently aimed at easing a rift caused by the Pakistani foreign minister's demand for a firm Saudi Arabian response to what he called Indian atrocities in Kashmir.

"During their meeting, they discussed prospects of military co-operation and ways to support it as well as other areas of common interest," the ministry said in a brief statement.

In a sharply worded statement earlier this month, Pakistan's Foreign Minister Shah Mahmood Qureshi called on the Saudi-led Organisation of Islamic Co-operation to convene a high-level meeting on Kashmir.

"If you cannot convene it, then I'll be compelled to ask Prime Minister Imran Khan to call a meeting of Islamic countries that are ready to stand with us on the issue of Kashmir and support the oppressed Kashmiris," Mr Qureshi was quoted as saying by Pakistani media.

The comment raised eyebrows in Riyadh and was seen as a warning that Pakistan was preparing to call for a session of Islamic countries outside the OIC.

Attempts to organise parallel bodies to the 57-member pan-Islamic OIC have caused international rifts in recent years. Last year, Malaysia hosted a Muslim meeting shunned by Saudi Arabia and its allies. Analysts said the summit was aimed at rivalling the OIC, which is headquartered in the Saudi Arabian city of Jeddah.

Leaders of Iran, Turkey and Qatar attended the summit in Kuala Lumpur, while Pakistan's Mr Khan cancelled his attendance after Riyadh expressed concerns.

"If Foreign Minister Qureshi's veiled reference is towards another Kuala Lumpur-style gathering, then it is a dangerous proposition that could be least expected from a brotherly country," Ali Awadh Asseri, a former Saudi ambassador to Pakistan, wrote in Arab News, a pro-government Saudi Arabian daily.

"Will PM Imran Khan remind him to be careful in future, as any damage to our brotherly ties goes against our respective national interests and public aspirations?" Mr Asseri added in a column published on Monday.

Pakistan and India have clashed over Kashmir since independence from Britain in 1947, with both countries claiming the territory that has sparked two full-blown wars between the foes.

Saudi Arabia has supported Pakistan, a traditional ally, with billions of dollars in financial aid and loans in recent years.

But observers say the kingdom is also keen not to upset India, a key business partner and importer of crude oil.

These were the details of the news Pakistan's army chief in Saudi Arabia to reboot relations after Kashmir rift for this day. We hope that we have succeeded by giving you the full details and information. To follow all our news, you can subscribe to the alerts system or to one of our different systems to provide you with all that is new.