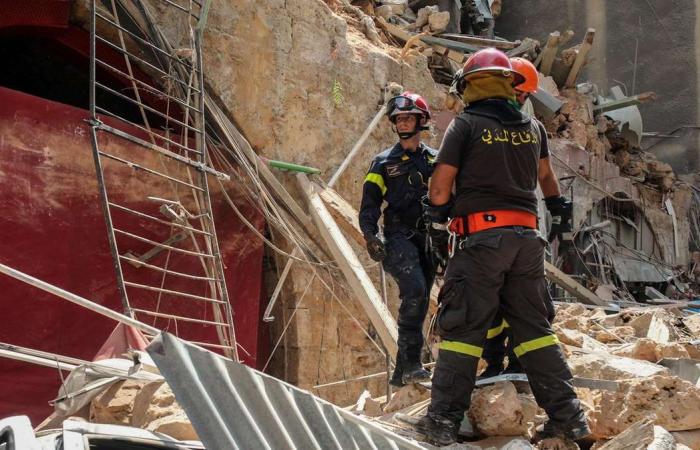 Thank you for your reading and interest in the news Beirut blast was like a small nuclear weapon, says explosives expert and now with details

Hind Al Soulia - Riyadh - The 2,700 tonnes of ammonium nitrate responsible for flattening much of Beirut on Tuesday detonated with the equivalent power of a small nuclear weapon, a leading explosives expert has told The National.

The blast - that of approximately 1.5 kilotons of TNT - was one-tenth of the explosive yield of the Hiroshima atomic bomb that was dropped on the Japanese city 75 years ago today, Professor Andrew Tyas said.

The explosion killed at least 137 people and caused up to $15 billion in damage to houses and infrastructure, leaving 300,000 people homeless. The more than 5,000 people who were injured overwhelmed the hospitals that were still able to function after the impact.

Had the warehouse storing the stash of chemicals been 400 metres closer to the city, however, fatalities would have measured in the “thousands, if not the tens of thousands”, the professor of blast protection engineering at Sheffield University said.

He and his team spent hours examining the size of the explosion using Google maps to measure the radius of damage that stretched several kilometres.

“This has the equivalent yield to something that's on the scale of the smallest tactical nuclear weapon,” Prof Tyas said

The major damage within a kilometre radius also led him to conclude that it had been caused by a “high explosive yield equivalent, which would be in the order of about 10 per cent of the Hiroshima bomb”.

Prof Tyas added that the blast was similar to a small nuclear event. “Which clearly this wasn't, but it was getting on towards that sort of scale,” he said, before telling The National of his shock at the catastrophe.

“At first, I was almost unable to process the scale of the explosion. It was almost as if I didn't want to believe it was quite on that scale. Then we started doing the numbers and it was very sobering, realising that this was bigger than most things that have ever happened in an urban environment before.”

Prof Tyas and his team were also quick to understand that the sheer size of the explosion ruled out an extremist attack. A large terrorist vehicle bomb would, he said, perhaps contain one or two tonnes of TNT.

“You're looking [with this incident] at something that's 1,000 times bigger than what would normally be classed as a very, very large, devastating terrorist attack,” he said.

“We realised very quickly that there's no way this could have been a conventional weapon attack. It's an order of magnitude bigger than anything you'd expect to see from a normal terrorist explosive attack. So the obvious thing that was pointing towards was some sort of industrial accident.”

There are fears that people could suffer respiratory problems in Beirut from the resulting toxic cloud, which is similar to one that occurred after an ammonium nitrate explosion in Tianjin, China, five years ago.

“If it rains into a cloud like that [one did], you can get things like nitric acid condensing out of it,” said Prof Tyas, whose engineering research concentrates on protecting people from blasts and impact.

The massive grain silo situated right next to the warehouse, which may have held up to 120,000 tonnes of grain, may have acted as a massive sandbag but was unlikely to have saved lives. The blast would have gone both over the top and around it.

“Instinctively, you would think it helped protect anyone who was in that immediate region, but the problem is just the magnitude of the explosion is so big,” he said. “Even an 80 or 90 per cent reduction in the blast loading is still likely to end up in pressures that are fatal to anybody around there.”

Prof Tyas believes that the detonation was possibly the result of a fire, either from a dropped cigarette or electrical fault, that then initiated the massive stockpile of ammonium nitrate.

The explosives expert said that, to prevent future catastrophes, authorities in the first instance should store the deadly substances far from urban areas.

These were the details of the news Beirut blast was like a small nuclear weapon, says explosives expert for this day. We hope that we have succeeded by giving you the full details and information. To follow all our news, you can subscribe to the alerts system or to one of our different systems to provide you with all that is new.