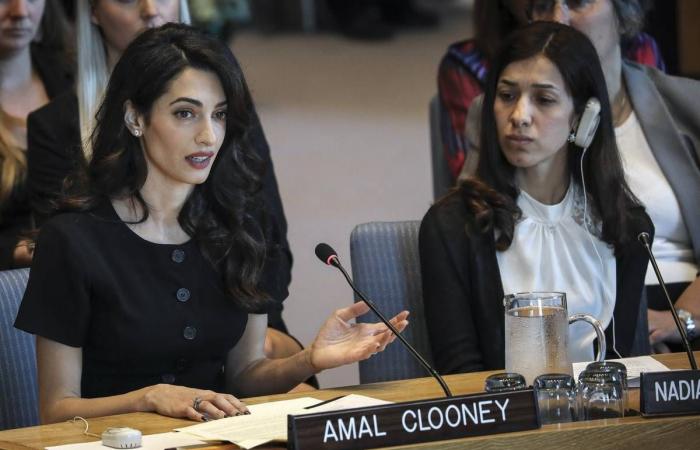 Thank you for reading the news about Murad, Amal Clooney accuse world leaders and UN of failing Yazidis and now with the details

Murad, whose mother and six brothers were killed by Daesh fighters, told a UN commemoration of the Aug. 3, 2014 massacre in Iraq's Sinjar region that the Yazidis feel "abandoned" by the international community.

The "status quo is destroying our community" and international inaction is enabling the extremist group to "accomplish their goal of eradicating the Yazidis from Iraq," warned Murad, who was captured by Daesh and held as a sex slave for months before escaping.

Clooney, the wife of actor George Clooney who represents the Yazidis, said that when she addressed the UN Security Council last year she proposed ways to achieve justice for those who died, are missing and still captive including authorising the International Criminal Court to put Daesh on trial and creating a court by treaty between the UN and Iraq.

"No progress has been made," she said.

"None of the pathways to a court have been studied, pursued, or seriously discussed at the United Nations, or by the Security Council," Clooney said. "No conference of foreign ministers has been convened. No government proposals, or counter-proposals, have been put forward and analysed. No state has offered to host international trials."

She recalled warning the Security Council last year that if no action was taken, Daesh fighters held in makeshift prisons in Syria were at risk of escaping - and there would be no justice.

Clooney said the escapes she feared took place last October when hundreds of Daesh prisoners walked free from those camps.

When the Daesh group swept into northern Iraq in 2014, the militants massacred thousands of Yazidi men and enslaved an estimated 7,000 women and girls. Many managed to escape as US-backed Iraqi forces gradually drove the militants from their self-declared "caliphate" that once spanned a third of both Iraq and Syria in a grueling 3-year campaign.

But in a joint statement, Murad and Clooney said "there is no concerted attempt to search for or rescue over 2,800 women and children who remain missing and in captivity in Iraq and Syria."

They said over 200,000 Yazidis - almost half the community in Iraq - remain displaced in camps without adequate medical treatment and an increased risk of exposure to the ovid-19 virus.

And Murad and Clooney said over 120,000 Yazidis who have returned to Sinjar desperately need health care, electricity, shelter, clean water, sanitation, education and opportunities to make a living.

Murad told the commemoration that the Yazidis are caught in a dispute between the Iraqi government in Baghdad and the Kurdish regional government in Erbil over who will control Sinjar which has curtailed services and investment - and she urged them to quickly resolve it.

While Murad and Clooney said they are grateful that the UN has authorised an international investigation of Daesh atrocities against the Yazidis, Murad stressed that "an investigation is not a trial, and we want our day in court."

"We must not let another year go by and stay in the status quo," the Nobel laureate said. "The international community must fulfill its promise to deliver justice for the Yazidi community. ... Survivors cannot wait another six years for the world to act."

Clooney cited efforts to achieve justice within six years after past atrocities including the Nazi defeat in World War II and the genocides in Rwanda in 1994 and the Bosnian town of Srebrenica in 1995.

More recently, she said, an international team authorized by the UN Human Rights Council is preparing cases against perpetrators of the alleged genocide against the Rohingya Muslim minority in Myanmar. In addition, 57 nations are supporting a case brought by Gambia at the International Court of Justice under the Genocide Convention, and the International Criminal Court is investigating crimes in Myanmar, she said.

"Yazidi survivors deserve no less," Clooney said, stressing that government leaders, UN diplomats and all those with influence have a responsibility to respond.

"Doing nothing is not only wrong, it is dangerous because these fighters are not going away, and their toxic ideology continues to spread," she said. "And justice is possible now, just as it has been possible before, if only it is made a priority."

These were the details of the news Murad, Amal Clooney accuse world leaders and UN of failing Yazidis for this day. We hope that we have succeeded by giving you the full details and information. To follow all our news, you can subscribe to the alerts system or to one of our different systems to provide you with all that is new.