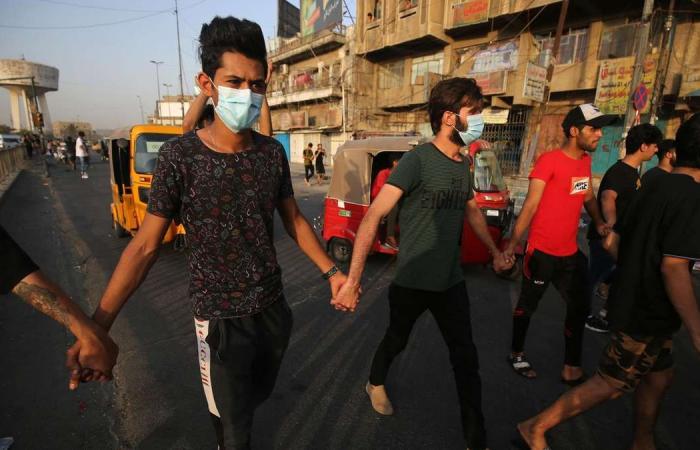 The viral video shows three members of the Interior Ministry’s Law Preservation Forces set up to handle protests standing around a teenage boy who is sat on a chair in his underwear with bruise marks on his body. They curse his mother and threaten the young man with sexual assault as one of them cuts his hair with a blade.

Local media reported the boy was one of dozens of civilians who had been detained for joining anti-government protests.

Another – apparently later - video shows the boy receiving treatment at what looks like a make-shift clinic typical of those set up by demonstrators who have been on the streets since October demanding political change to address the country’s many ills. The youth says he was “standing in water” when the three officers came for him.

“One of them grabbed me by the throat and took me,” he says.

The Law Preservation Forces was formed by former prime minister Adel Abdul Mahdi as the Iraqi uprising broke out in October last year and comprises officers from the Interior Ministry’s Rapid Response units as well as other officers.

Although the videos have been widely shared in recent days, the Iraqi Interior Ministry said on Sunday that the assault took place in April and that work was being done to arrest the officers implicated.

Mr Al Kadhimi on Sunday ordered the head of Law Preservation Forces, Gen Saad Khalaf, to be confined to his headquarters and the force be “re-examined as a formation,” state media said.

Since the protests against mass unemployment, lack of basic services and corruption began late last year, well over 500 demonstrators have been killed by security forces or Iran-backed government-sanctioned Iraqi militias.

Dozens of other activists, leading figures and those taking part have been kidnapped or disappeared. Last month, leading security analysts and informal government adviser Hisham Al Hashimi was murdered outside his home after receiving death threats from Iran-backed militias.

The videos showing the abuse of the teen are being held up by activists as further evidence of the torture that human rights campaigners say is regularly metered out with impunity by Iraq’s security services.

Mr Al Kadhimi, a reformist who took office in May this year, has promised change and accountability in a bid to ease anger on the streets and has vowed to investigate the killings and abuses against demonstrators. But analysts worry that the former intelligence agency head, who has no support base of his own, will be unable to significantly curtail the powerful armed militias.

These were the details of the news Iraq's prime minister takes action on video of officers beating teenager for this day. We hope that we have succeeded by giving you the full details and information. To follow all our news, you can subscribe to the alerts system or to one of our different systems to provide you with all that is new.