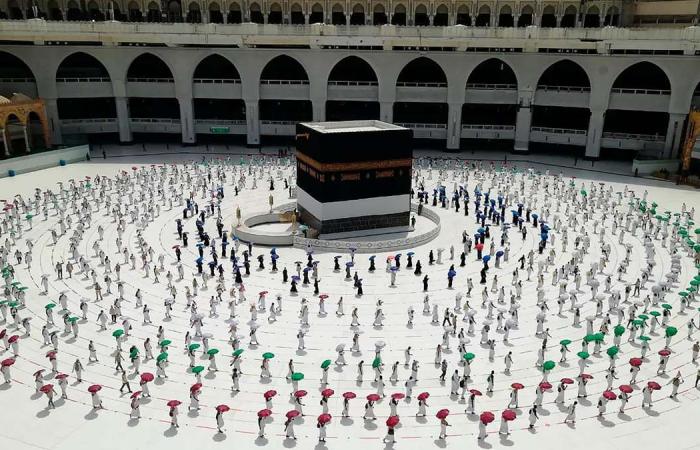 Hind Al Soulia - Riyadh - The ultimate rite of passage on the Hajj is circling the Kaaba, when pilgrims lap the black stone in the direction of which all Muslims pray. Its symbolism dates back to 2,000 BCE, when Hagar, wife of the Prophet Ibrahim, and their son Ismael were stranded alone in the desert around Makkah.

Parched and hungry, with her son almost dead from thirst, Hagar ran back and forwards between the hills of Safa and Marwa in search of water until, according to Islamic belief, she prayed to Allah and a spring burst from the ground to sustain them.

The shrine built here by the Prophet Ibrahim on his return is where the Kaaba now stands, marking 1,400 years of Islamic history and the foundation of the Hajj – the ritual every able Muslim must undertake in the service of Allah.

But its roots go back even further, with variations of the practice documented across different faiths. “Hajj is just about the oldest ritual humankind has known,” explains Adnan bin Mohammed Al Harthi Al Sharif, professor of Islamic Civilisation and Archaeology at Saudi Arabia's Umm Al Qura University.

Data collected across the centuries and classic sources chronicle the history of the Hajj. Hajj rituals surface in Buddhist traditions, which include the circumambulation of sacred objects, and in biblical faiths, which tell variations on the story of the Prophet Ibrahim (or Abraham) and his son.

The long lineage of the Hajj reaches back to the time of Adam, Mr Al Sharif explains, underscoring its authenticity and importance to generations of Muslims.

Little has changed in the rituals practiced since the early days aside from modifications made by the Quraysh tribe, who ruled the area at the time of the Prophet Mohammed and claimed control of the Grand Mosque in Makkah, he said.

These included changing the dates of the Hajj to fit their calendar and introducing the practice of spending the night at Muzdalifah on the 9th day of Dhul Hijjah. There were also specific families, known as Sufa, who were charged with directing pilgrims during the Hajj journey.

There have been several interruptions to the Hajj throughout history, although rumours that it has been halted on 40 occasions are untrue, Mr Al Sharif said. In troubled times – during unrest and extreme weather, including flooding – the number of participants may have been significantly reduced, but in most cases it still went ahead.

“This is no longer a concern because the state took many preventive measures such as [improving] the drainage system which is now considered advanced compared to how it was before,” he said.

In 1352, a cholera epidemic during Hajj season saw many pilgrims die but others continued to perform the rituals in one of several such episodes over the years, Mr Al Sharif explains.

On one occasion, when the Qarmations invaded Makkah and stole the Black Stone in 930, the official Hajj did cease for a time. After forcing the Abbasid rulers to pay a huge ransom about 23 years later, it was returned, accompanied by a note saying "By command we took it, and by command we have brought it back."

Even during this period though, individuals continued to perform the Hajj of their own accord, Mr Al Sharif said.

Today, in the face of a global pandemic, Saudi Arabian authorities have continued the tradition, limiting the number of pilgrims to the low thousands and introducing a series of new health measures so that Hajj 2020 can go ahead.

“What the state is doing now is part of the culture of the Islamic civilisation … It is logical to protect people’s lives without crippling the Farida [the Islamic duty/ritual] by limiting the number of pilgrims to only a few.”

These were the details of the news Hajj rituals have continued in the face of crises for centuries for this day. We hope that we have succeeded by giving you the full details and information. To follow all our news, you can subscribe to the alerts system or to one of our different systems to provide you with all that is new.