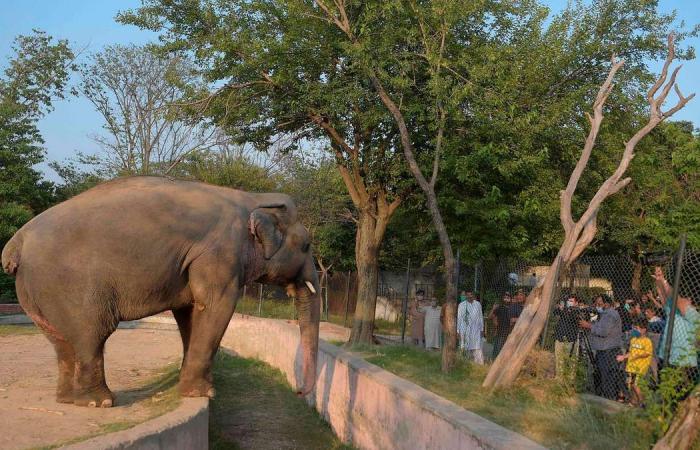 Hind Al Soulia - Riyadh - A Pakistani court has approved the relocation of a mistreated elephant from a small Islamabad zoo to an elephant sanctuary in Cambodia following a campaign by animal rights activists backed by the pop star Cher.

The 33-year-old Asian Elephant named Kaavan was chained up, isolated and denied proper care during the hot summer months. Conservation experts say elephants need a roaming area of 150 square kilometres, but Kaavan was kept in an enclosure of less than 2.5 kilometres with little water to bathe in and an inappropriate diet.

“This is a sad step to take, but the correct one for Kaavan,” Mian Aslam Amin, Pakistan’s federal minister for climate change told The National.

The ministry set up a technical team under the Islamabad Wildlife Management Board which recommended that Kaavan be retired from zoo life and rehomed at the Cambodia Wildlife Sanctuary.

“We want to ensure a totally safe relocation without any harm to Kaavan,” Mr Amin said.

Experts will visit from Cambodia to advise on plans for the journey, after which Kaavan is expected to be moved by plane. Once in Cambodia, he will “live in wilderness for the remainder of his life,” Mr Amin said.

Kaavan was given to Pakistan as a young calf in 1985 by the government of Sri Lanka but in recent years he was chained for the safety of the visitors. The elephant was being kept alone after his only companion, an elephant named Saheli, died in 2012.

Wildlife experts said he has recently shown symptoms of mental illness and had become aggressive.

Kaavan’s case gained worldwide attention, including a petition signed by more than 400,000 people to free the chained elephant. He even gained a celebrity fan – the singer Cher – who championed his cause on the world stage.

Eventually the Pakistan courts intervened and ordered Kaavan’s freedom in May, instructing wildlife officials to send him to a suitable sanctuary in short order.

On hearing of the court order for Kaavan’s freedom last month, the pop star and animal rights activist tweeted: “It’s so emotional for us that I have to sit down.”

The Cambodia Wildlife Sanctuary said Kaavan is expected to arrive in six to eight weeks.

“Huge thanks to the many people who have fought for his freedom over the last five years, thank you too, to those who signed petitions asking for his release,” a post on the organisation’s Facebook page read.

“Now our task is to prepare for his arrival, including building him a shelter to suit his stature.”

Safwan Shahab Ahmad of the Pakistan Wildlife Foundation has monitored Kaavan since 1992 and is disappointed to see the old elephant go.

“Zoo officials have not provided him [with a] natural habitat,” he told The National.

He believes Kaavan has been suffering from mental illness since 2006 and hopes his new home will provide him with a safe environment to spend the rest of his days.

The average lifespan of an Asian elephant is 47 years but in the wild they can live up to 60. The species, which is classified as endangered by the International Union for the Conservation of Nature (IUCN) has declined by an estimated 50 per cent over the past 75 years.

May’s court order also issued a ruling ordering the temporary relocation of several other animals in the Islamabad zoo, including lions, bears and birds, until it improves the living standards of the animals under its care.

These were the details of the news Pakistan to relocate lonely elephant to Cambodian wildlife sanctuary for this day. We hope that we have succeeded by giving you the full details and information. To follow all our news, you can subscribe to the alerts system or to one of our different systems to provide you with all that is new.