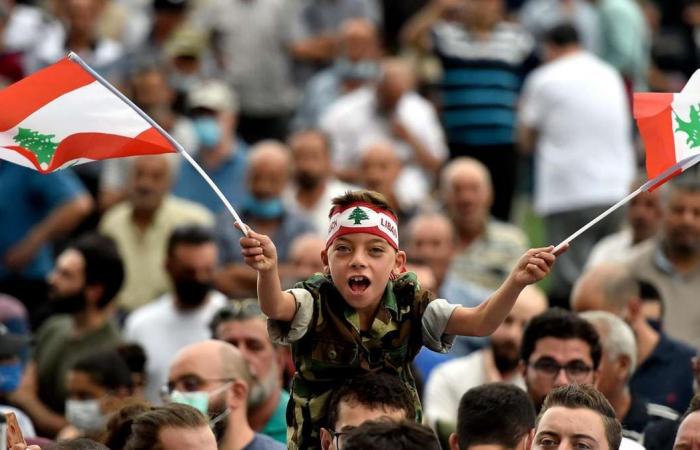 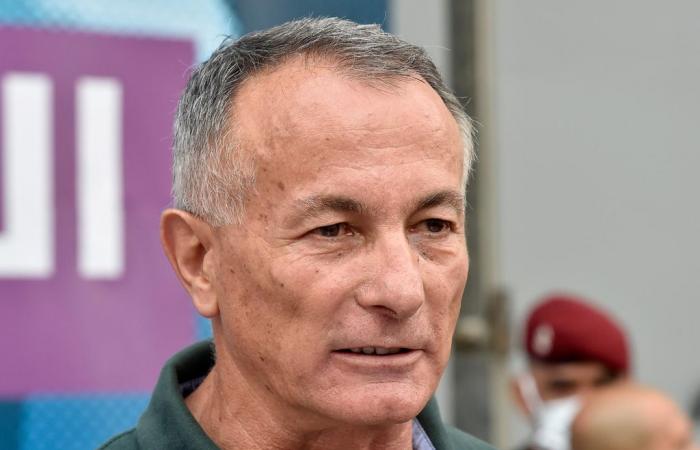 “We must continue our revolution and change all this system,” said protester Mohaj Chaaban, who attended a rally in Beirut’s Martyr’s Square.

“It’s 2020 in Lebanon and we don’t have electricity, we don’t have access to good schools, we don’t have a medical system, we have nothing,” Mr Chaaban told The National, referring to the country’s crumbling infrastructure that has worsened with the current economic crisis.

A dollar crunch that caused the local currency to devaluate last summer pushed hundreds of thousands of Lebanese on to the streets on October 17 in what many supporters of the anti-government movement have dubbed the ‘October revolution’.

But protests petered out after Hassan Diab’s government was formed in January with the promise that it would address the country’s failing economy. However, little to no reforms were implemented and the government has hit a brick wall in negotiations for a bailout with the IMF.

Meanwhile, half the Lebanese have been pushed into poverty, the local currency has lost over 80 per cent of its value on the black market, and fuel shortages have disturbed everyday life with electricity cuts for about 20 hours a day and disturbances in mobile network coverage.

Both former Labour and Telecom Minister Charbel Nahas and former commander of the Lebanese army’s rangers regiment, retired brigadier general Chamel Roukoz, organised the protest in downtown Beirut, in an attempt to encourage the Lebanese to take to the streets once again.

“Our project is easy,” said Mr Nahas in a speech, saying his party wanted a “peaceful transfer of power to a government with legislative powers for a period of 18 months with two tasks: (...) managing the crisis fairly and (...) establishing the legitimacy of the only real possible state in our country, which is the civil state.”

Both Mr Nahas’ party, Citizens in a State, and Mr Roukoz, who was accompanied by a delegation of retired soldier, advocate for the end of Lebanon’s sectarian power-sharing system and for the transition to a “civil state” in which government jobs would be based on competence uniquely and not on sectarian affiliations.

Though Lebanon’s new government has made similar calls in the past and berated sectarianism as one of the reasons for Lebanon’s economic collapse, it has continued distributing key administrative jobs along religious lines.

“We want clean and honest people to govern the country,” said a woman who gave her name as Mina, and was wearing a mask with the Lebanese flag, with a matching headscarf and top. “There’s so much hunger, poverty … There’s nothing that works in this country. We are under zero. We went backwards a hundred years,” she said.

In a speech, Mr Roukoz called for “the formation of a government of independent specialist with exceptional powers” and an “investigation and audit of all accounts of funds, ministries, administrations, and all those who have had a job in public affairs.”

Mr Roukoz, one of President Michel Aoun’s three sons-in-law, has morphed into one of the government fiercest critics though he remains careful to not directly attack the president himself. Mr Roukoz is more vocal in his criticism of Gebran Bassil, his brother-in-law who heads the president’s party, the Free Patriotic Movement.

“It is best for those who say they have not been allowed to work, to resign and make room for others who are able to work,” said Mr Roukoz in his speech on Friday, in a thinly veiled reference to Mr Bassil.

Retired army general André Bou Maachar said that retired soldiers joined the protest to “trigger the momentum of the revolution.”

“Change is imminent. It’s a must. We can’t continue as we were before because the financial and economical crisis is building up a momentum towards violence … We ask those in power to be more proactive in providing solutions,” he told The National.

“We are trying to give [the revolution] a purpose,” said Anis Germani, a member of Citizens in a State, who bemoaned the dwindling number of protesters since last October. “People have lost hope.”

A few kilometres away from Martyr’s Square, another group of protesters marched through Beirut at the call of the National Bloc. Like Citizens in a State, the National Bloc is a secular party that is not represented in the government.

“The biggest challenge for us and young people who want to stay in Lebanon is to build a [political] project to which a majority of Lebanese can adhere to, a project that is authentically Lebanese,” said Karl Khoury, a lawyer and member of the National Bloc’s assembly.

“It can only be done by pressure from the street. But that’s very hard. It’s asking a lot from the Lebanese people to protest for months on end considering the very difficult financial and social circumstances,” he told The National.

“Lebanon used to be the Switzerland of the Middle East,” said Mr Khoury, referring an oft-repeated cliché́ about Lebanon that refers to the country before its 1975-1990 civil war.

“Today in the schools of the entire world, people will study how Lebanon became the Venezuela, or the Somalia of the Middle East … We cannot accept this. We must live with more dignity than this,” he concluded.

These were the details of the news Lebanese protesters want to revive their ‘revolution’ for this day. We hope that we have succeeded by giving you the full details and information. To follow all our news, you can subscribe to the alerts system or to one of our different systems to provide you with all that is new.