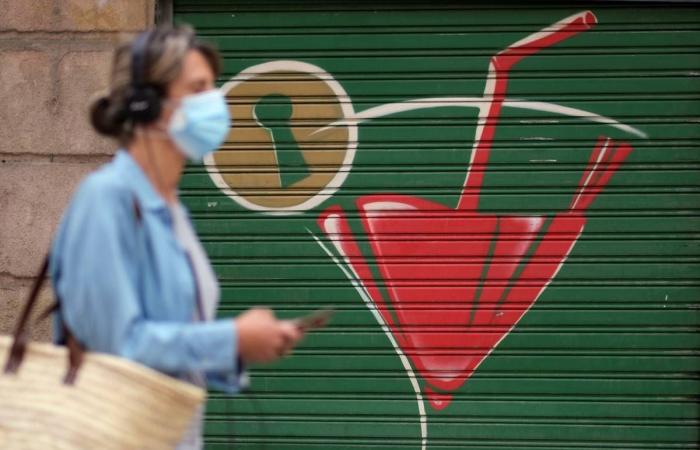 Aden - Yasmine El Tohamy - Government also ordered the closure of cinemas, theatres and nightclubs and banned gatherings of over 10 people.

The Catalan regional government on Friday urged the nearly four million residents of Spain's second city Barcelona to stay at home unless absolutely necessary or face a potential new lockdown after a rise in coronavirus cases.

The regional government also ordered the closure of cinemas, theatres and nightclubs and banned gatherings of more than 10 people in the coastal city, spokeswoman Meritxell Budo told a press conference.

Barcelona is one of Europe's most visited cities. Restaurants will have to limit capacity to half the usual amount.

Residents have also been asked not to flee to second homes outside the north-eastern city, for a period expected to last about two weeks.

"We must take a step back to avoid returning in coming weeks to a total lockdown of the population," Budo said, barely three weeks after Spanish confinement measures were lifted.

Residents had to "act quickly and decisively to avoid finding ourselves in the same situation as in March," she added.

When the epidemic first hit Spain, Prime Minister Pedro Sanchez's government declared a state of emergency on March 14 and imposed one of the world's tightest lockdowns.

Catalonia and the neighbouring Aragon region, where coronavirus cases have also spiked, are being closely monitored among the more than 150 virus clusters across the country.

West of Barcelona, 160,000 people in Lerida and surrounding towns were placed under lockdown Wednesday following a stand-off between the regional government and judicial authorities.

Many Spanish regions have made it mandatory to wear face masks in public, even if people maintain social distancing.

Spain has reported more than 28,400 deaths from Covid-19, making it one of the countries most affected in Europe.

The regional government's urging people to stay at home is only a recommendation -- but Budo warned it represented a "last chance" if further restrictions were to be avoided.

The latest restrictions must in any case be ratified by a judge before they can come into force.

Last Monday, one local court ruled it would not ratify a home confinement order regional authorities imposed on Lerida and surrounding areas, despite health officials insisting the measure was crucial.

Barcelona itself has seen a near tripling of coronavirus cases in the past week from 279 last week to 733 this, local officials say.

Fernando Simon, director of Spain's health emergency centre, said Thursday that Catalonia and Aragon are seeing "a certain community-based transmission" of the virus.

The heightened concern in Catalonia comes after a spike in cases in L'Hospitalet de Llobregat, the region's second city with a population of 256,000 where the population density is one of Europe's highest.

The Catalan government, criticised for a perceived slowness to react earlier in the crisis, Thursday said it is taking on 500 people to step up contact tracing to facilitate the isolation of virus sufferers.

These were the details of the news Barcelona residents urged to stay home after rise in coronavirus cases for this day. We hope that we have succeeded by giving you the full details and information. To follow all our news, you can subscribe to the alerts system or to one of our different systems to provide you with all that is new.