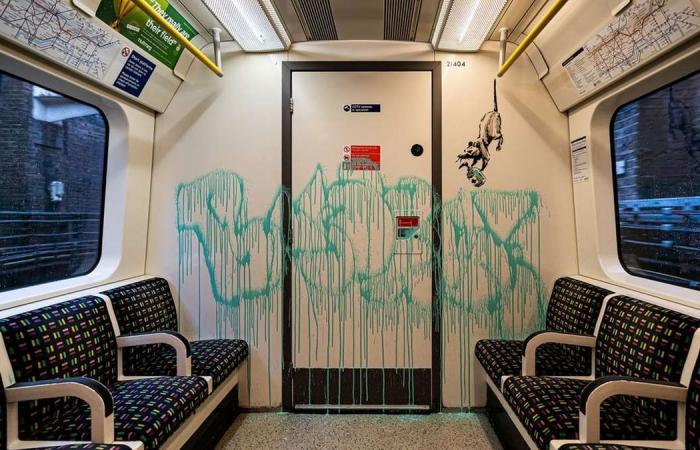 Thank you for your reading and interest in the news Banksy’s face mask artwork worth £7.5 million scrubbed from London Underground train and now with details

Hind Al Soulia - Riyadh - Banksy has shared a new stencilled piece to Instagram on June 9, 2020, with the caption asking the question 'What should we do with the empty plinth in the middle of Bristol?' Instagram / Banksy

Banksy unveiled a new piece of art on Instagram on June 6, 2020, inspired by the death of George Floyd and Black Lives Matter protests taking place around the world. Instagram / Banksy

The graffiti artwork by Banksy named 'Girl with a Pierced Eardrum' is seen with a protective face mask at Hannover Place on April 27, 2020 in Bristol, England. Getty Images

Banksy has unveiled a new piece in his bathroom, as he 'works from home' amid the Covid-19 pandemic in March 2020. Instagram / Banksy

People gather round a new Christmas mural by the street artist Banksy in Birmingham, England. The piece made a statement about homelessness in December 2019. Reuters

Banksy's work 'Devolved Parliament' is displayed during a photocall at Sotheby's auction house in London, Britain, on September 27, 2019. The work showing chimpanzees as MPs in Britain's House of Commons was sold for £9.9 million at auction on October 3, 2019. EPA

Banksy artwork in Marble Arch in London, Britain on April 26, 2019. The new wall art is at the site of the Extinction Rebellion camp at Marble Arch where climate change demonstrators protested for more than a week in London. EPA

Museum employees hang Banksy's 'Love is in the Bin' artwork at the Frieder Burda Museum in Baden-Baden., Germany, 04 February 2019. The Frieder Burda Museum will be showing from 05 February 2019 to 03 March 2019 to the public for the first time the Banksy work 'Love is in the Bin', acquired by a European collector and auctioned off at Sotheby's in London. EPA

Banksy’s 'There is Always Hope' is one of his most replicated pieces of work. EPA

Banksy's satirical mural 'Season's Greetings' (2018) was painted on a garage in the town of Port Talbot, Wales. Getty Images

A woman looks at an artwork by British artist Banksy, as she visits the unauthorised exhibition 'Banksy, genious or vandal?' during its opening in Madrid, Spain in December 2018. EPA

A piece by the street artist Banksy, acquired by actor Robin Williams is among his auction items on display in Los Angeles, California, USA in September 2018. EPA

A view of a Brexit-inspired mural by Banksy depicting the European flag in Dover, Britain, 31 July 2018. The graffiti that appeared on a building near Dover's ferry terminal shows a worker removing one of the 12 stars from the EU flag. EPA

An artwork attributed to Banksy is of a woman veiled in mourning next to the Bataclan concert venue in Paris where , where 90 people where killed in a terror attack in November 2015. The work appeared in June 2018, but in January 2019, it was reported that the work had been stolen. EPA

An artwork attributed to Banksy showing Napoleon rearing his horse, wrapped in a red cloak in the 19th district of Paris, France, 26 June 2018. EPA

A woman walks by an artwork attributed to Banksy showing a rat on a popped cork from a champagne bottle in the 18th district of Paris, France, 26 June 2018. EPA

Street art work by Banksy, the anonymous British street artist is of a rat In the inner portion of a clock above a closed former bank building on 14th Street and 6th Avenue in New York City, USA, in March 2018. EPA

A Banksy painting along Old Main Street on the first day of the 2017 Sundance Film Festival in Park City, Utah, USA. EPA

The 'Flying Copper' by Banksy on display at the exhibition 'The Art of Banksy' in Berlin, Germany, in June 2017. EPA

The Bridge Farm Primary School where a new 'Banksy' authenticated mural appeared on the school wall during half term in Withchurch, Britain in June 2016. The mural was a thanks to the school for naming a school wing after him. EPA

Banksy's 'The Son of a Migrant from Syria' depicts Apple's Steve Jobs in the refugee camp called 'The Jungle' in the port of Calais, France, 25 December 2015. Banksy said of the work: 'We are often led to believe that immigration will pump a country's resources, but Steve Jobs was the son of a Syrian immigrant Apple is the most profitable company in the world, it pays more than 7 billion per year in taxes - and it is only because they allowed in a young man of Homs.' EPA

A steward is seen outside Bansky's 'Dismaland', a temporary exhibition that opened at a derelict seafront lido in Weston-Super-Mare, England in 2015. Getty Images

The 'Twin Towers in Tribeca' art installation created by British street artist Banksy is seen down in Tribeca in New York City, USA, on October 15, 2013. EPA

A mural by British street artist Banksy is seen on a side of a building in Queens, New York, USA, 14 October 2013. EPA

A second mural by Banksy in New Orleans, Louisiana, USA, in September 2008. EPA

A graffiti painting by British graffiti artist Banksy in London, in May 2008. EPA

A piece by Banksy, which was painted to mark the Queen's Jubilee 30 May 2002, in Clink street, near London Bridge. EPA

These were the details of the news Banksy’s face mask artwork worth £7.5 million scrubbed from London Underground train for this day. We hope that we have succeeded by giving you the full details and information. To follow all our news, you can subscribe to the alerts system or to one of our different systems to provide you with all that is new.