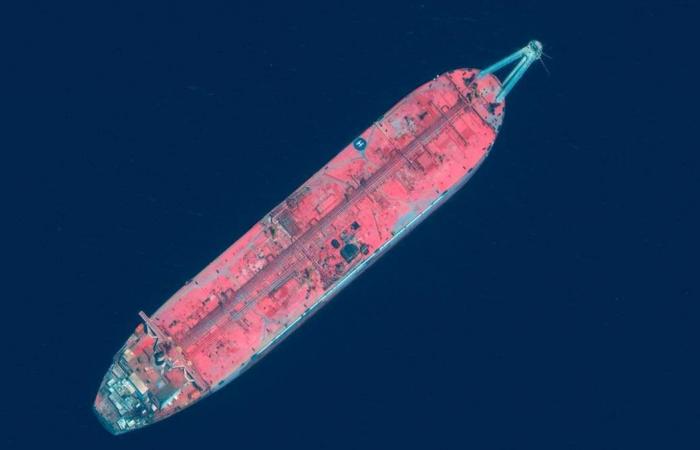 Thank you for your reading and interest in the news Yemen's Houthi rebels will allow access to abandoned tanker, UN sources say and now with details

Hind Al Soulia - Riyadh - Yemen's Houthi rebels have agreed to give the UN access to a stranded oil tanker that risks causing an environmental disaster off the coast of the war-divided country, sources at the world body say.

The UN last week said it was extremely concerned after water entered the engine room of the FSO Safer, a tanker holding 1.1 million barrels of crude oil, which has been abandoned off the Red Sea oil terminal of Ras Issa for more than five years.

The Iran-backed rebels, who control the port, sent a letter approving a visit by a UN technical team to the tanker, the sources told Reuters.

The 45-year-old vessel was used as an offshore storage platform for Yemen's oil exports but has had virtually no maintenance for five years since war broke out in the country.

The Houthis in late 2014 seized the capital, Sanaa, from the internationally recognised government of President Abdrabu Mansur Hadi.

Yemen's government has warned that the Safer could explode and cause "the largest environmental disaster regionally and globally". It urged the UN to take up the issue.

UN spokesman Stephane Dujarric said on Friday that prospects for a mission to the site had been revived and that if an inspection team is allowed on board it will conduct light repairs and determine the next steps.

"We hope logistical arrangements will be quickly completed so this work can begin," Mr Dujarric said.

The UN Security Council is due to hold a meeting on Wednesday to discuss the Safer, which is mired in disputes over control of ports and revenues.

Rebel leader Mohamed Al Houthi said on Twitter last month that he wanted guarantees that the vessel would be repaired and that the value of the oil on board be used to pay salaries of their employees.

The market value of the oil is now estimated at $40 million (Dh146.9m), half what it was before crude prices crashed, although experts say poor quality could push it even lower.

As with other economic and aid issues in Yemen, the tanker has become a bargaining chip, with the Houthis accused of using the threat of disaster to secure control of the value of the cargo.

Yemeni Prime Minister Maeen Saeed on Thursday said the money for the oil should be spent on health and humanitarian projects.

The UN is discussing with Yemen's warring parties about arranging the sale of the crude and dividing proceeds between the government and the rebels.

Yemen's oil and gasfields are in the country's eastern and southern areas held by the government but production has collapsed since the conflict began.

The rebels still control Sanaa and most big urban centres, including the main Red Sea port of Hodeidah, near Ras Issa.

If the vessel ruptures "you're going to have two catastrophes", said Lise Grande, the UN's humanitarian co-ordinator for the country.

"There's going to be an environmental catastrophe that's bigger than almost any other similar kind," Ms Grande told AFP.

"And it's going to be a humanitarian catastrophe because that oil will make the port of Hodeidah unusable."

The civil war has killed more than 100,000 people and caused what the UN describes as the world's largest humanitarian crisis.

The UN recently launched online talks among the parties to agree to a permanent ceasefire and confidence-building steps to restart peace negotiations.

These were the details of the news Yemen's Houthi rebels will allow access to abandoned tanker, UN sources say for this day. We hope that we have succeeded by giving you the full details and information. To follow all our news, you can subscribe to the alerts system or to one of our different systems to provide you with all that is new.