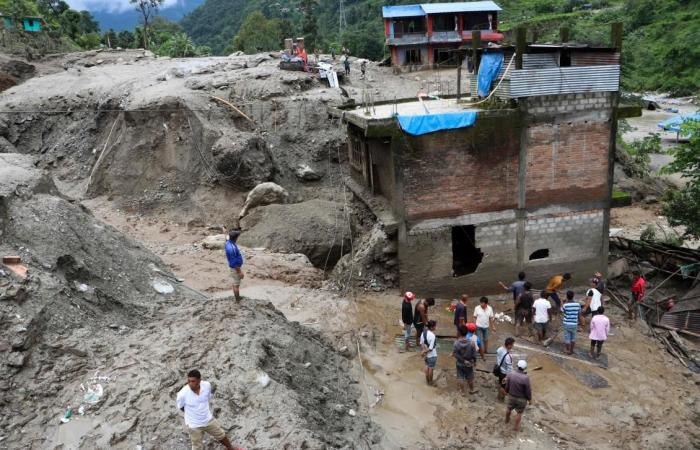 Thank you for reading the news about Floods, landslides kill 23 in Nepal, dozens missing and now with the details

Jeddah - Yasmine El Tohamy - KATMANDU: Heavy rains triggered flash floods and landslides that killed at least 23 people and displaced thousands in western Nepal, officials said on Saturday.
Nine people were killed and more than 30 were missing in Myagdi district, 200 km (125 miles) northwest of the capital Katmandu, where several houses were destroyed on Friday, district administrator Gyan Nath Dhakal said.
“The toll is expected to increase as rescuers had just reached the remote site to look for victims,” Dhakal said, adding that 50 people had been plucked to safety using helicopters.
In neighboring Kaski district, seven people were killed, said a second government official in the tourist town of Pokhara.
Another seven were killed in Jajarkot district in the far west.
“We are searching for eight people who are still missing,” said Kishore Shrestha, a senior police official.
In the southern plains bordering India, the Koshi river, which causes deadly floods in the eastern Indian state of Bihar almost every year, was flowing above the danger level, police said.
Landslides and flash floods are common occurrence in mountainous Nepal during the June-September monsoon every year.

These were the details of the news Floods, landslides kill 23 in Nepal, dozens missing for this day. We hope that we have succeeded by giving you the full details and information. To follow all our news, you can subscribe to the alerts system or to one of our different systems to provide you with all that is new.