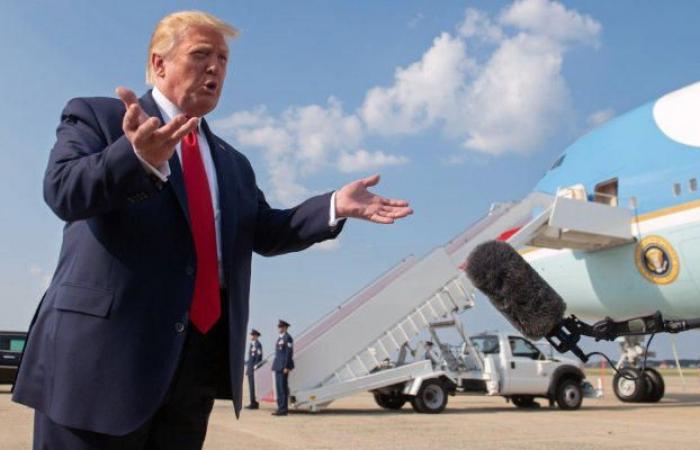 Jeddah - Yasmine El Tohamy - WASHINGTON: Another record number of coronavirus cases overshadowed the start of America’s Independence Day weekend Friday as the surge in infections prompted Britain to blacklist travelers from the US, intensifying its isolation.

With beaches closed from coast to coast and officials urging Americans to stay home, the somber mood heading into what is usually a weekend of barbecues and sunshine underscored the struggle to extinguish COVID-19 at the epicenter of the global pandemic.

“It is an unbelievable trajectory,” said Faisal Masud, director of critical care at Houston Methodist Hospital in Texas, which officials say is dangerously close to being overwhelmed.

Touching almost every country on Earth since it emerged in China late last year, the coronavirus has infected at least 10.9 million and killed 522,000 globally, shattering previously buoyant economies and bringing public life to a standstill.

But while Europe and much of Asia have largely managed to bring the virus under control — so much so that England was preparing to reopen pubs, restaurants and cinemas — in the US it has claimed nearly 130,000 lives amid a sharp resurgence of cases which top infectious disease expert Anthony Fauci said “puts the entire country at risk.”

The world’s largest economy broke its record for new cases for the third day in a row Friday, with more than 57,000 infections in 24 hours. It’s expected to record its three millionth infection next week, with cases rising the south and west particularly.

US President Donald Trump — at Mount Rushmore for a fireworks celebration with thousands of attendees in close quarters and masks not required — has so far dismissed the deluge of new cases.

In a tweet late Thursday he said the rise was because “our testing is so massive and so good, far bigger and better than any other country,” calling that “great news.”

He added: “Even better news is that death, and the death rate, is DOWN.”

But his predecessor Barack Obama called for Americans to be “safe and smart.”

“It’s going to take all of us to beat this virus. So wear a mask. Wash your hands. And listen to the experts, not the folks trying to divide us,” he tweeted Friday.

The World Health Organization called on countries hit by serious outbreaks to “wake up” to the realities.

“People need to wake up. The data is not lying,” WHO emergencies director Michael Ryan told journalists in Geneva.

“It is never too late in an epidemic to take control.”

At least 14 states are seeing their weekly averages hit record highs heading into the holiday weekend, the Washington Post reported.

In Florida, where new cases are hovering at around 10,000 daily, Miami’s usually-crowded South Pointe Beach was closed Friday save for patrolling police and a wandering cat.

Beaches in Los Angeles will also be closed over the weekend, and Major League Baseball officially canceled its 2020 All-Star Game on Friday, the first time since World War II that the mid-season showcase — which had been set for July 14 — has been scrapped.

The US closures stand in stark contrast to Britain and Europe, once the epicenter of the virus but now restarting businesses and lifting travel restrictions, trying salvage the summer tourist season.

Pubs in England reopen on Saturday for the first time since late March — as restaurants, cinemas, galleries, museums and hotels also prepare to welcome back customers.

Travelers arriving into England from more than 50 nations — but not the US or mainland China — will from July 10 no longer be required to undergo 14 days of self-isolation.

The decision follows the European Union, which earlier this week left the US, Brazil and Russia off its final list of nations safe enough to allow their residents to enter its borders.

The European Union meanwhile authorized the use of the anti-viral drug remdesivir for COVID-19 — the first treatment approved to deal with the disease — although the United States has bought most of the global stock.

Europe is also beginning a reckoning on its virus response. French prosecutors said they were launching an inquiry into former prime minister Edouard Philippe’s handling of the virus crisis, following his resignation Friday.

But despite optimism the economic fallout is still unfolding: Air France said Friday it planned to eliminate 7,580 jobs at the airline and its regional unit Hop! by the end of 2022 because of the coronavirus crisis.

Cases have been skyrocketing across Latin America.

The region now has the second most cases in the world with 2.73 million, ahead of Europe on 2.71 million but behind North America.

Brazil, the region’s largest economy, has 1.5 million confirmed cases and 63,000 deaths, second only to the United States.

Cases also continue to surge in the Middle East, where worst-hit Saudi Arabia passed 200,000 infections. Countries across Africa meanwhile forged ahead with plans to reopen, despite steadily rising cases.

In Asia, however, swift lockdowns have largely made progress — including in Beijing, which said Friday it was lifting most travel restrictions after successfully containing a new outbreak.

China also vowed to gradually phase out the slaughter and sale of live poultry at food markets.

The virus is believed to have emerged at a market that sold live animals in the central city of Wuhan late last year.

These were the details of the news New record number of COVID-19 cases overshadows US Independence Day festivities for this day. We hope that we have succeeded by giving you the full details and information. To follow all our news, you can subscribe to the alerts system or to one of our different systems to provide you with all that is new.