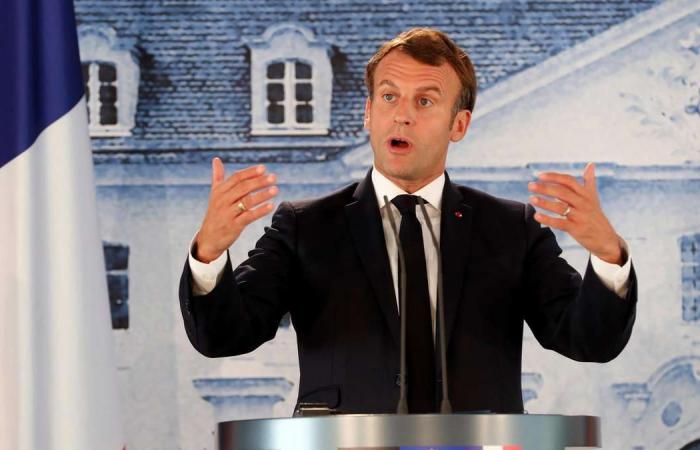 Hind Al Soulia - Riyadh - Turkey's front-line push to bolster its allies in Libya was castigated as a "criminal" undermining of the Nato alliance by French President Emmanuel Macron hours before a leading German think tank called on Tuesday for Berlin to take a more active role in regional conflicts.

"I think it's a historic and criminal responsibility for a member of Nato," Mr Macron said as he visited German Chancellor Angela Merkel for the first time since the coronavirus outbreak began.

The French president strongly condemned Turkey’s presence in Libya as “unacceptable" and “doesn’t respect any of its commitments” made at a German-led peace conference in Berlin earlier this year. He accused Turkey of shipping extremist fighters into Libya's capital, Tripoli, as part of a dramatic intervention to tilt the balance of favour on the battlefield. "Turkey claims it – it is its official boats, its military, its policy," he said.

The European Union's ineffective foreign policy has been exposed by its marginalisation in conflicts such as those in Libya and Syria. A leading foreign policy institute, Munich Security Conference, used a report launch on Tuesday to call for much more robust EU policies, lead by Berlin.

"Europe’s lack of influence on the course of conflicts that have affected its core interests – most notably those in Syria and Libya – has been all too evident. While Europeans have been quick to criticise the United States for abandoning its traditional role, the European approach has been even more impotent and inward-looking than that of the United States,” the report stated. "It is obvious that the EU will not learn to speak the language of power as long as Germany does not."

Divisions between European nations were not just evident over war zones that have seen millions of refugees flee towards Europe, provoking a political crisis over migration within the bloc. Mr Macron has decried German reluctance to take stronger positions and said Europe is "waiting for answers" from the union's most prosperous and populous member.

"Germany has to end the 'small nation' thinking of the past," the think tank's report added. "At a time when Europe’s ability to relearn the language of power is called for on various fronts, Germany can no longer pursue policies that mute the EU even further."

Tensions between France and Turkey escalated after an incident on June 10 between Turkish warships and a French naval vessel in the Mediterranean Sea.

France considered it a hostile act under Nato’s rules of engagement.

France accused Turkey of repeated breaches of the UN arms embargo and of importing Syrian fighters to Libya.

Libya has been in turmoil since 2011 after an uprising that toppled an killed its leader, Muammar Qaddafi.

The country has since been split between rival administrations in the east and the west, each backed by armed groups.

Mr Macron denied backing the eastern forces, led by commander Khalifa Haftar, stressing that France was in favour of a “political solution”.

Turkey backs the GNA government that controls the Tripoli with the aid of local militias and fighters from the coastal city of Misurata.

These were the details of the news Macron calls for German response over Turkey's 'criminal' actions in Libya for this day. We hope that we have succeeded by giving you the full details and information. To follow all our news, you can subscribe to the alerts system or to one of our different systems to provide you with all that is new.