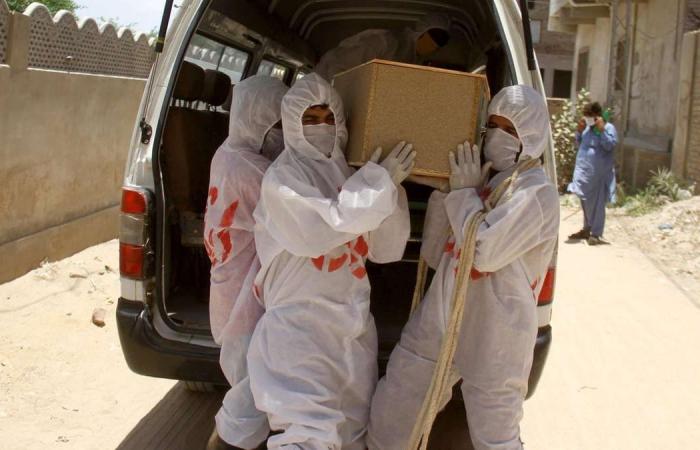 Hind Al Soulia - Riyadh - Manzoor Abbasi died on June 11. Later that day, his body was lowered into the ground in the village of Murree, by strangers as his family stayed away.

Such is the fear of catching coronavirus in Pakistan, where cases of the disease which sparked a global pandemic reached 176,617 including over 3500 deaths on Sunday.

Abbasi’s son, Muhammad Ali, is diabetic and was advised by his doctor not go anywhere near his father’s body. The grief and guilt haunt him and his other family members, all of whom chose to miss 60-year-old Abbasi’s last rites for fear they may contract the virus.

“The funeral and burial arrangements were made by the rescue workers and police everyone was panicked,” Mr Ali told The National.

His younger sibling Ikram Hassan, a pseudonym, said he stayed home to protect the other 12 members of his family.

“If somehow I get infected the entire family will be at risk of getting infection easily as we have a large family living in a single compound”.

The rapid spread of Covid-19 is giving a new rise to social taboos in Pakistan, experts say. One such false belief is that the virus can be caught from the bodies of those who have died from it.

The WHO says current research has found the virus can be only contracted through “respiratory droplets, by direct contact with infected persons, or by contact with contaminated objects and surfaces”.

“Due to the lack of awareness people think they are more likely to contract the disease from dead bodies than from the alive Covid-19 patients,” said Khizar Hayat, Chairman of the Punjab Young Doctors Association.

“The reason is the strict burial procedures and government should aware people that with precautions the disease cannot not spread.”

The panic and social stigma has led to some refusing to receive the dead bodies of family members from hospitals. Instead, medical teams are sent to bury them.

“Now that the number of Covid-19 cases has been increasing sharply, it's hitting closer to home for most people,” said Dr Uzma Ambareen, a consultant psychiatrist and vice president of the Pakistan Association for Mental Health.

“People had been afraid of Covid being falsely diagnosed in their relatives who were hospitalised for some other illness, and in case of their death, not being allowed to receive the body for burial.”

Dr Ambareen said she believes many people in Pakistan were in denial about the disease, which has infected over eight million people worldwide, leaving them “ill-equipped” to deal with it.

“Conspiracy theories have been rife, and people continue to be doubtful of the reasons behind the forced lockdown,” Dr Ambareen said.

“Another important reason was the mixed messages received from various people in power, who caused more confusion and doubt. A third reason has been the actual information related to the virus, which keeps getting modified, as scientists around the world keep discovering and reporting new facts, through research”.

Police in various parts of Pakistan’s largest province, Punjab, report family members abandoning the bodies of coronavirus victims, leaving them unclaimed in hospitals. Although a handful of cases of abandonment have been confirmed, police say they are likely many more across the country.

“The way people are abandoning their parents is quite disturbing for me and we are heading towards social and moral disaster,” said Zahid Islam, a police official who participated in the burial of two abandoned dead bodies told The National.

On June 6, in the Punjab’s Sialkot city police service was called when the body of Arslan Ahmed, who died from the virus at home, was abandoned by his family. Local residents called rescue workers and police, who collected and later buried the body.

There is no legal punishment for abandoning bodies.

A coronavirus patient from the village of northern Punjab told The National he had not disclosed his test results to his family or wider community for fear of being ostracised.

“The suspicion and stigma with the corona infected patient is mentally disturbing and I hope I will recover soon but I hope I haven’t infected anyone else,” he said.

“Even after full recovery there are risks of social stigma from the people among the neighbourhood and wider community”.

UNICEF has issued a set of guidelines for addressing social stigma associated with the pandemic and intended to support governments and media.

Mental health experts say that politicians and celebrities who have publicly announced their infection with the virus may help to ease the stigma.

A survey conducted in Hong Kong in 2003 several years after SARS outbreak, another form of corona virus which caused almost 800 deaths revealed that a small group of the population still stigmatise people who contracted the virus.

These were the details of the news Pakistan's coronavirus victims abandoned in death as relatives fear infection for this day. We hope that we have succeeded by giving you the full details and information. To follow all our news, you can subscribe to the alerts system or to one of our different systems to provide you with all that is new.

PREV How many femicides in Turkey are covered up as suicides?
NEXT ICC prosecutor to probe war crimes in Palestinian Territories, angering Israel