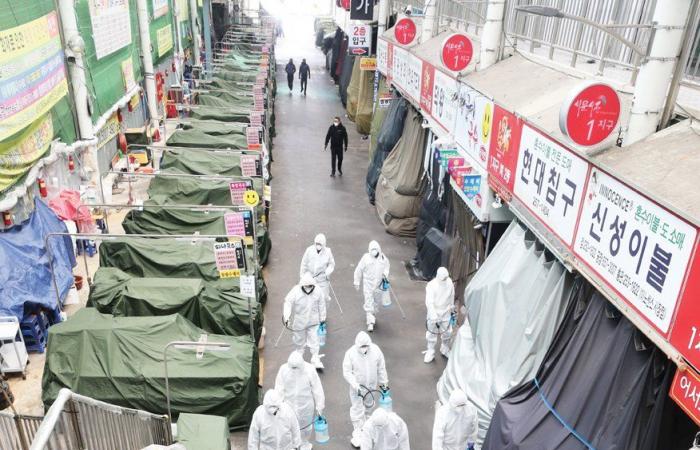 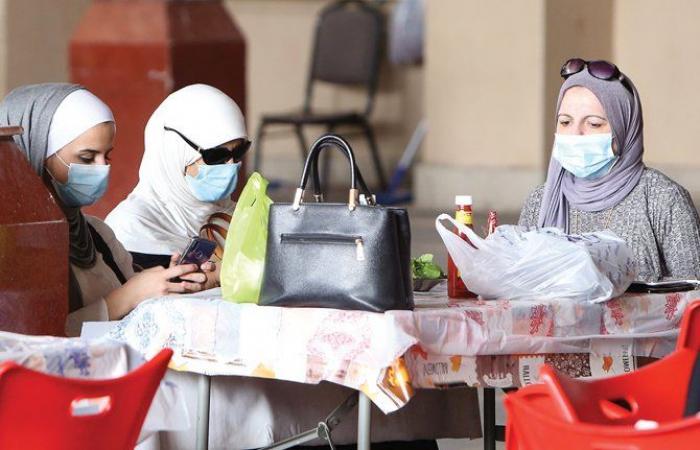 Thank you for reading the news about Coronavirus: A testing time for Asia and now with the details

Jeddah - Yasmine El Tohamy - Health fears are rising across the Middle East after Bahrain, Kuwait, Oman and Iraq reported their first cases of the coronavirus earlier this week following a nationwide outbreak in Iran.

The Iranian government has vowed to be transparent after being accused of covering up the deadliest outbreak of the virus (known as Covid-19) outside China, confirming 139 cases of the infection and a death toll of 19 people to date.

Infected Iranian travelers across the Middle East have also been identified as carriers of the coronavirus, leading many Arab states to close their borders to Iran in addition to China and South Korea.

Several European countries have announced their first cases, including Austria, Croatia and Switzerland, after an outbreak in Italy was announced earlier this week.

Overall, Covid-19, which originated in Wuhan, China, has infected more than 81,000 people worldwide in two months, claiming the lives of close to 3,000 people.

The following are stories from around Asia as efforts to contain the coronavirus threat continue.

Malaysia and Singapore are fighting fake news both on and offline, following the global spread of Covid-19 which first emerged in China in January this year, officials told Arab News.

“A number of citizen journalists and the media reported stockpiling to the point where aisles of rice or staples and even paper products such as toilet paper were wiped off the shelves at supermarkets,” said Ho.

Xenophobia against Asians and the Chinese community has also increased online, including in Malaysia and Singapore, prompting both governments to invoke laws against such activities. Since last month, Malaysian authorities have arrested 12 people and Singapore has detained four individuals for alleged hate-related incidents.

In a bid to deflate the online “infodemic,” the two neighbors have also released pamphlets in four languages — English, Malay, Mandarin and Tamil — while the Singapore government launched a catchy rap song asking people to maintain hygiene.

Dr. Ian Chong, associate professor of political science at the National University of Singapore, told Arab News that both governments were trying to keep their populations calm but he criticized authorities for not acting sooner.

“In Singapore, earlier public messaging about what to do at different alert levels might have helped reduce some of the panic buying, hoarding, and profiteering that came after the (Prime Minister) Lee (Hsien Loong) administration raised health alert levels,” said Chong.

Afghanistan has banned all travel to and from Iran after officials reported on Sunday that three Afghans who had recently returned from the country could be suspected carriers of the coronavirus.

Blood samples of the three elderly men, now in hospital in the western city of Herat, which borders Iran, have been sent to Kabul for tests, Waheed Mayar, head of foreign relations for the Ministry of Public Health told Arab News.

“We do not know how long it will take to find out if they really have coronavirus or not. They were tested at the border and it could be the virus, or any other illness related to cold weather,” he said.

The development adds to the vulnerabilities faced by Afghanistan with its close proximity to China. Mayar said the government had set up health checks at all airports and border crossings with Iran and Pakistan, China’s other neighbor and main trading partner.

“These teams are screening those people who have had exit visas from China dating to one month back. All their details are recorded, and our teams are in contact with them to check if there is any possible sign of the virus on them,” he added.

Khan Jan Alokozai, deputy head of Afghanistan’s Chambers of Commerce said Kabul had halted all of its imports from China.

“It (coronavirus) has also affected business, imports and exports to and from China for us too. Each week, we used to dispatch by air 40 tons of goods, pine nuts mostly, but that has come to a halt,” he added.

Fearing a radical slowdown in the country’s manufacturing sectors, India’s premier industry body the Confederation of Indian Industry (CII) has urged the government to set up a special taskforce to deal with the impact of coronavirus on imports from China.

Two of the CII’s key demands include the “lowering of import duty” in addition to the provision of “easy credit to manufacturers.”

The CII serves as a reference point for Indian industry and the international business community, with more than 9,000 members representing both small- and large-scale industries and 300,000 indirect members from the country.

“The coronavirus pandemic in China is impacting critical inputs for the Indian industry which may adversely impact small businesses. A joint government-industry taskforce can institute risk mitigation measures on an immediate basis,” said Chandrajit Banerjee, the CII’s director general.

“There is no call for panic as Indian industry is resilient and can enhance domestic production to meet temporary shortfalls,” he added.

According to the CII, China supplies 43 percent of India’s imports of the top 20 goods, including mobile handsets ($7.2 billion imported from China), computers ($3 billion), integrated circuits and other inputs ($7.5 billion), fertilizers ($1.5 billion), API ($1.4 billion), and antibiotics ($1.1 billion).

The CII stated in its report that “the pharma sector is particularly vulnerable as it (the outbreak) is a matter of health of Indian citizens.”

Sudarshan Jain, of the Indian Pharmaceutical Association, told Arab News: “We need to be cautious and not create unnecessary speculation in the market.”

Another sector hit has been the toy industry. With only 30 percent of inventory left, there has been a spike in toy prices in recent days.

“The next supply is expected in April end or May first week. Until then, we will have to live with a supply constraint,” said Vipin Nijhawan of the Toy Association of India.

As one of Asia’s top tourist destinations still free from coronavirus, officials in Sri Lanka said that they had embarked on a chain of preventive measures to maintain the island nation’s status quo and keep the disease off its shores.

Dr. Sudath Samaraweera, chief epidemiologist at the Infectious Diseases Hospital in Colombo, told Arab News that from the time the World Health Organization had declared a global emergency, Sri Lankan authorities had been on red alert and were vigilantly monitoring all airports and entry points.

To facilitate the process, the government had put a stop on all online and on-arrival visas for tourists from China which topped the list of countries with maximum visitors to Sri Lanka.

Samaraweera added that more than 1,600 people, including students, who had arrived from China and affected areas there, were being monitored by public health inspectors throughout the country, and 14 specialized hospitals had been equipped to deal with cases. So far, the hospitals had treated 178 suspected cases, including 47 foreigners.

“There was one Chinese woman from Wuhan, who showed symptoms and she was discharged from the hospital after testing negative. A group of 33 students who were brought into the country by a special charter from Wuhan, are completing nine days of quarantine in an army hospital and will be discharged soon once all is clear,” he added.

Bangladesh has taken all necessary measures to contain the spread of coronavirus in the country, with no confirmed cases reported so far, health officials told Arab News on Sunday.

In addition to beefing up screening procedures at airports, land ports, and seaports, a round-the-clock hotline service and special quarantine units have been installed at all government-run hospitals.

According to officials from the Institute of Epidemiology, Disease Control and Research (IEDCR), 291,126 visitors had been screened for the virus between Jan. 21 and Feb. 23, and 17,253 had been tested in the past 24 hours.

“We are on alert for passengers from Singapore, as it has the second-highest local transmission rate after China,” Dr. A. S. M. Alamgir, chief of the IEDCR coronavirus control room, told Arab News.

Nearly 175 Bangladeshi students are stranded in Yichang, the second-largest city in China’s Hubei province after its capital Wuhan.

“To date, we haven’t seen any symptoms of the virus and are expecting to release them soon,” said Alamgir, who is also the principal scientific officer at the IEDCR.

In the Philippines, President Rodrigo Duterte is keen to promote domestic tourism to help the economy.

While there have been three confirmed cases of Covid-19 infections in the Philippines, none of them were Filipino, with all three reported to be Chinese visitors.

Through a video message posted by the Philippine authorities, Duterte encouraged the public to boost local tourism by visiting the “many wonderful places that the Philippines has to offer.”

“To my fellow Filipinos, I encourage you to travel with me around the Philippines. I assure you that everything is safe in our country,” Duterte said.

“Come with me and be my travel companion. I’ll be traveling around the Philippines,” he added.

He noted that airlines, hotels and resorts had “agreed to lower their rates so that we can be a viable market.”

The Philippines has imposed travel restrictions on visitors from China and its administrative regions of Hong Kong and Macau to prevent the spread of the virus.

The Department of Tourism (DoT) said the coronavirus threat has resulted in foregone revenue for the month of February estimated around 14.8
billion pesos.

These were the details of the news Coronavirus: A testing time for Asia for this day. We hope that we have succeeded by giving you the full details and information. To follow all our news, you can subscribe to the alerts system or to one of our different systems to provide you with all that is new.