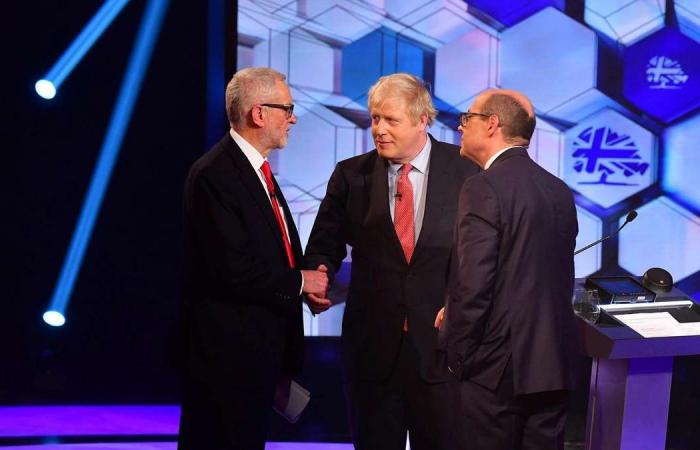 Thank you for your reading and interest in the news Britain Decides: Boris Johnson wins TV debate against Jeremy Corbyn by the slimmest of margins and now with details

Hind Al Soulia - Riyadh - A snap poll following the final leaders’ debate before the UK’s general election has given victory to Prime Minister Boris Johnson by the slimmest of margins.

The YouGov poll of viewers from the BBC debate showed 52 per cent said Mr Johnson had won the debate while 48 per cent said the opposition Labour leader Jeremy Corbyn had won.

As the poll falls within the margin of error it Is essentially a tie. Those who responded they didn’t know who had won were not included in the results.

While the poll has shown there was no definitive winner, Mr Curtis said he believed the lack of a knockout blow against the Conservatives will leave Mr Johnson’s party hoping they can maintain their lead in the polls.

The hour-long debate, which began at 20:30 GMT, was the last time the two politicians will share a stage before British voters go to the polls on December 12.

In his opening statement, first by virtue of a coin toss, Mr Corbyn said Labour would "build a society for all," saying families struggling to make ends meet needed an "ambitious government on their side".

Mr Johnson said the upcoming election would mark a "turning point" for the country and called on voters to "get Brexit done". He touted plans for Conservative spending on the NHS and policing and dismissed the possibility of a Labour-led government as a "nightmare".

After initial questions over criticism both leaders have faced from past prime ministers Tony Blair and Sir John Major, the pair clashed over post-Brexit trade deals.

Mr Corbyn demanded "openness from the government" referring to customs charges and checks in Northern Ireland he claims would come into effect under his opponent's Brexit deal.

The prime minister said the claims were "not true" and said the deal was a "great deal".

Mr Johnson drew first blood, eliciting applause from the audience after accusing the Labour leader of trying to break up the union for decades by supporting the IRA in Northern Ireland.

The audience was, however, equally impressed with Mr Corbyn's defence of the Good Friday Agreement, which he praised as an achievement of a Labour government.

The first displays of humour from Mr Johnson came as the pair sparred over the NHS. The prime minister said Mr Corbyn's accusations the Conservatives planned to offer parts of the NHS up for sale in a trade deal with the United States were "pure Bermuda Triangle stuff". He added: "We'll be hearing about little green men next."

Mr Corbyn stuck to his guns, however, continuing to attack the Conservatives' record on the health service saying Tory cuts had led to "increased waiting times and waiting lists".

During a relatively brief discussion on the economy and business, Mr Corbyn said the worst excesses of capitalism needed to be curbed. Mr Johnson said the government needed to get Brexit done to restore confidence to British business.

The debate then turned to the recent terror attack on London Bridge in which two people, Jack Merritt and Saskia Jones, were killed.

Mr Corbyn called the attack by Usman Khan "totally appalling" but laid the blame for the killings partially at the feet of the government. He said when police numbers were cut and the police service privatised "we all pay a price".

Asked about how he would balance human rights with the need to keep the British public safe, Mr Johnson said he had sympathy for with the families of the victims, who worked to rehabilitate criminals, but he was deeply critical of the judicial automatic early release mechanism which had allowed Khan back into the community. The prime minister said he had consistently campaigned against shorter sentences and early release for terrorists.

Mr Johnson appeared to briefly gain the upper hand against Mr Corbyn when the pair were quizzed on hatred in the current political discourse, including Islamophobia and anti-Semitism in the Conservative and Labour parties respectively.

The prime minister accused the Labour leader of a "failure to take a stand" on the issue of anti-Semitism and pushed Mr Corbyn on to the back foot.

Mr Corbyn's response that he would never make "racist remarks" about people from another country, a reference to the kind of language used by the prime minister in his newspaper columns, did not land quite as effectively.

As the discussion moved on to Brexit once more, Mr Johnson goaded his opposition rival, asking what his Brexit plan was and breaking his opponent's flow.

In his closing statement, the Labour leader appealed to voters' sense of hope and ambition while the prime minister asked for a vote of confidence to get Brexit done.

Online, supporters of both Mr Corbyn and Mr Johnson gave their own early verdicts on the contest. Labour's John McDonnell tweeted: "Johnson's absolutely floundering. Comes across as the liar he is. I said very clearly that we will aim to reduce the working week to 32 hours over the next decade as we increase the productivity of the economy & only as a result of the productivity increase. You are a liar Johnson''

Tory Party chairman James Cleverly tweeted: "What businesses tell me is that they are horrified at the prospect of a Corbyn led Labour government."

The Scottish National Party, which was not represented in the debate, poured scorn on both sides. "That was utterly woeful. Two uninspiring men, both of them unsuited to be PM. On Thursday, a vote for @theSNP can lock Johnson and the Tories out of government," Scottish First Minister and SNP leader Nicola Sturgeon tweeted.

In response, Mr Johnson has said he is “sad” that the former prime minister had intervened and said he “respectfully” disagrees with him.

Mr Major said his plea was for party loyalists to abandon the system's tribal ties in the wider national interest.

“To vote means to choose. Tribal loyalty has its place. But sometimes you need to vote with your head not your heart.”

“This election is beyond surreal.”

Mr Blair went on to warn there were six days to “save” the country.

The two prime ministers address a crowded theatre in central London which was filled with cheers as Mr Major introduced Mr Blair.

Dubbed by an organiser as the last chance saloon for those that want to overturn the 2016 referendum to leave the EU campaigners, the rally in central London on Friday was billed as a wake-up cry against a double-digit poll victory by Boris Johnson.

“With Boris Johnson in power, it won’t just be bad but dangerous,” said Isi Daley, a Brexit campaigner.

“On the 12th of December we all of us can stop him. It means looking at the seat you're in and voting for the party, which ever party, that is best placed to beat the Conservative candidate.”

David Gauke, a cabinet minister under former prime minister Theresa May, called on the half of the country that supports remaining in the EU to stop a Conservative victory at the general election.

Mr Gauke repudiated the idea that Brexit could be made to work.

“I am one of those who tried to make Brexit work or at least mitigate the effects of Brexit,” he said. "There is no doubt about it -- this countries interests require us to remain but this debate will be practically over if, in a weeks time, Boris Johnson wins a majority.”

Speaking to London’s LBC radio programme on Thursday, British election guru Sir John Curtice said that absent a much strong Remain tactical vote it was likely the Conservatives will get a majority in the upcoming election.

Research done by The Times newspaper has indicated Scotland may hold the keys to unlocking a Conservative majority in the upcoming election.

Mr Johnson repeatedly called for a general election after becoming prime minister in July. He said winning a Conservative majority in parliament was the only way to deliver on the decision of the 2016 referendum.

These were the details of the news Britain Decides: Boris Johnson wins TV debate against Jeremy Corbyn by the slimmest of margins for this day. We hope that we have succeeded by giving you the full details and information. To follow all our news, you can subscribe to the alerts system or to one of our different systems to provide you with all that is new.