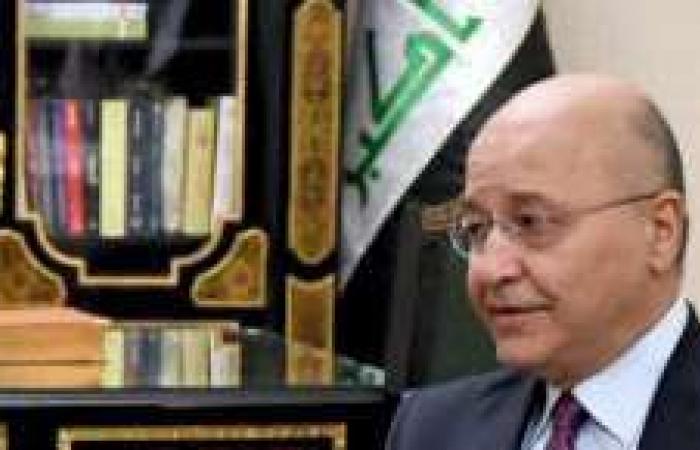 Pictures circulated on social media showed the reflection of a man thought to be Mohammed Al Hashimi in the glass door of a cabinet behind Mr Salih as he presented Mr Allawi with the decree designating him as prime minister.

Mr Al Hashimi, widely known as Abu Jihad, was key member of outgoing prime minister Adel Abdul Mahdi's office. His presence at the meeting would anger anti-government protesters whose demands include an end to foreign interference in Iraqi politics.

But Iraqi sources told The National that the man in the reflection was definitely not Mr Al Hashemi.

“Various sources in the president’s office have confirmed that Abu Jihad Al Hashimi did not attend the meeting,” said a security official.

“It is a reflection of the president’s photographer, Rasheed Abbas, who is well known,” the official said.

He said the rumours were sparked by similarities in appearance between the two men.

A member of parliament with close ties to the president's office also denied that Mr Al Hashemi was at the meeting.

"The person whose reflection appears in the book cabinet behind President Barham Salih is not Abu Jihad Al Hashimi as has been reported by so many people," said Farhad Alaaldin, head of the Iraqi Advisory Council and a former political adviser to Mr Salih and the previous president, Fuad Masum.

"It is amazing how much speculation and conclusions have been reached on a shadow reflection," Mr Alaaldin said.

Who is Abu Jihad?

Mr Al Hashimi was chief of staff in the prime minister's office when Mr Abdul Mahdi held the post.

According to various media reports, he was the main driver behind Mr Abdul Mahdi’s decisions during his time as premier.

Like Mr Abdul Mahdi, Mr Al Hashimi was a member of the Supreme Islamic Council, an Iraqi opposition formed in Tehran in 1980s to oppose Saddam Hussein's dictatorship.

The Badr Brigade split with the Council in 2003 and transformed into a political party, the Badr Organisation, that is currently headed by Hadi Al Amiri.

Mr Al Hashimi is also known to have links with Iran's Quds Force, the overseas operations arm of the Islamic Revolutionary Guard Corps.

What's next for Iraq?

Mr Allawi has will have one month to form a new government following his nomination, which ended two months of political deadlock since Mr Abdul Mahdi resigned in November.

In Iraq, cabinets are typically formed after complex horse-trading in which parties divide up lucrative and influential ministerial posts based on their strength in parliament. Cabinet appointments have to be approved by parliament.

Mr Abdul Mahdi resigned amid mass protests in Baghdad and southern Iraq to demand the removal of the country's political elite. Protesters have also rejected Mr Allawi's nomination, saying they consider the former communications minister a part of the establishment.

These were the details of the news Iraqi officials deny rumours about 'Iran's man in Baghdad' for this day. We hope that we have succeeded by giving you the full details and information. To follow all our news, you can subscribe to the alerts system or to one of our different systems to provide you with all that is new.