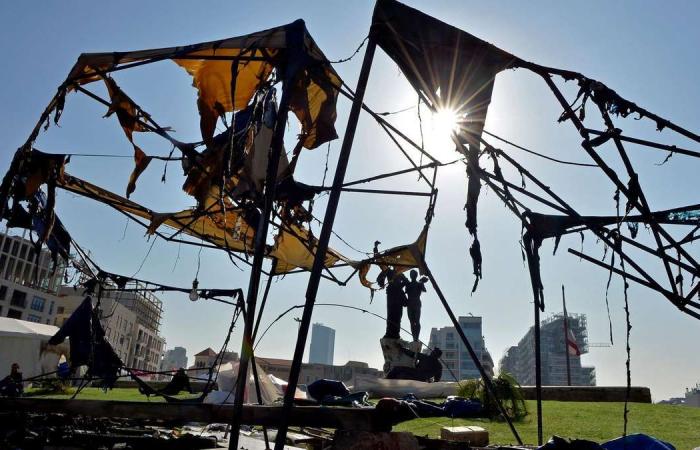 The parliamentary consultations, designed to choose a new premier, have already been pushed back a week, but the Lebanese Presidency tweeted Monday morning that it would be delayed by four days as per the wishes of caretaker Prime Minister Saad Hariri, without further explanations.

The country has been without a government since Mr Hariri resigned on October 29 under pressure from nation-wide street protests demanding a new government of specialists and better state services. Protesters deem the Lebanese political class too corrupt to enact necessary reform to save the country’s collapsing economy.

But protests, which had remained largely peaceful up to now, turned violent in Beirut over the last two days.

The riot police’s harsh crackdown against a small crowd of protesters Saturday night near Parliament in Beirut galvanised the Lebanese, who returned to the streets in their thousands the following evening, chanting slogans like “the revolution will continue” and hurling insults at politicians.

Many came prepared for teargas, with gas masks, helmets and goggles.

For about an hour, protesters threw fireworks and water bottles at riot police who were stationed in front of a street leading to Nejmeh Square, an area of the city centre that includes Parliament which has long been cordoned off.

Street fights continued until the early hours of the morning, with riot police using rubber bullets and water cannons to clear the streets. By the late evening, a tent that had been set up by protesters in Martyr’s Square had been burnt down. The identity of those responsible remains unclear.

In a statement on Monday, the civil defence service said that it had treated 126 injured people in downtown Beirut and transferred 56 more to hospital.

Lebanese media and some protesters blamed “infiltrators” for the increase in violence. Since the anti-government movement began, supporters of Hezbollah’s ally party Amal have attacked protesters and riot police. But the party has denied any involvement and none of the men have been detained.

Videos on social media allegedly show protesters violently fighting with Amal supporters for the first time. Up to now, they have retreated when assaulted.

Incredible scenes in downtown #Beirut as protesters fight supporters of Speaker Nabih Berri in the street.

Peaceful protesters have been repeatedly attacked by them. Today, they ran towards them and confronted them. #LebanonProtests #لبنان_يتنفض https://t.co/tQY1AEtPzA

“Tripolitans shake the ground”, chanted the men, indicating that they were from the Sunni Muslim dominated city in the North of Lebanon, which has emerged as a hub for protests. They also used profane language against Amal leader Nabih Berri.

Lebanese political analyst Imad Salamey told The National that delays in parliamentary consultations are probably due to divisions among the political elite about how to respond to protesters’ demands.

“Hariri is trying to reverse the electoral outcomes obtained in 2018 [which resulted in the weakening of his party, the Future Movement] to suit his political ambitions, while attempting to show that he is responding to protesters’ demands by heading a government of specialists,” he said.

In a tweet on Monday, United Nations Special Co-ordinator for Lebanon Jan Kubis said the postponement was "either a sign that following the events and statements of the last days politicians start to understand that they cannot neglect the voice of the people, or another attempt to buy time for business as usual."

In a country where power-sharing is divided among the country’s many sects, there are few alternatives to Mr Hariri being nominated as Prime Minister once again, as he is the strongest representative of the local Sunni Muslim community, said Mr Salamey. Several candidates to his succession withdrew their candidacies in the past weeks.

“Should Mr Hariri not be nominated, Lebanon would drift towards sectarian imbalance that would most probably lead to strong Sunni grievances, as it remains plausible that the president, who is the strongest Maronite Christian representative, and the Parliament speaker, who is Shiite Muslim, would remain in power,” observed Mr Salamey.

He warned that “violence will escalate if politicians try to impose their usual backdoor arrangements."

These were the details of the news Lebanese Parliamentary consultations pushed back again as protests become more violent for this day. We hope that we have succeeded by giving you the full details and information. To follow all our news, you can subscribe to the alerts system or to one of our different systems to provide you with all that is new.