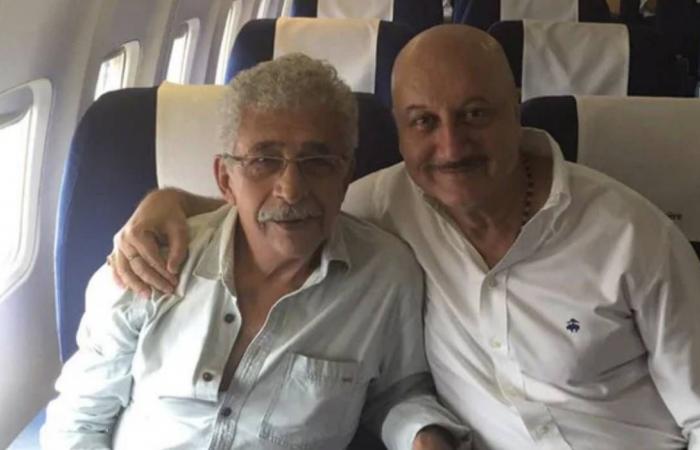 Aden - Yasmine El Tohamy - Actor Naseeruddin Shah called his industry colleague Anupam Kher a 'clown' earlier on Wednesday, and now the latter has responded to the jibe saying Shah is a "frustrated" man despite of all the acclaim he has won.

In an interview with The Wire earlier in the day, Shah opened up about the protests against the Citizenship (Amendment) Act and said his fellow actor Kher, who has been "very vocal" in his support to Bharatiya Janata Party (BJP) and its policies, is a clown.

Responding to his "A Wednesday" co-star, Kher took to his Twitter to share a video message for him, attributing him as "Jenaab Nasseruddin Shah Saab".

"I saw the interview you gave about me. Thank you. I would like to inform you that I never take your remarks seriously. Even though I have never bad-mouthed about you. But now I will say - you have spent your entire life (even after achieving success) in frustration. If you can criticise Dilip Kumar, Amitabh Bachchan, Shah Rukh Khan, Rajesh Khanna, Virat Kohli... then I am sure, I am in great company," Anupam said in the video.

"These celebrities have never replied to your statements and no one has taken your statement seriously because we all know that this is not you... but the external substance you have consumed since years... and that is why you can't differentiate between what is right and what is wrong. If by saying bad about me gives you the publicity for 2-3 days, then I wish you this happiness. May god bless you. And do you know what is in my blood? Hindustan. Do understand this," he added.

In an interview with The Wire, Naseeruddin talked about the protests against the CAA, about many Bollywood stars keeping mum over the issue, and also about the student protests and actress Deepika Padukone's show of solidarity at Jawaharlal Nehru University (JNU), reports hindustantimes.com.

Asked if speaking against the ruling party or voicing opinion could harm actors or the film they are associated with, Shah said actors usually think only of themselves. "Otherwise there'd be more parity. But that's a story for another day," he said.

On Anupam, Shah said: "Someone like Anupam Kher has been very vocal. I don't think he needs to be taken seriously. He's a clown. Any number of his contemporaries from NFD and FTII can attest to his sycophantic nature. It's in his blood, he can't help it."

These were the details of the news India News - Veteran actor Anupam Kher responds to Naseeruddin Shah's 'clown' jibe for this day. We hope that we have succeeded by giving you the full details and information. To follow all our news, you can subscribe to the alerts system or to one of our different systems to provide you with all that is new.

NEXT West should do more to unblock Ukraine’s ports, official says