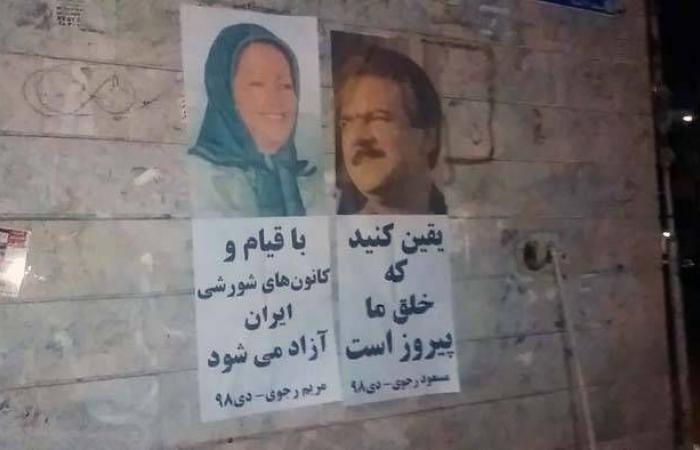 We show you our most important and recent visitors news details Iran public welcomes Soleimani’s death: NCRI in the following article

Hind Al Soulia - Riyadh - TEHRAN — On Friday and Saturday, subsequent to the elimination of the notorious Islamic Revolutionary Guard Corps’ (IRGC) Quds Force commander Qasem Soleimani by an unprecedented US drone attack in Baghdad, Resistance units posted banners carrying pictures and messages of Mrs. Maryam Rajavi, the president-elect of the National Council of Resistance of Iran (NCRI), and Massoud Rajavi, the leader of the Iranian Resistance, in Tehran and other cities, including Mashhad, Tabriz, Karaj, Hamedan and Khorassan Razavi Province.

Early Friday, a volley of missiles hit Baghdad's international airport, striking a convoy belonging to the Hashed Al-Shaabi, an Iraqi force with close ties to Iran. The Hashed confirmed that both Soleimani and its deputy chief Abu Mahdi Al-Muhandis were killed in what it said was a "US strike."

The banners read: “Soleimani’s elimination expedites regime’s overthrow,” “The Iranian people and Resistance have pledged to overthrow this regime,” “Rest assured that our nation will triumph,” “Iran will be free through the uprising and Resistance units,” “Bassij and IRGC centers must be demolished,” “The rebellion continues,” and “Flowers have blossomed from the blood of the martyrs.” — SG

These were the details of the news Iran public welcomes Soleimani’s death: NCRI for this day. We hope that we have succeeded by giving you the full details and information. To follow all our news, you can subscribe to the alerts system or to one of our different systems to provide you with all that is new.