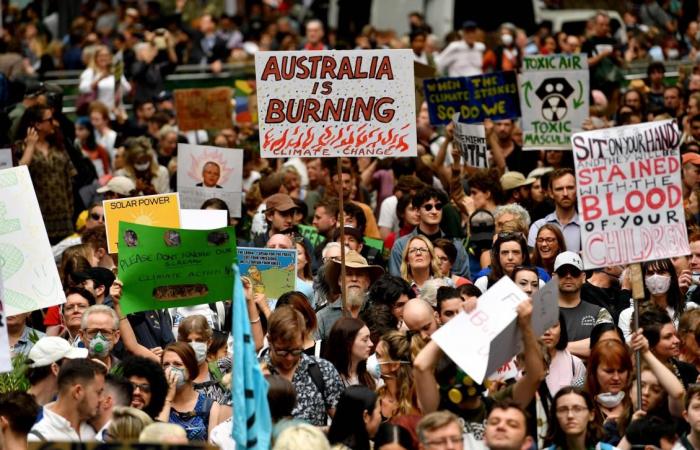 On Tuesday smoke alarms rang out across Australia’s biggest city, with thick haze triggering smoke alarms and forcing buildings to be evacuated, school children to be kept indoors, and ferries to be canceled.

Many of the protesters voiced anger at the government’s silence in the face of the crisis.

“The country is on fire” said 26-year-old Samuel Wilkie attending his first climate protest. He described politicians’ response as “pathetic.”

“Our government is not doing anything about it,” said 29-year-old landscape gardener Zara Zoe. “No one is listening, no one is doing anything.”
Prime Minister Scott Morrison — a staunch backer of Australia’s vast coal industry — has said little about the smoke since the crisis began, preferring to focus on fire-hit rural communities.

Organizer Chloe Rafferty said that had created anger at the conservative government’s inaction.

Smoke from bushfires is one of the biggest contributors to air pollution in Australia, releasing fine particles that can lodge deep within people’s lungs and cause
“severe” health impacts over time, according to scientist Mick Meyer from government-funded scientific research agency CSIRO.

These were the details of the news Australians protest as bushfire haze sparks health fears for this day. We hope that we have succeeded by giving you the full details and information. To follow all our news, you can subscribe to the alerts system or to one of our different systems to provide you with all that is new.