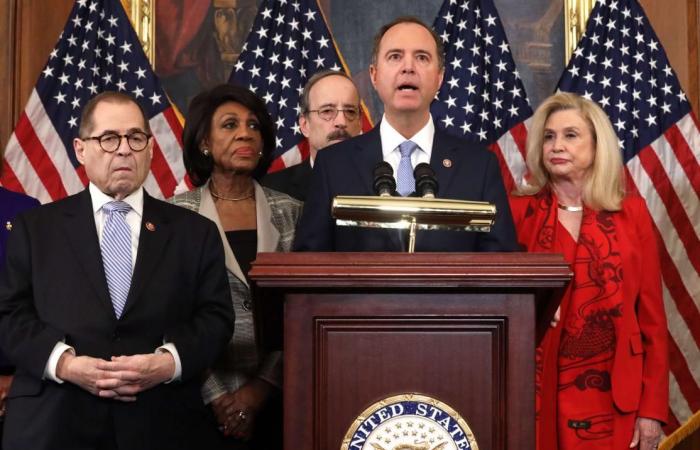 Jeddah - Yasmine El Tohamy - WASHINGTON: Democrats unveiled two articles of impeachment Tuesday against US President Donald Trump after weeks of arguing there is overwhelming evidence that the US leader abused his office and deserves to be removed.
If the charges -- abuse of power and obstruction of Congress -- are approved by the full House of Representatives in a vote expected next week, it would put Trump in the historic position of being the third US leader ever impeached and placed on trial in the Senate.
"Our president holds the ultimate public trust," said House Judiciary Committee Jerry Nadler.
"When he betrays that trust and puts himself before country, he endangers the constitution, he endangers our democracy and he endangers our national security."
Nadler, in a solemn and deeply serious moment for the nation, was joined by House Speaker Nancy Pelosi in the US Capitol to lay out the charges facing Trump.
The president is alleged to have wielded the power of the presidency for personal and political gain by pressuring Ukraine to interfere in the 2020 US election.
His accusers say he conditioned vital military aid and a much-sought White House meeting on Kiev announcing it would investigate Democratic former vice president Joe Biden, who is the frontrunner to challenge Trump in the 2020 election.
He also pressed his Ukrainian counterpart Volodymyr Zelensky to probe a debunked Kremlin conspiracy theory that it was Kiev, and not Moscow, that interfered in the 2016 US election.
The charges also focus on Trump's efforts to block Congress from fully investigating his actions -- which Democrats see as a violation of its constitutional right to conduct oversight of the executive branch.
"The evidence of the president's misconduct is overwhelming and uncontested," said House Intelligence Committee chairman Adam Schiff, who oversaw weeks of public hearings in which witnesses including Trump administration officials and US diplomats testified about the pressure on Ukraine.
"To do nothing would make ourselves complicit in the president's abuse of his high office," Schiff said, adding that Trump's "misconduct goes to the heart of whether we can conduct a free and fair election in 2020."
Trump, who has long assailed the Democrats for pursuing impeachment, maintained his fighting posture early Tuesday, tweeting that the effort to oust him as "sheer Political Madness!"
Democrats on Monday laid out their case for ouster with a nearly 10-hour public hearing in which they declared Trump a "clear and present danger" to national security.
It is widely understood that Democrats were debating whether to unveil a third article of impeachment -- obstruction of justice -- against Trump, but concluded it would be better to keep the charges narrowly focused on Trump's Ukraine pressure effort.
Should Trump be impeached, as expected, he faces a weeks-long trial in January in the US Senate, which is controlled by members of his Republican Party.
Removal from office is unlikely, given that conviction requires a two-thirds vote in the 100-member chamber, and no Republicans have yet signaled they would side with Democrats against the president.

These were the details of the news Democrats announce two impeachment charges against Trump for this day. We hope that we have succeeded by giving you the full details and information. To follow all our news, you can subscribe to the alerts system or to one of our different systems to provide you with all that is new.