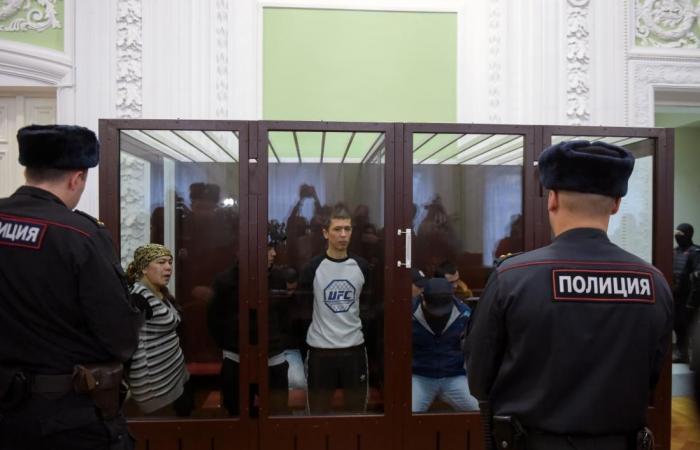 Jeddah - Yasmine El Tohamy - SAINT PETERSBURG: A Russian court on Tuesday sentenced 11 people to terms including life in prison after finding them guilty of a deadly bomb attack on the Saint Petersburg metro in 2017.
Abror Azimov, a 29-year-old from Kyrgyzstan, was sentenced by a military court in Russia’s second biggest city to life in prison for organizing and participating in a terrorist group.
Ten other people who are also from Central Asia were sentenced to between 19 and 28 years in prison.
All had denied the charges, and said they were tortured.
Shokhista Karimova, 48, pounded the glass of the courtroom cage and cried “let me go” after she was handed a 20-year term.
The bomb blast in April 2017 killed 15 people in the Saint Petersburg metro and wounded dozens more.
The alleged perpetrator, Akbarjon Djalilov, a 22-year-old from Kyrgyzstan, died in the attack.
Ten of the defendants were accused of acting as accomplices, notably by providing Djalilov with explosives and false documents.
The charges ranged from organizing a terrorist group and perpetrating an “act of terror” to weapons trafficking and making explosive devices.
Critics of the case say the defendants’ connection to the attack was not proven and some claimed they were framed by Russia’s FSB security service.
The suspects had been arrested in different Russian cities and detained in Moscow before being transferred to Saint Petersburg for the trial.
The prosecution said the defendants formed two “terrorist cells” in Moscow and Saint Petersburg and helped Djalilov by wiring him money and providing the explosives.
Defense lawyers and prison monitors have pointed to numerous irregularities in the case however and claim that evidence was planted.
One defendant claimed he was kidnapped from a hospital in Kyrgyzstan, while another said last month that they had been framed by the FSB after it “missed the terrorist.”
The bombing was claimed by an obscure group, the Imam Shamil Battalion, which experts say is linked to Al-Qaeda.

These were the details of the news Russian court sentences 11 for Saint Petersburg bombing for this day. We hope that we have succeeded by giving you the full details and information. To follow all our news, you can subscribe to the alerts system or to one of our different systems to provide you with all that is new.