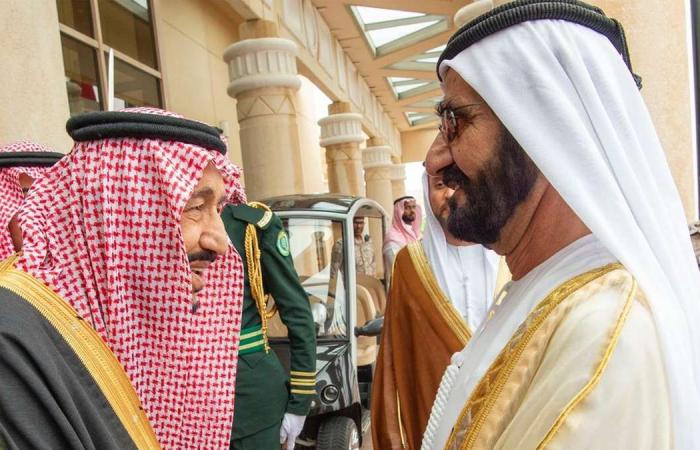 Hind Al Soulia - Riyadh - Sheikh Mohammed bin Rashid, Vice President and Ruler of Dubai was met by Saudi King Salman as he arrived in Riyadh for the 40th GCC summit on Tuesday.

The UAE delegation is headed by Sheikh Mohammed, who will attend the meeting with with ministers to discuss issues such as regional security, Iran and the Palestinian conflict.

The GCC states – Bahrain, Kuwait, Oman, Saudi Arabia, the UAE and Qatar – come together every year to discuss trade and security co-operation. This year the summit will be held in Riyadh's Al Daraya Palace.

Delegations from Oman and Qatar arrived to the Saudi capital prior to the UAE, with Bahraini and Kuwaiti officials following after. All delegations were greeted by King Salman.

The Qatari delegation is led by Prime Minister Sheikh Abdullah Bin Nasser Al Thani, who held talks with King Salman prior to the talks as part of the summit’s protocol.

Qatar's Emir Tamim Al Thani will not attend this year's summit, Saudi officials confirmed to The National, dashing hopes of a solution to a dispute which included three GCC members – Saudi Arabia, the UAE and Bahrain – cutting ties with Doha in 2017.

The three countries accuse Qatar of interfering in their internal affairs and supporting extremist groups across the region.

“There is a Gulf consensus that Nayef Al Hajraf will become the next secretary general," Mr Jarallah said late Monday.

If Mr Hajraf is chosen, he is expected to assume the post by April 2020, a GCC official confirmed to The National.

The heads of state are expected to discuss his official nomination on Tuesday.

If he takes the post, Mr Al Hajraf will become the second Kuwaiti to become the GCC’s secretary general since its establishment in 1981.

These were the details of the news UAE delegation arrives in Riyadh for GCC summit for this day. We hope that we have succeeded by giving you the full details and information. To follow all our news, you can subscribe to the alerts system or to one of our different systems to provide you with all that is new.