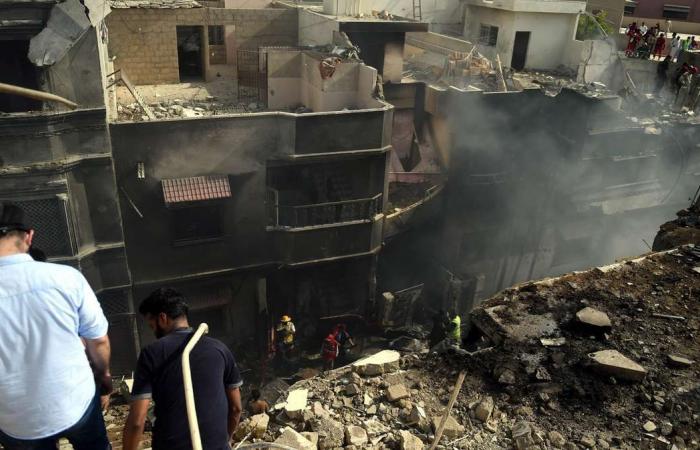 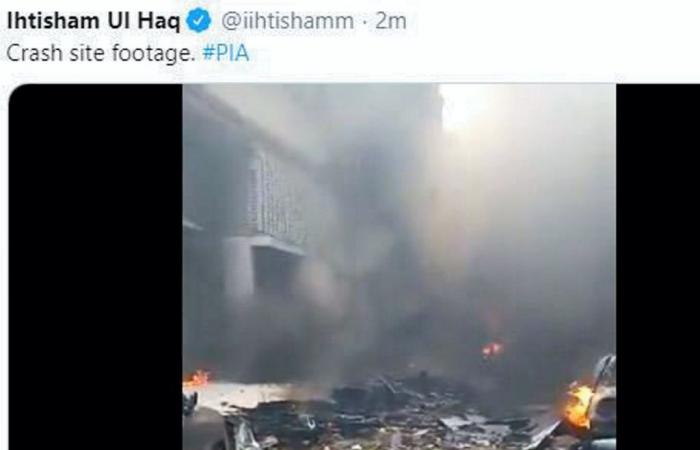 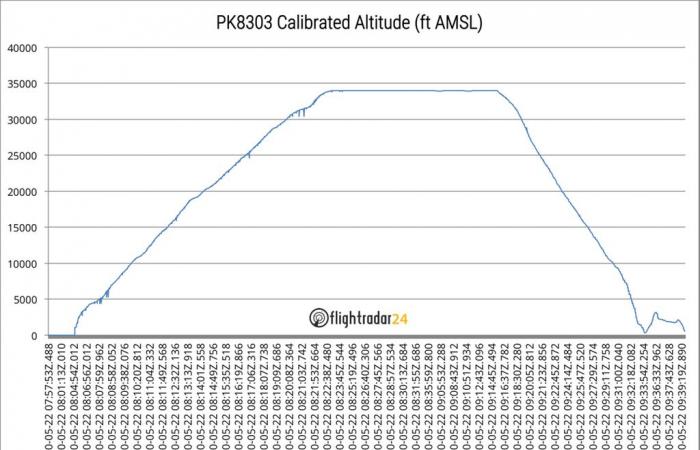 The airline said there were 91 passengers and eight crew on board flight PK 8303 from Lahore to Karachi. Pakistan's Civil Aviation Authority had initially said there were 107 people on board.

The number of casualties, including among people on the ground, was not immediately clear but officials said at least two passengers survived while dozens of bodies were taken to local hospitals.

Footage showed plumes of smoke rising from the site of the crash and people running from the scene screaming. Ambulances and rescue officials arrived at the scene to help residents soon after the plane went down at 2.45pm local time.

At least five houses have reportedly been hit in the heavily populated Model Colony area where the plane crashed, about three kilometres north-east of Jinnah International Airport.

The civil aviation authority said the pilot called in a mayday warning that he had lost an engine as the plane attempted to land.

“The last we heard from the pilot was that he has some technical problem,” PIA spokesman Abdullah H Khan said in a video statement. “It is a very tragic incident."

A senior civil aviation official told Reuters it appeared the plane was unable to open its wheels due to a technical fault prior to landing, but it was too early to determine the cause.

An emergency was declared at Jinnah International Airport and government hospitals.

Seemin Jamali, a director from Jinnah Post Graduate Medical College in Karachi, said eight dead and 15 injured people had been taken there.

"They were all from the ground, no passengers have been brought here," she said.

Police wearing protective masks struggled to clear away crowds to allow a firetruck and an ambulance to move through the narrow streets toward the crash site, as they cordoned off the area.

The crash comes just days after the country restarted commercial flights following the coronavirus shutdown. Many Pakistanis were travelling home to their families on Friday to celebrate Eid Al Fitr, which marks the end of Ramadan.

Video circulated on social media appeared to show the aircraft flying low over a residential area with flames shooting from one of its engines.

Witnesses said the Airbus A320 appeared to attempt to land two or three times before crashing in the crowded residential area, which is located in a poor part of the city.

Flightradar24 said in a blog post the altitude data "shows a typical climb, cruise, and descent, followed by a go around and at least one additional landing attempt".

A local resident, Abdul Rahman, said he saw the aircraft circle at least three times as though trying to land before it crashed into several houses.

Pakistan's Prime Minister Imran Khan tweeted: “Shocked and saddened by the PIA crash. Immediate inquiry will be instituted. Prayers and condolences go to families of the deceased.”

Pakistan has a poor aviation safety record. In 2010, a plane operated by private airline Airblue crashed near Islamabad and killed all 152 people on board in the deadliest air disaster in Pakistani history.

In 2014, a passenger died when an Airbus A310 flying from Saudi Arabia was hit by bullets as it approached Peshawar in Pakistan.

And in December 2016, all 47 passengers and crew on board a domestic flight from Chitral to Islamabad where killed when the flight crashed on a hillside.

Airbus did not immediately respond to a request for comment on the crash. The flight typically takes an hour and a half from the northeastern city of Lahore, the capital of Pakistan’s most populous province, Punjab, to Karachi.

The plane, an Airbus A320-200, is about 16 years old and was previously owned by China Eastern Airlines. It was withdrawn from use in 2014 and was transferred to PIA in October 2014, according to planespotters.net.

According to data from flight tracking website Flightradar24, the plane (registration AP-BLD) was used yesterday on a repatriation flight between Muscat and Lahore.

Airworthiness documents showed the plane last received a government check on 1 November 2019. PIA’s chief engineer signed a separate certificate on April 28 saying all maintenance had been conducted on the plane and that “the aircraft is fully airworthy and meets all the safety” standards.

These were the details of the news Pakistan International Airlines plane crashes near Karachi airport for this day. We hope that we have succeeded by giving you the full details and information. To follow all our news, you can subscribe to the alerts system or to one of our different systems to provide you with all that is new.