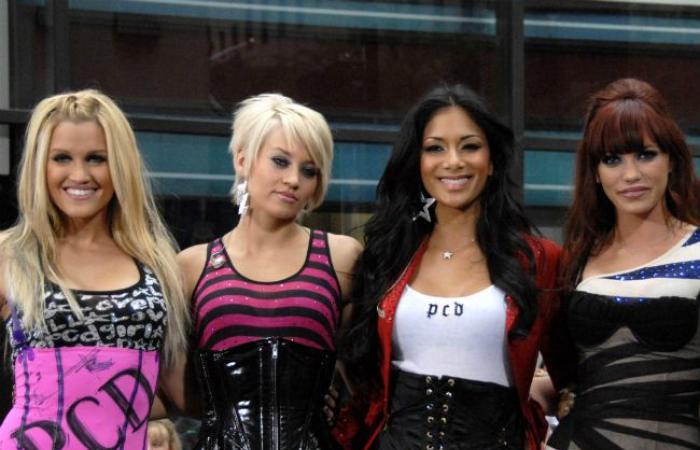 Mohamed Nass - Dubai - Pussycat Dolls have revealed a new album is "in the works".

The 'When I Grow Up' hitmakers debuted a new single 'React' for their recent comeback performance on 'The X Factor: Celebrity' and have promised the track will be followed by even more music next year.

Discussing the possibility of a new album, Jessica Sutta said: "It's all in the works."

Carmit Bachar added: "We have a lot of exciting things in the pipeline."

The 'Buttons' singers will also embark on their 'Unfinished Business' tour in April and have promised fans will be delighted with the show.

Jessica teased to 'Entertainment Tonight': "You're going to get all the elements of the Pussycat Dolls: Water, fire."

Jessica admitted the band - which also includes Nicole Scherzinger, Ashley Roberts and Kimberly Wyatt - were all "so emotional" when they got back together following a 10-year break.

She said: "It was so emotional. We all had tears in our eyes when we first got into the room together again.

"We love this group. We love being together. It's just an amazing experience all around."

Carmit added: "It's been incredible. It's been a whirlwind, for sure. Everybody wanted this to happen, not just fans, but we did and we call it divine timing."

And the pair believe it was important for the band to go their separate ways in order to "flourish and evolve".

Carmit said: "We all had things that we needed to do in our lives and go our separate ways to kind of flourish and evolve and grow as women.

"It feels so good to be back with my girls. It's like a sisterhood. We went through a lot together...We are these women that were ready to come back."

Former Doll Melody Thornton is not involved in the reunion.

These were the details of the news Pussycat Dolls promise new album for this day. We hope that we have succeeded by giving you the full details and information. To follow all our news, you can subscribe to the alerts system or to one of our different systems to provide you with all that is new.