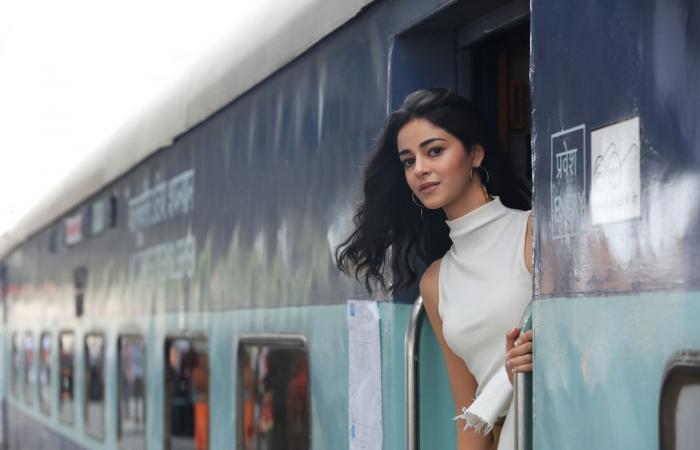 Thank you for reading the news about Ananya promise a fun ride in Pati, Patni Aur Woh and now with the details

Aden - Yasmine El Tohamy - She's a daddy's girl. After all, she inherited some of her dad's (Chunky Pandey) comedic genes. And the vivacious Ananya says this will be evident in her latest rom-com Pati, Patni Aur Woh (Husband, Wife and Mistress), releasing in the UAE this weekend.

The young star is all excited to have stepped into her father's boots in the movie inspired by a 1978 classic of the same name and starring legends such as Sanjeev Kumar, Vidya Sinha and Ranjeeta Kaur. Written originally by prominent poet, novelist and scriptwriter Kamleshwar, the first adaptation of the story was well-liked by the audience as it showcased a taboo subject in an acceptable, comedic fashion, and hopefully, this modern adaptation will also go down well with the audience, says Ananya, who is in her elements as a mistress in this love triangle, a part  she told us, she thoroughly enjoyed playing.

"I'm very excited about the movie. It a highly entertaining film and personally for me, it holds much more value because my dad is known for his comedy and now I'm getting a chance to showcase my funny skills, it can't get better than this," said the bubbly beauty who made her debut in Karan Johar's Student of the Year 2.

Though this version of the movie has been inspired by the original, the storyline has been tweaked to give it a modern spin to suit the viewing tastes of today's audience.

"The makers wanted to take a modern look at relationships. A lot of (youngsters) people will be able to relate to it and find it realistic and universal in appeal."

Considering this is just her second movie, Ananya speaks with much confidence, something that comes with experience, but that was not the case, she reveals, when she first faced the camera and she says she's working hard on that.

"I'm more confident now. But I surely wasn't when I was filming my first movie because before that, I had never seen myself on screen and I was not sure how I would look on a big screen. I was worried what people would say about me, but now I'm more aware of things. I think I have become more confident as an actor and it'll only get better as I do more and more movies."

Her character in Pati, Patni Aur Woh is in stark contrast to her role as a bratty teen in Student of the Year 2. In this instance, she has donned a much more pleasant and sweet persona and plays the mistress's role to the hilt.

"With a title like Pati, Patni Aur Woh, and me playing the role of Woh, a lot of people will expect my character to be a certain way - a vamp or a home-breaker. When I was offered the movie, I was shocked to know that I would be playing the Woh not the Patni, because, in real life, I have a softer and sweeter personality. However, I was happy to know that I was working opposite Bhumi (Pednekar). Moreover, Woh is a very strong woman, she's self-respecting, confident, and a work-oriented girl. But at the same time, she's empathetic. She could be any woman, me as well. The way she behaves and handles tricky situation is interesting to see."

Cues from the original
"Yeah, I did watch the original. My grandma is a huge fan of Sanjeev Kumar's films, so is my mum. At that time, when I was watching the film, I found it to be funny and I thought it should be remade because I found the concept interesting and also relatable. I watched it again after reading my script to see if there were any similarities between the original and our version, but there aren't."

Skills Ananya inherited from her famous father
"I hope I've inherited some of his funny genes. You know, in real life too, he's such a light-hearted and comic person and that side of him reflects on screen, in the characters he portrays. He never takes himself seriously. If you have a carefree attitude it'll reflect on screen when you're doing comedy scenes. And once you're in that space, you're open to a lot more things. For me, these are some of the things I've acquired from him, to be uninhibited and not be afraid to laugh at myself."

Working with Kartik
"We are good friends and have great bonding and chemistry, and this reflects on screen. Whenever he is around, I always feel that I have someone who is looking after me. He is a selfless actor who looks at the full scene rather than just his part, and I think that's an amazing quality to have. We are always laughing and teasing each other, this works for the chemistry as well."

Ananya's views on infidelity and extramarital affairs
"I am not okay with it, I will not tolerate it. If I was ever cheated on, I would just leave. I never want to be the other woman in a relationship. But in general, relationships have changed a lot over time. Ultimately, it depends on the couple and how they want to define it. That's how I view relationships, but playing a character that indulges in such a relationship doesn't mean I subscribe to extramarital affairs."

How Ananya stood up against bullying
"The reason I took up this cause is because of the kind of hatred and trolls that's floating on social media these days. Several friends and colleagues have been affected by this. I felt that no one was doing anything about it so I raised my voice after an incident. Someone was reinterpreting my conversations and claiming that I lied about going to college and stuff like that. The fact that people started believing what was being put out on social media without cross-checking scared me. It's easy for people to spread malicious stories online and that's what spurred me and made me stand up against online bullying."

Love for '90s music
"I'm a big fan of Bollywood music, I'm constantly listening to songs from the '90s. Now I'm also dancing to the iconic '90s song, Ankhiyon Se Goli Maare, from the 1998 movie Dulhe Raja in my film."

Ananya eats until she gets sick on cheat days
"I hate diets, but I like to eat healthy. It's good for my skin and hair. Whenever I'm filming I eat clean, but Sundays are my cheat day and I eat anything and everything on that day - burgers, pasta, pizza, chocolates, anything. The amount I eat on my cheat days makes me sick sometimes! But I do it because throughout the week I'm following a disciplined eating routine, so I reward myself for that on my cheat days. I never get time for workouts, but whenever I get a chance, I indulge in dancing, it's a great form of exercise."

Hrithik is Ananya's dance idol
"I'm in awe of Tiger Shroff, he's an amazing dancer, so disciplined. But my absolute all-time fav has to be Hrithik Roshan. What a graceful dancer, he moves so effortlessly. Among the women, Katrina (Kaif) is my favourite. She's so hot and cool, she gets it right in every single song that she has danced on."

These were the details of the news Bollywood News - Ananya promise a fun ride in Pati, Patni Aur Woh for this day. We hope that we have succeeded by giving you the full details and information. To follow all our news, you can subscribe to the alerts system or to one of our different systems to provide you with all that is new.