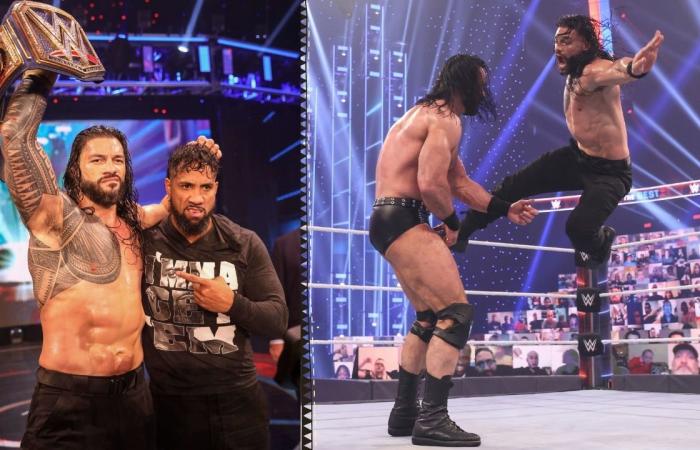 The competition between Raw and SmackDown culminated in a direct duel between Universal Champion Roman Reigns and WWE Champion Drew McIntyre. The match didn’t end fair, but it was the wrestling highlight of this year’s WWE Survivor Series.

Drew McIntyre joined the ranks of WWE’s true Main Event Superstars in 2020. The biggest match at the moment was the Survivor Series 2020 in the Main Event: The Scottish WWE Champion dueled the Universal Champion Roman Reigns – just six days after McIntyre surprisingly won the Randy Orton title on Raw and started his second reign.

McIntyre and Reigns met at eye level. It was the war the Scot had promised on SmackDown Friday. We were only brought to a clear decision. Because Jey Uso still had to make up for his cousin, he intervened in the match. The referee had just fallen from the four of a rope – after a collision with Reigns, who had received Drew’s Claymore Kick!

Reigns was able to deal a low blow to McIntyre, Jey Uso followed with a super kick. Reigns hit with a Superman punch and took McIntyre into his guillotine choke. The resilient McIntyre wanted to free himself, but his strength waned – and a second referee finally declared the “Tribal Chief” the winner.

A hard-fought, must-see match left Drew McIntyre angry. No question, this duel has to be repeated in 2021.

At the end of the evening, Jey Uso was back at the head of the table. He made up for Roman Reigns because Jey and the SmackDown team had failed completely at the beginning of the broadcast from the ThunderDome. Reigns interpreted this as disrespect – to himself and his family. Reigns threatened Jey: “You have to prove yourself now if you want to keep your place at the table!”

In fact, in the men’s elimination match, the entire raw team won against the blue brand. Not a single participant was eliminated on Raw: AJ Styles, Keith Lee, Sheamus, Braun Strowman and Riddle, who hadn’t understood each other beforehand, stayed on track together. It was Jey Uso who was the last man on the SmackDown team to temporarily hold five opponents at bay, but was then finally pinned by Keith Lee after the Spirit Bomb.

LANA IS THE ONLY SURVIVAL

In the women’s elimination match, Raw also prevailed! Lana was – unintentionally – established as Sole Survivor. She had been instructed by Nia Jax to simply stay on the ring stairs and stay out of the match so as not to weaken the teamwork. In the end, only Nia Jax, Shayna Baszler and Lana were left for Raw, while Bianca Belair was on her own for SmackDown.

Nia Jax cleared the commentary desk. But with Bianca Belair this plan didn’t work out. Bianca started a comeback and was finally able to promote Jax over the barrier into the “public area”. Bianca wanted to jump back into the ring. But didn’t make it within the 10 count. Nia Jax and Bianca Belair were both tallied.

Lana widened her eyes: she only became the winner by standing around! In all honesty, nobody looked really good at this finish.

Overall victory at this year’s Survivor Series went to Raw again. WWE didn’t make an issue of that. The direct competition was not discussed during the show, nor were there any fade-ins.

It started with a win for The Miz on the kickoff show. He won a Battle Royal with participants from Raw and SmackDown and in the end was able to throw Dominik Mysterio over the ropes. After Chad Gable was kicked out, Mysterio thought they’d won the match. But Miz had never gone over the ropes and was able to dust off the success at the last second.

The Street Profits claimed a win for SmackDown over The New Day – with a Doomsday blockbuster from Ford against Woods, which was pushed onto the mat by Dawkin’s shoulders and then pinned.

Bobby Lashley prevailed against Sami Zayn. Zayn had repeatedly sought a way out of the match, but eventually found himself in the hurt lock and gave up.

Another highlight was Sasha Banks and Asuka. For the first time ever, Sasha Banks landed a pinfall win over Asukaif only with a fast roller. A success for the SmackDown Women’s Champion.

BYE WITH THE GOOBLEDY GOOKER

Not only the Undertaker turned 30 with this Survivor Series, also the mascot “Goobledy Gooker”, who came out of the egg 30 years ago. The gooker quickly became the 24/7 champion that evening. But after falling for a trap by Akira Tozawa, the turkey was soon rid of its belt. In the end, however (as so often) R-Truth laughed, rolling Tozawa up and flapping his belt away.

The next Pay-Per-View will take place on December 20th: WWE TLC is also the last major event in 2020.

These were the details of the news Roman Reigns vs. Drew McIntyre ends in chaos for this day. We hope that we have succeeded by giving you the full details and information. To follow all our news, you can subscribe to the alerts system or to one of our different systems to provide you with all that is new.